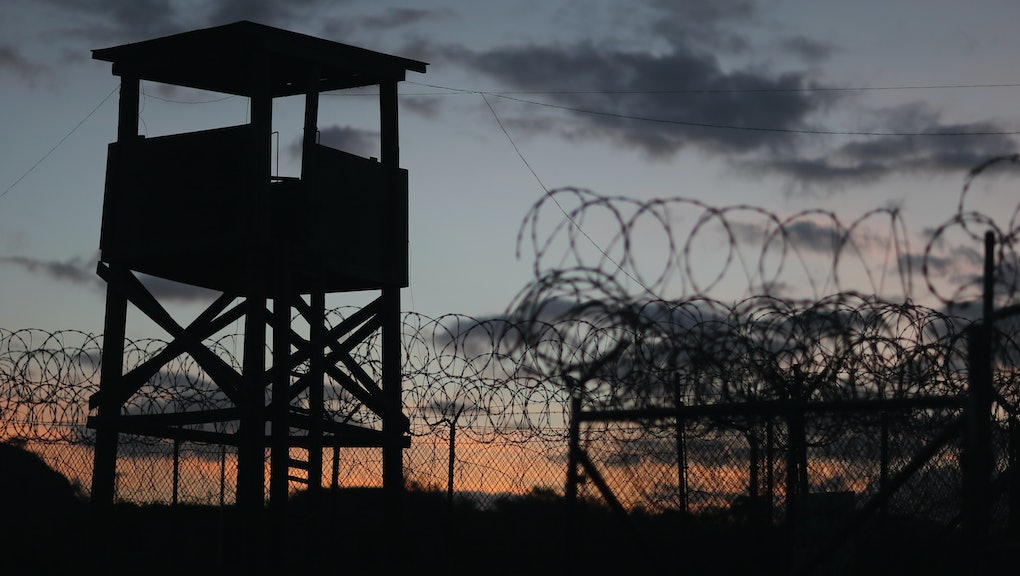 Forget Sugarplums — This Senator Only Wants You Dreaming of Terrorists Tonight

'Twas the night before Christmas, when all through the house was terrorism, terrorism, OMG terrorism!

It would appear that Sen. Tim Scott (R-S.C.) spent the waning days of the advent calendar Christmas week not at cookie swaps, but reworking Clement Clarke Moore's classic poem A Visit From St. Nicholas into a cautionary tale about the horrors awaiting Americans if President Barack Obama successfully closes the terrorism detention center at Guantanamo Bay. Naturally!

"And what to my wondering eyes should appear/ But a site assessment team with locations to volunteer/ With a neighborhood, a school, a church close enough for the terrorists to use," Scott — or more likely, one of his staffers — wrote. "They whistled and shouted and called them by name/ 'Now Charleston! Now Colorado! Now Kansas, let us choose!'"

It's not just liberals, though, who will cringe at Scott's craftsmanship. Poets too, will note that Scott's rhythm and meter are all off, and his poem was not copyedited.

"But I shall speak a word, and go straight too [sic] work, to ensure that Congress is on the alert," it reads. "The costs are too high and the risks are to [sic] great/ the answer is simple, there is no debate."

Scott probably meant the poem to be interpreted in good fun, but it's also part of a larger project among national security hawks to terrify Americans about the prospect of domestic terrorism. They've been particularly focused on the threat posed by people, who let's just say, don't exactly celebrate Christmas, despite the fact that right-wing terrorism is at least as great or greater a threat to public safety as radicalized Muslims.

Both kinds of terrorism, by the way, pale in comparison to other threats like gun violence or falling in the shower.

Arguably, resistance to closing the prison at Guantanamo Bay — which has been linked to countless human rights abuses and detains prisoners indefinitely without trial — has less to do with actual public safety and more to do with, in the words of the New York Times editorial board, "preserving Guantanamo's travesty."

And according to Scott's fellow South Carolina Sen. Lindsey Graham, there's no answer to the Gitmo question. "This is a war without end," he told the Times. "You don't release prisoners until the war is over. I would argue the war is in many ways just starting."

War without end is, apparently, what Scott and some of his colleagues are stuffing in America's stockings this year.

But if you're asking — we'll take a lump of coal.