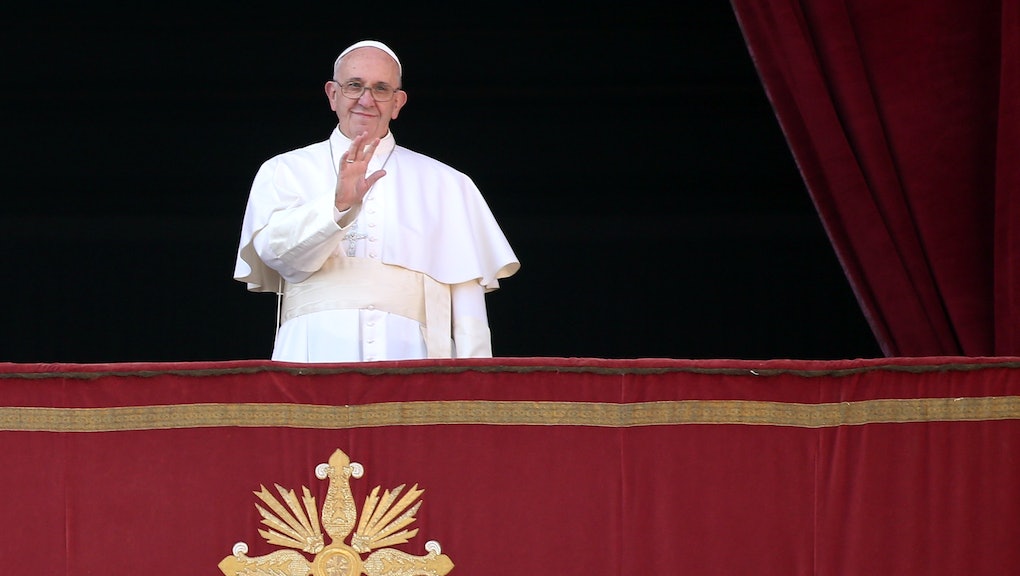 Pope Francis addressed well-wishers from the Vatican during his third annual Christmas message. In the speech, known as the "Urbi et Orbi" (to the city and the world), the pontiff praised countries opening their doors to refugees and called for renewed dialogues between Israelis and Palestinians.

"Precisely where the incarnate Son of God came into the world, tensions and violence persist, and peace remains a gift to be implored and built," he noted, according to Reuters, adding that those who took in the afflicted were helping them to "build a dignified future for themselves and for their dear ones, and to be integrated in the societies which receive them."

Numerous media outlets reported long lines and tight security, with the renewed threat of international terrorism looming over the proceedings. In keeping with the overall tone of the sermon, Francis also spoke of a larger need for peace.

"Only God's mercy can free humanity from the many forms of evil, at times monstrous evil, which selfishness spawns in our midst," Francis said, Reuters reported. "The grace of God can convert hearts and offer mankind a way out of humanly insoluble situations."

In addition to those hot-button issues, Francis showed himself to a be a virtuoso of civil conflict, referencing strife in Colombia, Iraq, Yemen, Burundi, Ukraine, South Sudan and the Democratic Republic of Congo, the BBC reported.

The dark themes of Francis' address are nothing, however, if not reflective of the times. In November, terrorist gunmen of the Islamic State group massacred at least 129 people in Paris. A gunwoman involved in the San Bernardino, California, shooting which left 14 dead was also inspired by ISIS. The attack was the worst spasm of mass violence in the United States since the 2012 attacks on Sandy Hook Elementary School. Terrorism from the group or others inspired by it have convulsed regions from Lebanon to Nigeria to Australia.

With the Syrian civil war now entering its fifth year, an estimated 9 million have fled their homes as a result of the violence. Often risking their lives in long and dangerous voyages, many of the displaced have poured into Europe. The continent, already reeling from preexisting economic pressures, has strained to keep up. While wealthier nations like Germany, France and Britain have all promised to take in ever-greater numbers, poorer countries along the continent's east like Hungary and Poland have balked.

In the United States, President Barack Obama has moved forward with a plan to resettle 10,000 Syrian refugees by the end of 2016 and has committed the United States to accepting 100,000 refugees overall as of the end of fiscal year 2017. The president's determination has come in the face of strident opposition by states who have argued that the refugee screening system is not sound enough to weed out potential terrorists. Those claims have, however, been refuted by current and former State Department officials with intimate knowledge of the process, who told Mic the system was both robust and exhaustive.

While the pope has no official power to influence policy on any of these issues, as leader of the world's 1.2 billion Roman Catholics, his voice remains a powerful moral force that has the potential to move the needle on any of these conflicts. Whether he will do so in 2016 remains to be seen.