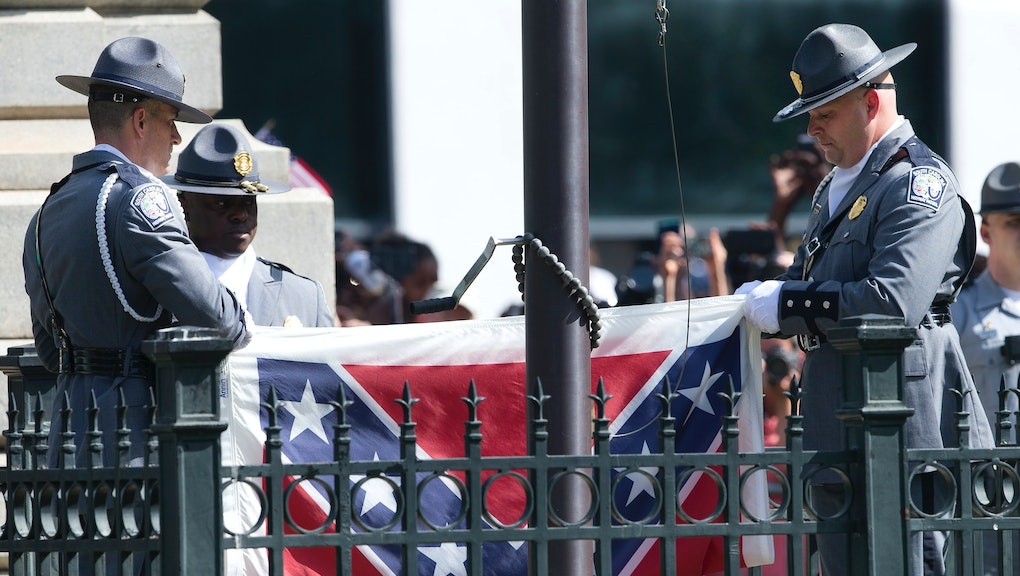 Following the Confederate battle flag's removal from the South Carolina state Capitol building in July, Gov. Nikki Haley told NBC the flag's proper place was in a museum. According to Jezebel, the agreement at the time stipulated that it would be housed in the State Museum's Confederate Relic Room and Military Museum Commission; that move could cost the state some $3.6 million, the Charlotte Observer reported.

"Just putting it in a box won't settle a controversy that has gone on," Relic Room director Allen Robertson told the Observer. "We are the institution to resolve this. And this is a solution to resolve the problem as best we can."

Which apparently means throwing money at the problem. Because the Relic Room is, in Robertson's words "busting at the seams" with artifacts from the Old South, space is at a premium. A display befitting of the flag and its troubling heritage was initially estimated to cost upward of $5 million, and according to the Observer, included:

- The construction of a spectacular showcase with a price tag of around $400,000

- Provisions for the creation of a garden, in which visitors could sit and reflect on the flag's splendor in $500,000 comfort

The Relic Room employs of four full-time staffers and $860,000 annually, the Observer reported. Its commission plans to display the flag in the so-called Congaree Room, a 4,600-square-foot space that sits above the Relic Room, expanding the museum by about a third of its current size. The flag would also merit the addition of a classroom and an event space, plus a new staircase so that admirers can access it all. These comprise what the Observer called a "new wing," one which would expand the museum's floor plan by about a third of its current size and, apparently, solve the space problem.

The revised proposal will need approval from the state legislature, which deemed the original budget a little too extravagant. Republican Rep. Chris Corley called it "irresponsible" for a state that needs to repair both its roads and lingering flood damage. Even the newer, slightly more reasonable expenditure on the preservation of a flag that, for many, symbolizes a legacy of racism is "still too much" in his view, according to the Observer.

"This is a payoff," Corley said. "You take the flag down and then all of a sudden you're going to put this huge amount of money into the Confederate Relic Room. It's a trade-off, and I do not like doing business like that."

But the commission contends that its plan meets "both the letter and the spirit of the resolution that removed the battle flag" from its Capitol building home in July, according to the Observer. The legislature will deliberate in January.