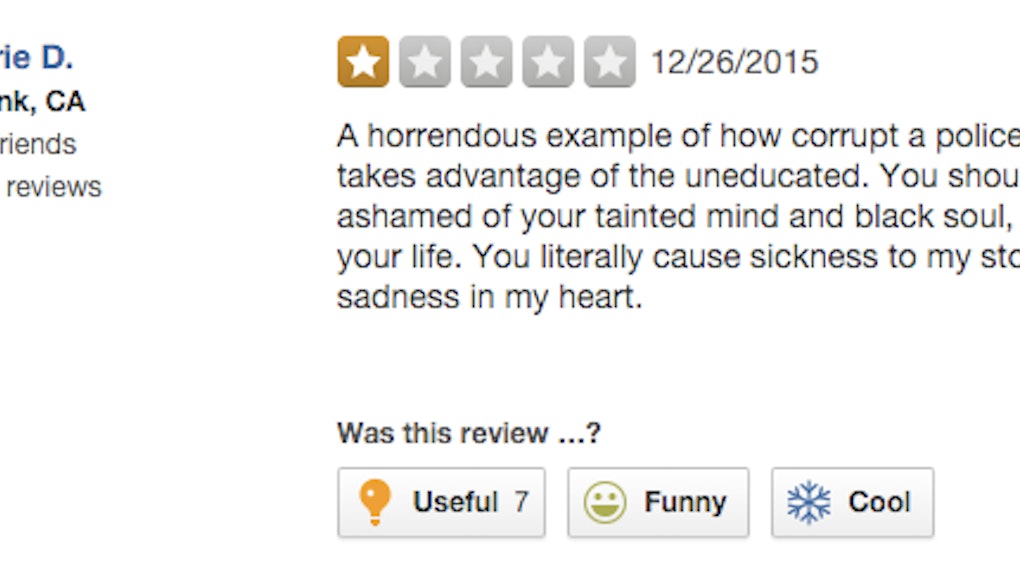 Prosecutor From 'Making a Murderer' Getting Bad Reviews on Yelp

Yelp does, on occasion, devolve from helpful and handy restaurant finder into the grim epicenter of internet rage. It's a place where people feel free to voice their most impassioned feelings — about restaurants, dry cleaners, Wisconsin law offices. As BuzzFeed reported, the Kratz Law Firm — presided over by Ken Kratz, former district attorney and villain of the popular Netflix docu-series, Making a Murderer — is taking a verbal beating on Yelp.

"I have never wished death on anyone in all the years I have had on this earth," one Yelp reviewer wrote of Kratz. "But after seeing how you treat people, I got pretty darn close. I hope that you get an incurable STD and spend the rest of your short life in constant misery, you fat sloth."

Who is this guy and why does Yelp hate him? Until 2010, Kratz was the district attorney for Wisconsin's Calumet County; he resigned when sexually explicit text messages he'd been sending his client — the victim of domestic abuse — came to the public's attention and prompted other women to come forward with similar stories of sexual harassment by Kratz. His law license was suspended for four months in 2014 as a result.

The sexting scandal certainly hasn't won him any stars from reviewers, but it's his more recent role on Making a Murderer that's attracting most of the internet's ire. The Netflix documentary recounts the story of Steven Avery, a Wisconsin man who spent 18 years in prison after he was wrongfully convicted of sexual assault in 1985 at the age of 22. The conviction seems to have been the result of a grudge held across various tiers of the Manitowoc County criminal justice system, rather than of solid police work.

DNA evidence exonerated Avery in 2003, but his good name didn't remain unsullied for long. When a photographer went missing in Manitowoc in 2005, Avery's fortunes soured. He was eventually charged with murder and given a life sentence after what many believe was a fishy investigation and less-than-fair trial. Kratz, the prosecutor on the case, has called his depiction in the series "unfair."

Talking to BuzzFeed about the barrage of threatening messages he's received about the Avery case, Kratz said, "Well over 90% are insulting, filled with profanity and at least half hope some personal tragedy befalls me and/or my family. Very troubling."