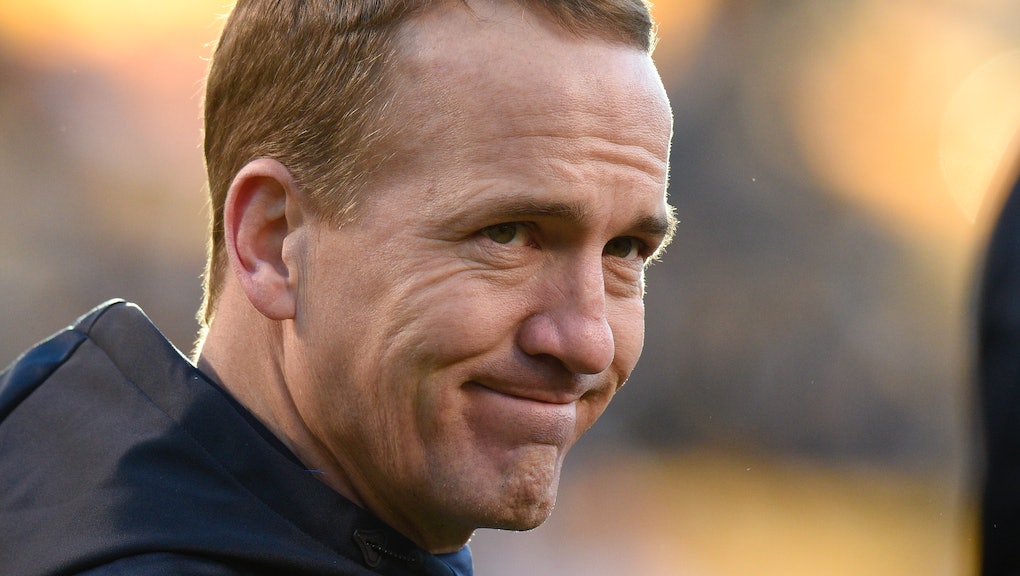 'The Dark Side': How to Watch Documentary Allegedly Linking Peyton Manning to Doping

Al Jazeera Investigates released a new report titled "The Dark Side: Secrets of the Sports Dopers" on its Al Jazeera English YouTube channel Saturday, focusing on the links between worldwide sports leagues and performance-enhancing drugs. NFL player Peyton Manning, whom a former employee of an Indiana-based anti-aging clinic in the report claims to have been linked to several interstate shipments of growth hormones after undergoing neck surgery and missing the 2011 season, has already come out denouncing the accusations.

"The allegation that I would do something like that is complete garbage and is totally made up," Manning said in a statement. "It never happened. Never. I really can't believe somebody would put something like this on air," he continued. "Whoever said this is making stuff up."

The report is available via YouTube, ahead of its scheduled airing Sunday night, according to Deadspin. About 40 minutes into the report, Charlie Sly, identified by Al Jazeera as a pharmacist once employed by the Guyer Institute in Indianapolis, is seen in an undercover recording describing how his office would send multiple shipments of human growth hormones to Manning's wife, Ashley:

"Him and his wife would come in after hours and get IVs and shit. So one thing that Guyer does is he dispenses drugs out of his office, which physicians can do in the United States. It's just not very many of them do it. And all the time we would be sending Ashley Manning drugs. Like growth hormone, all the time, everywhere, Florida. And it would never be under Peyton's name. it would always be under her name. We were sending it everywhere... it'd go to Florida... Almost all drugs you can prescribe off-label. GH is one of the few drugs, it's really the only drug you cannot prescribe off-label. It has three indications."

The Denver Broncos has also since come out in support of Manning, writing in a statement according to the Huffington Post:

"Knowing Peyton Manning and everything he stands for, the Denver Broncos support him 100 percent. These are false claims made to Al Jazeera, and we don't believe the report.

Peyton is rightfully outraged by the allegations, which he emphatically denied to our organization and which have been publicly renounced by the source who initially provided them.

Throughout his NFL career, particularly during his four seasons with the Broncos, Peyton has shown nothing but respect for the game. Our organization is confident Peyton does things the right way, and we do not find this story to be credible."