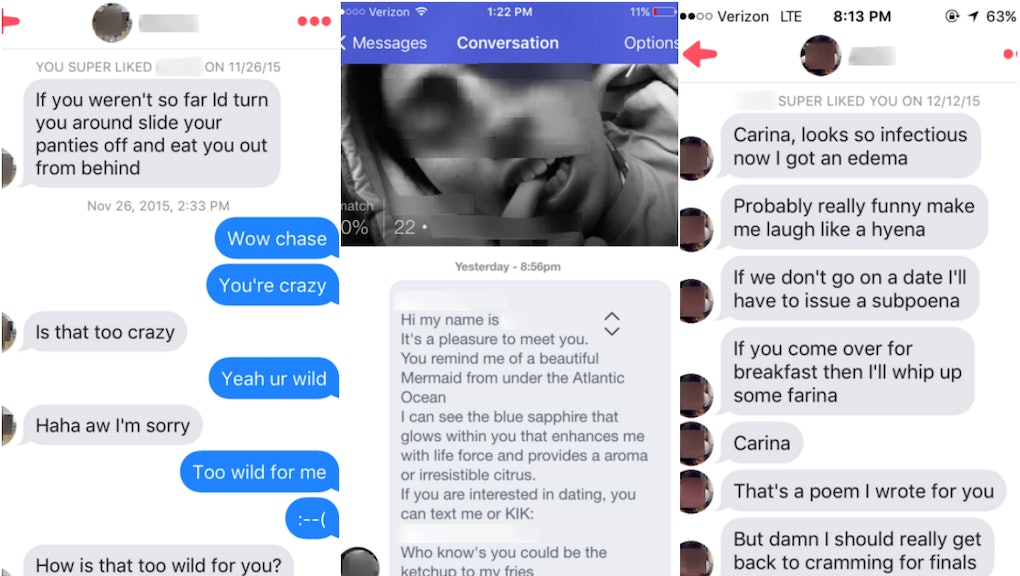 Despite its cultural saturation at this point, online dating is still tricky for a large percentage of the population. "Is this picture of me stunning but also an accurate depiction of how I look?" you asks yourself while creating the perfect online profile. "Do I need to pretend I'd take Infinite Jest to a desert island to attract a dude who reads?"

To help the gentlemen of the Internet better navigate the treacherous waters of Tinder, Mic asked Yvonne K. Fulbright, a sexuality educator and sexologist, to analyze guys' personalities based on their online pick up lines. The results were... illuminating.

As the year comes to a close, let this be a call to all potentially swiping men out there: Here's what works and what really, really doesn't.

Dr. Yvonne Fulbright: "This guy needs to work on his command of the English language. No gal wants to be described as 'smoky' (vs. 'smokin')."

"He thinks he's being funny, but almost comes across as critical/passive aggressive."

"He starts out well, but then becomes super assumptive and pushy. In letting his needs be known, he's also stating that he doesn't want to waste a lot of his time, but puts the cart before the horse. It's also like he's skipping over the e-seduction phase."

"Guys who use 'baby' as a term of endearment right away tend to be those who objectify women. While it conveys attraction, it also sets a power dynamic right from the start."

"This is a very cliché compliment, and doesn't involve a lot of creativity. He's taking the easy way as far as seduction goes."

"This is a really nice approach. It seems genuine, while casual."

"A really sweet message that can hook almost anybody. People have trouble resisting flattery."

"This person is trying too hard, and making comments that feel like pick up lines, since it's tough to make these assessments of a person via this kind of technology."

"Terrible. Expressing your interest in another shouldn't involve the word 'edema.'"

"Only someone with anger issues and very low self-esteem would automatically go to that level. Totally unacceptable to handle rejection that way. Cease all contact immediately!"

"He's all about the action, and may even be going after shock value. He's screening who is really down with him just wanting sex, and the kind of sex he wants, versus something more."

"Be careful with abbreviations/acronyms, since some may not know what these mean."