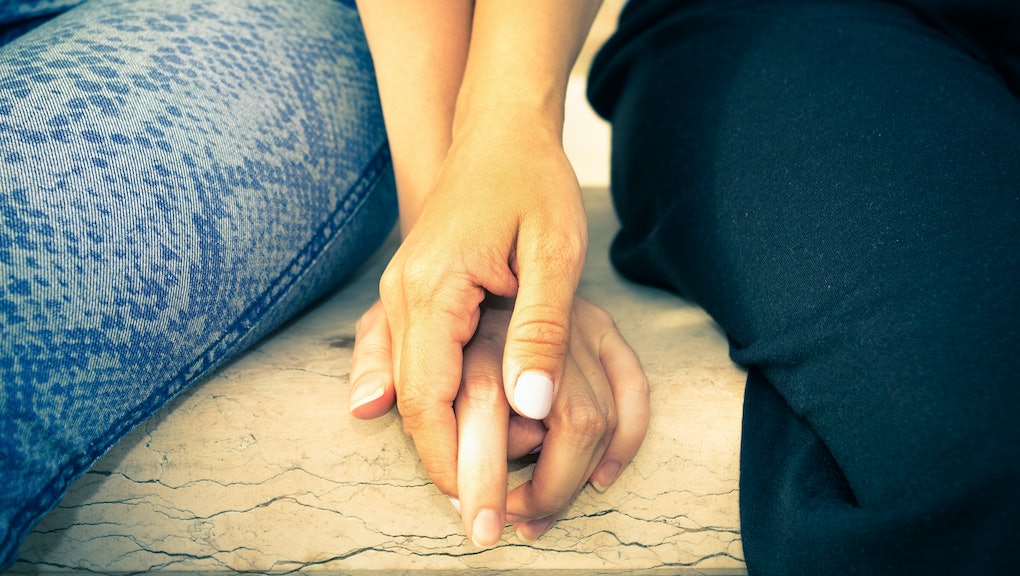 The internet exploded with criticism last year when Lorde posted a photo of her and her boyfriend. Then, in July, a selfie of a random couple at a wedding went viral — for the same reason. What do Lorde and an average woman have in common that caused such a stir?

They're dating men who are seemingly less attractive than them. Yes, that's it.

"Was this supposed to make me feel something?" Lorde classily responded to her relationship haters. But while she asked it rhetorically, it begs a real answer. Why as a society are we so obsessed with couples in which one partner is significantly attractive than the other? And why are we so intent on pointing it out?

While hotness is obviously both a shallow and a subjective attribute — especially when it comes to matters of the heart — the truth is there are couples who are "mismatched" in terms of attractiveness, and it's harder to talk about face to face than to gossip about online. So Mic asked the couples themselves: What's it like, and why do we care so much?

Generally speaking, we tend to be drawn to people who are equally or more attractive than us.

"It is in our human nature to try to obtain the best possible partner," Gary W. Lewandowski Jr., department chair of psychology at Monmouth University and co-creator of the website Science of Relationships told Mic. "The trial and error process of trying to obtain these partner[s] (i.e. dating) helps us settle into a match."

To be crass, say you were a 7 out of 10 on the attractiveness scale. You may ask out people who are more attractive to you, but the people most likely to date you are also around a 7. "The fancy name for all this is assortative mating," Lewandowski said.

Supposed "mismatches" may be more common than we're willing to admit, though. In Match.com's 2012 annual survey, 33% of men and 43% of women said they've fallen in love with someone they didn't initially find attractive. There's also truth in the saying that beauty is in the eye of the beholder. In 2011, OkCupid published data that shows that women's attractiveness rankings are often split, with women who get "1" and "2" attractiveness ratings (on a five-point scale) also receiving a high number of "5" ratings. So much for consensus. That's because...

Attraction is more subjective than we may admit.

Personality plays a huge role in attraction. Take Addie, a 23-year-old from the San Francisco area. She's been the more attractive partner in a two-year, on- and -off-again relationship, and her partner is older and overweight.

"I'm attracted to his passion for music," Addie told Mic. "He's a successful guitarist in a touring band, and we have so much in common. We clicked the first time we hung out, and I've never had a lousy time with him."

Two studies from University of Texas at Austin have supported the idea that we become more attracted to people once we like their personality — and less attracted to hot people if they turn out to be jerks. One study of 167 couples found that couples who were friends before they dated were much more likely to be "mismatched" physically, while those who started dating within a month of meeting tended to be equally attractive.

"I'm attracted to my partner's beautiful heart and mind," Indra, a 24-year-old from Indonesia, told Mic. "He's one of the kindest and most considerate souls I've ever met, and a huge plus is how well he... get[s] along with my family and understand[s] my background. I must confess my boyfriend and I do recognize that he's not my fantasy of tall, dark and handsome, but he's perfect for me in every other sense."

Plus, dating someone hotter than you isn't as glamorous as it may seem.

While there's nothing inherently at issue in "mismatched" relationships, problems can arise if one person believes their partner is more attractive.

"A large mismatch between partners can influence communication within the relationship," Sean Horan, assistant professor of communication studies at Texas State University, told Mic. "But it's not the mismatch itself at fault, it's the perception of the mismatch on either side, which can cause insecurity. Research shows that when you think your partner is of a higher 'mate value' than you are, you're more likely to be jealous. But you're also more likely to forgive that person."

Megan, a 22-year-old living in Austin, has experienced this insecurity in relationships with less attractive partners.

"My girlfriends would tell me that I could do better constantly," Megan said. "I usually ignored them, but there were times when hearing that repeatedly made me doubt my choice and feelings. It caused me to overthink and notice little things I wouldn't have otherwise."

But the worst part wasn't her own doubt, Megan said, but her boyfriend's insecurity.

"The worst part is that my partner believed that there was a large gap in attractiveness," she said. "He became extremely overprotective after he overheard a girlfriend say, 'You're too cute for him,' when we were in a spat."

Addie has also dealt with comments that have made her partner insecure and threaten the relationship.

"My family, friends and co-workers have all commented that I could do better," she said. "On numerous occasions, he's brought up the fact that I could easily leave him for a younger, more attractive guy... It definitely puts strain on our relationship."

It also means being held to certain standards, as Chloe Sexton wrote for XoJane in 2013.

"Even the people closest to you, who usually tell you what an amazing and beautiful girl you are, will frequently remind you just how lucky you are to go out with someone so handsome. ... You'll come under scrutiny too — people will wonder what's so amazing about you that you managed to land a boy whose looks are so superior to yours."

In an ideal world, Sexton wrote, "a relationship is not a see-saw whereby the less attractive partner has to make up for it by being exemplary in some other field to be equally balanced."

Yet there's a reason we're judgmental of mismatches — especially when it's a man with a less-hot woman.

If attraction is so mysterious, why do we freak out so much when we see mismatched couples?

"It's really funny that we have such strong reactions to this," Horan said. "One possible reason is that we're just not used to it... We don't like uncertainty, so anecdotally speaking we're harsh on the relationship because we don't understand it — even though it may be a beautiful love."

We also judge it especially when the mismatch challenges gender norms. Plenty of TV shows and movies feature fat or slobby men with supermodel wives. But when was the last time you saw a TV couple where the guy was way hotter? (Just recall the reaction when Lena Dunham's character on Girls slept with Patrick Wilson.)

"I suspect the reaction is harsher when the woman is less attractive than the man," Lewandowski said. "That type of mismatch is more jarring because it goes against the gender stereotypes we have about women and their focus on physical appearance. If a guy is unattractive and the woman is attractive, we may assume he makes a lot of money."

While women are expected to look for a mate who can provide for them — financially and emotionally in addition to physically — men are expected to choose a mate based on appearance. (One study even argues that relationships are positive and more supportive when the woman is hotter than her husband.) When an attractive men dates an unattractive woman, it threatens more than just our certainty in how the world works — it overturns gender roles as well.

The takeaway? Unlike what apps like Tinder seem to imply, love isn't just a game of appearances. So if you're looking for love, it's important to do more than just look.

"In a mismatched relationship, you probably don't view that person as less attractive," Horan said. "If you're genuinely attracted to this person, it's not an issue. The only issue that could arise is your perception of the mismatch, which can cause insecurity. And there can be insecurity on both sides. You can be in a relationship where both people think they're the less attractive partner."

"Mismatched" relationships are just as valuable and loving as any other — so please stop commenting on them.

This article was originally published on Jan. 5, 2016