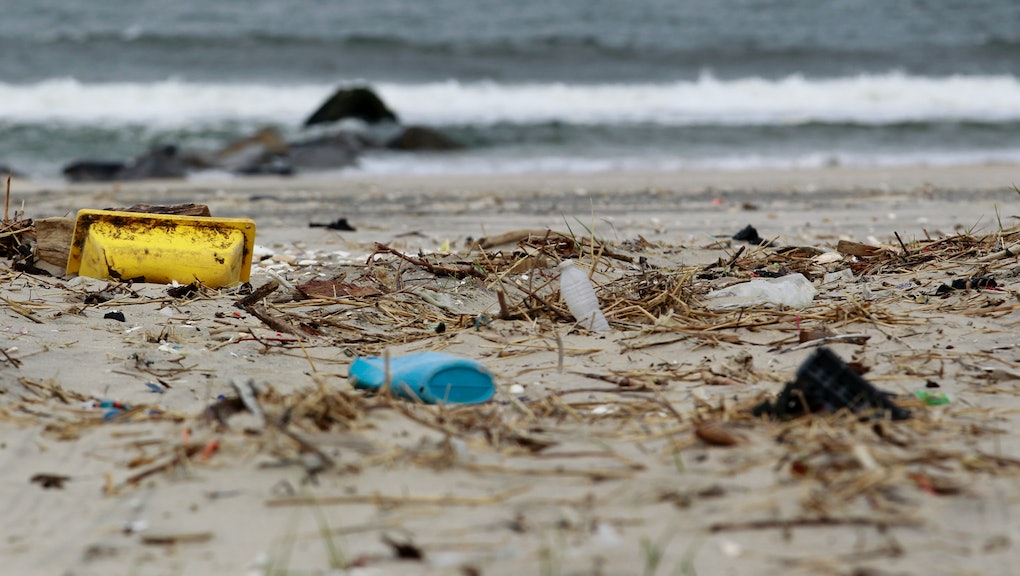 Andrew Turton and Pete Ceglinski were disheartened by the amount of plastic and other garbage they saw floating in the ocean. So the Australians invented an ingenious way to suck it up. They'd eventually quit their jobs to make it happen.

The Seabin is a garbage can that attaches to a floating dock. Using the power of a pump, it sucks in polluted water. As the water flows through the pump and back out into the ocean, trash like plastic water bottles, shopping bags and paper gets trapped in a "catch bag" made from natural fibers. There's even a mechanism for filtering out liquid pollutants like oil and detergent.

The device is designed for relatively calm, controlled waters such as marinas, ports, rivers and lakes — places that aren't susceptible to the storms of the high seas.

Turton and Ceglinski are trying to fund the Seabin on Indiegogo. They've raised nearly $190,000 of their $230,000 goal, with a little under three days left to go. But they're determined to bring the Seabin to fruition: "We've quit our jobs, we've taken all our money, we're putting our heart and souls into making this happen," Ceglinski says in the campaign video.

How bad is the problem of ocean garbage? There are 5.25 trillion pieces of plastic garbage in the ocean, according to recent reports. Parley for the Oceans, an organization that works to protect our oceans, estimates there are 40 million pounds of plastic floating in the North Pacific alone.

Floating plastic is hugely detrimental to marine life, including whales, birds and turtles. As indicated by this National Geographic story about a whale who died after ingesting a DVD case, animals often mistake the plastic debris for food. When that happens, the plastic can obstruct their digestive systems, causing them to starve and die. In other cases, the debris causes the animals to choke or ruptures their stomachs.

All that ocean plastic is hard to clean up because it isn't all floating on the surface. "Pieces of plastic are distributed vertically, through the water column," the National Resources Defense Council says on its website. "Plastic breaks down into tiny particles in the ocean, making cleanup efforts very difficult. One of the many challenges of cleanup is how to remove the plastics from the ocean without also removing or damaging marine life."

While Turton and Ceglinski's Seabin won't tackle the Great Pacific Garbage Patch, it'll still help get debris out of the water.

The pair's first goal is to eventually recycle the plastic captured by the Seabins, and use it to make even more Seabins. The second goal, of course, is to create a world where there's so little pollution, Seabins aren't even necessary.

"Imagine that," Ceglinski says, "we have a pollution-free ocean for our future generations."