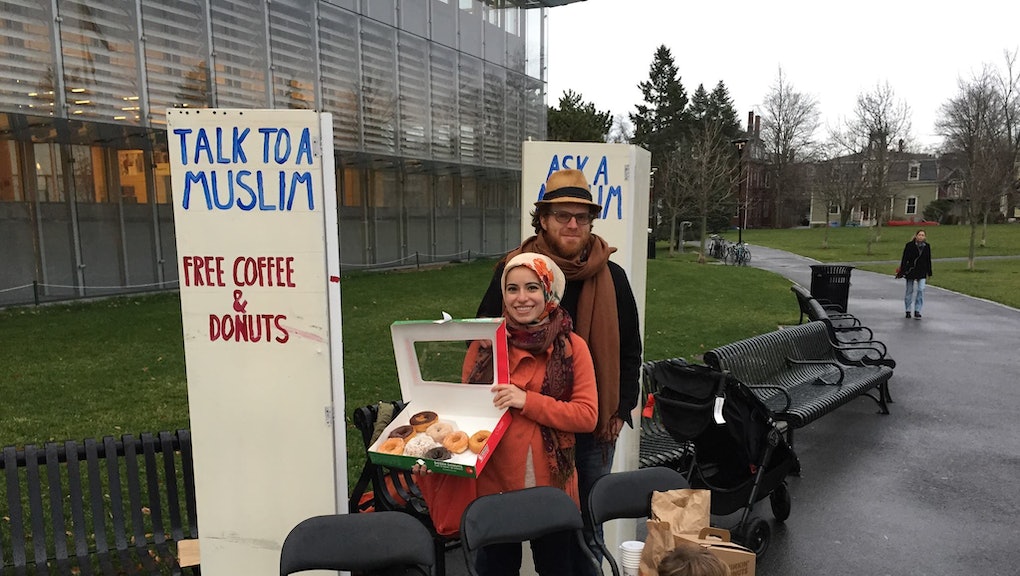 Very often, when faced with injustice, people will take a stand. Well, one woman decided to make a stand.

In a Facebook post, Mona Haydar described her decision to step out of her comfort zone and into the public. Armed with a box of doughnuts and coffee, Haydar constructed a stand outside a library in Cambridge, Massachusetts, with signs saying "Talk to a Muslim," "Free coffee and donuts," "Free conversation" and "Ask a Muslim." Her husband, Sebastian, created the signs.

Haydar wrote that "Thanks for doing this" was the most common sentiment she heard, while some people apologized for the current wave of Islamophobia gripping the nation.

In December, there's been at least one case of suspected arson of a U.S. mosque, several cases of people leaving severed pigs heads in the U.S., Australia and the U.K. One Alabama mosque was scared to open a tin of Christmas cookies, fearing it may be something sinister.

In his address to the nation earlier in December, President Barack Obama pushed back against anti-Muslim policy proposals, including Donald Trump's proposal for a Muslim database and Sen. Ted Cruz's proposal to help only Christian Syrian refugees.

"It is our responsibility to reject proposals that Muslim Americans should somehow be treated differently," Obama said.

The idea came to Haydar and her husband to create a stand to foster community and dispel myths one night over dinner, NPR reported.

"He had seen this segment on This American Life, where a young Iraqi man had done 'Ask an Iraqi,' " Haydar told NPR. "And so [Sebastian] was like, 'Why haven't we thought of this before? Why don't we get out and talk to people?'

Haydar did say that some people took coffee and doughnuts without conversation, while some stopped to discuss their various religious backgrounds.

"One woman was on the verge of tears and wanted to know when we were coming back so she could bring a box of doughnuts for us to give out," Haydar wrote in her Facebook post.

Haydar said the day had a clear lesson:

Keep your heads held high, dear Muslim family. The world is a good and beautiful place with small pockets of hatred here and there. There is an overwhelming amount of love and so remember this post when you are faced with bigotry and hatred towards you or your faith. Remember that you have supporters too. When you are faced with difficulty, remember that ease is right around the corner. Remember that you are as American as apple pie. And I ask you now, since we did this in Cambridge right near the cafe where in Goodwill Hunting Matt Damon asks, "How bout them apples?" How about em?

As of press time, the post has over 20,000 shares and 1,600 comments. While most comments were positive, some did have anti-Islamic sentiment.

In a Facebook post, Haydar responded to people who sent her messages asking about her personal religious beliefs. She then summarized them:

"Love and positivity can permeate and subsume even the most intense hatred! Jesus Christ taught me that! I have great hope for our world! I feel giddy and inspired at the prospect of our more beautiful world! Love will conquer all! I believe in the power of love and all those who teach me how to embody and practice it regardless of who they are/were or where they come from!"