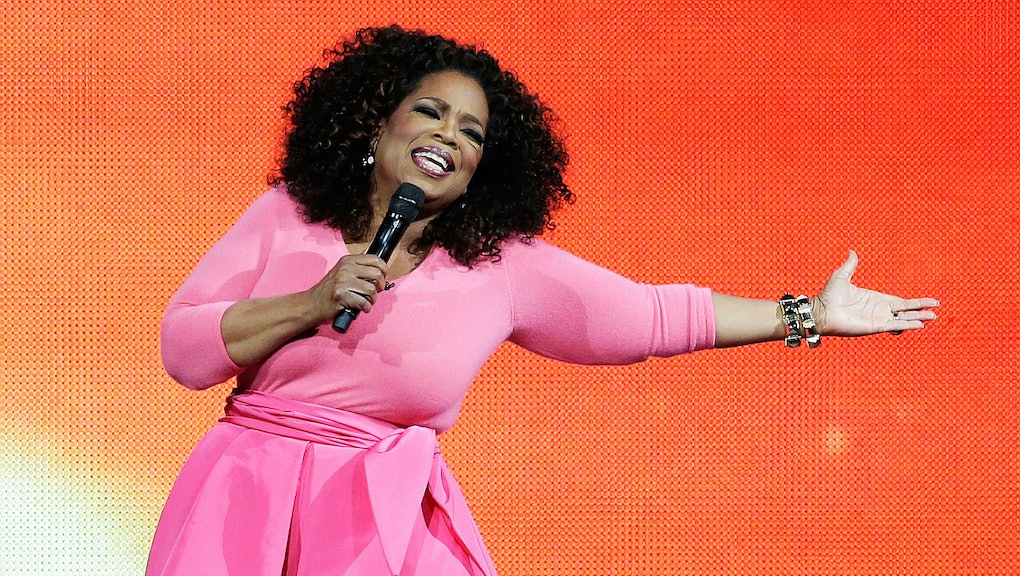 9 Ridiculous Facts About How Rich Oprah Winfrey Is

Oprah Winfrey is rich. Really rich. From books to TV networks to magazines to home and gardening, Oprah's brand has just about invaded every corner of American life, and the queen of media certainly has the bank account to show it.

Forbes puts Oprah's net worth at $3.2 billion, an impressive feat for a once-local news reporter who worked her way up the media ladder to one of the most successful daytime talk show hosts, with her hit show, The Oprah Winfrey Show, that aired 25 seasons, from 1986 to 2011.

Here are 10 ridiculous facts which not only speak to just how rich Oprah is, but also provide a glimpse at how far her power and influence in the media extends:

1. These people have Oprah to thank for their careers.

Oprah is so wealthy, she can simply choose to make her closest confidants rich and famous as she pleases. From Suze Orman, Iyanla Vanzant, both Dr. Phil and Dr. Oz, Gayle King and Rachael Ray, Oprah has not only surrounded herself with an eclectic group of professionals, but is largely responsible for their commercial success thanks to her constant touting of their products, whether they're cookbooks or shows providing counsel, according to ABC.

2. Oprah is handed $70 million when she decides to go on a diet.

Weight Watchers stock doubled in less than a day when it was initially reported that Oprah was putting a 10% stake in the weight loss company, purchasing upwards of 6 million shares in stocks and being handed an additional 3.5 million for signing on to a contract with the group. "The massive jump is a tangible sign of the weight still carries with investors and consumers," USA Today reported when the announcement came in October. "The sum's so large that it would pay Winfrey's Weight Watchers monthly membership fee of about $43 for 1.6 million months or buy her about 28 million Weight Watchers meals."

3. Oprah can turn paper into gold.

Not only does the queen of media pick up the pen herself, with several of her own commercially successful books, but Winfrey even created her own long-running and highly credible Oprah's Book Club. USA Today described the TV host as "America's most popular reader," estimating sales on the 70 books included in her club total roughly 55 million copies, according to a Fordham University marketing professor who notes most authors included in the grouping aren't major authors to begin with.

4. When Oprah picks up the pen, it's only for big bucks.

Oprah is planning on writing another book, this time co-authored by her personal trainer, and might have received the highest advance payment from a book contract in history, according to the Academy of Achievement.

Her most recent book, What I Know For Sure, was an immediate New York Times bestseller in October 2014.

5. She was ranked the highest-paid celebrity — not once, but four times in a row.

Forbes ranked Winfrey as the world's highest-paid celebrity four years in a row, from 2008 to 2012. The publication reported she earned a cool $165 million in the final 12 months of her four-year consecutive reign on the list, thanks largely to her production company, Harpo; several major cable TV shows she's involved in; as well as her several other media outlets, from her magazine to her satellite radio station.

7. She could fund her cable TV network for another 20 years, entirely out-of-pocket.

Even if Oprah's fledgling cable network channel slips and slides in ratings, the queen of media shouldn't have anything to worry about. OWN was originally allocated upwards of $100 million to get the network up and running, an amount which Winfrey's Harpo production company apparently exceeded before its 2011 release. Still, with Winfrey's vast net worth, she could maintain the network with $150 million in production and overhead costs per year for another 21 years entirely out-of-pocket, if she so pleased.

8. Her net worth is greater than the total GDP of several countries.

Oprah has earned more money than all the economic activity in several countries is capable of producing each year, including the Central African Republic, Grenada, Guyana, Maldives, Samoa and St. Lucia, according to the latest World Bank data.

9. Your fave's net worth comes nowhere close to trumping O's.

For one person to acquire in a lifetime, $3.2 billion is a whole lot of money. To put it in perspective with other leading black female artists and actresses, Beyoncé, Forbes' 49th-ranked self-made woman compared to Oprah's at No. 5, falls way behind Oprah when it comes to accrued wealth. Her net worth of $250 million in 2015 isn't nearly as vast as Oprah's, and even after combining with her's husband's net worth, the power couple pale in comparison to Oprah.

In fact, Oprah has well over three times more wealth than the queen and king of the music industry.