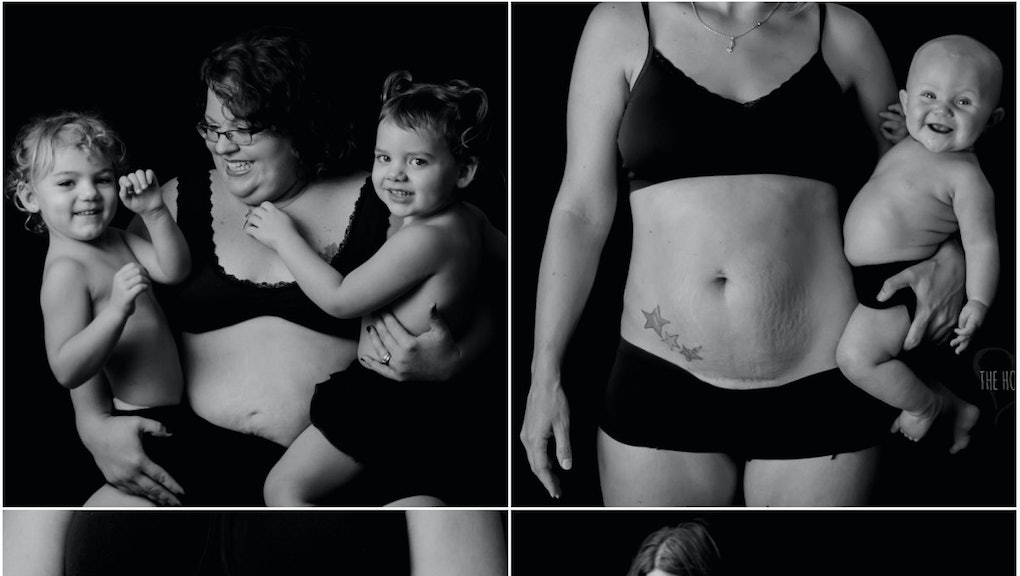 Mental illness has historically been considered a taboo subject. But thanks in no small part to celebrities like Jennifer Lawrence, Lena Dunham and Lady Gaga sharing their struggles with anxiety and depression, people are increasingly opening up about their struggles with mental health disorders.

But even though the conversation surrounding mental health grows louder, it's still difficult conceptualizing what mental illness looks like. How can one make sense of a condition that takes place entirely in people's heads?

As founder of the Honest Body Project, a body-positive photo series, photographer Natalie McCain is trying to put a face to an invisible disease. That's why she's launched "The True Faces of Depression," a photo project meant to showcase what it actually looks like to be a mom struggling with mental illness.

The black-and-white photos depict young children with their mothers, all of whom have a mental illness in some form. One woman, for instance, talks about being sexually assaulted when she was 19, resulting in a lifelong struggle with self-mutilation and post-traumatic stress disorder. Another discusses her struggles with postpartum depression.

Most of the women in the series have sought some kind of treatment for their mental health disorders, be it talk therapy or medication or a combination of the two. In accompanying interviews, they speak frankly about their struggles with mental illness, as well as what it's like to grapple with the stigma associated with having an invisible disease.

"Depression is as real of a disease as cancer. If someone tells you they have cancer, you don't doubt them and tell them it's in their head," one mother writes. "I wish that mental illness didn't carry this stigma."

In an email to Mic, McCain said she was inspired to launch the project while speaking to mothers she'd previously shot for her website. "While photographing mothers for The Honest Body Project, a common part of their stories is their struggle with various mental illnesses," McCain wrote. "I wanted to create a series that focuses on this to help show how there are so many women struggling with this and they don't necessarily 'look' depressed.

McCain added that she also wanted to demystify mental illness and encourage women to speak openly about their struggles. "Most people struggle in silence, which is so hard to do," she told Mic. "I wanted to inspire people to speak up and break the silence."

Many of the mental illnesses discussed by the women in McCain's series are extremely common. According to the Anxiety and Depression Association of America, nearly 40 million adults grapple with some form of anxiety, constituting about 18% of the country's population. Some conditions, such as generalized anxiety disorder and panic disorder, are particularly common among women, who are twice as likely to be diagnosed as men.

That said, mothers in particular are discouraged from speaking openly about their struggles with depression and anxiety, due to the cultural pressures placed on women to be "perfect" wives and mothers. One of the recurring themes in McCain's photo series is how this cultural pressure discourages women from speaking out about their mental health issues, making them feel isolated and alone.

McCain herself has personal experience with mental health issues. "After having my son I struggled severely with postpartum anxiety, which I didn't even know was possible since it is so rarely spoken about," she told Mic. "I found bits of of my story and struggle in each woman. If we all opened up about our individual struggles, we would all relate to each other on a deeper level and be able to offer advice and support."

That's why McCain highlighted mothers' narratives as a way to ensure other women that they are not suffering in silence.

"Do not feel like you have to suffer alone. Reach out to someone you trust and tell them how you are feeling. Do not be afraid someone will think you are an unfit mother because you are feeling these things," one woman wrote.

"There are a ton of people out there who WANT to help you through this! And remember to take one day at a time. It does get better!"