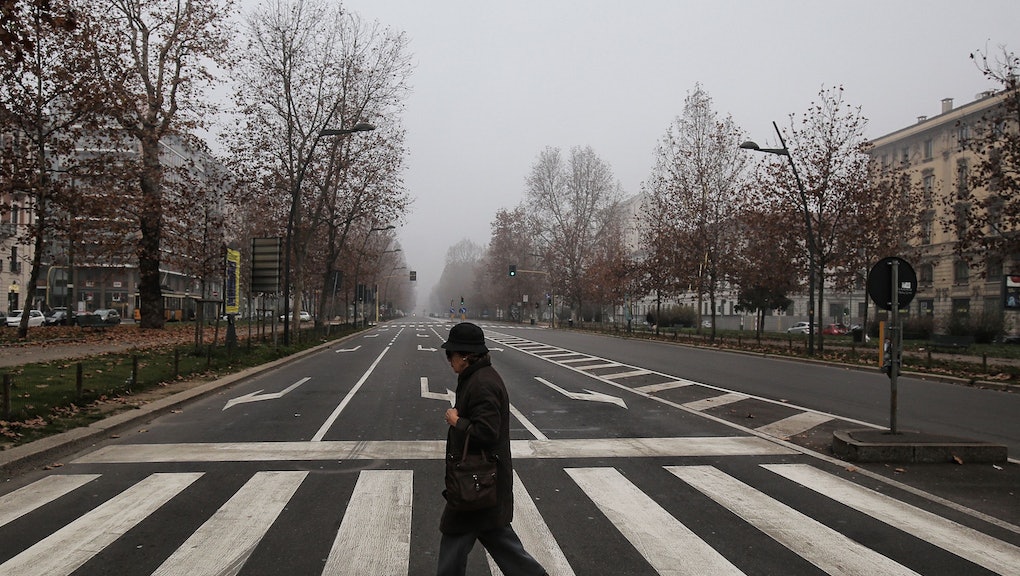 When envisioning the future of transportation, images of flying cars once abounded in the public imagination. But for Milan, the prospect of no cars — at least temporarily — seems more likely. On Monday, cyclists and pedestrians flooded the streets of the Italian city during a six-hour ban on private cars taking place from 10 a.m. to 4 p.m. through Wednesday.

According to the Associated Press, 30 consecutive days of air pollution exceeding healthy limits, along with a "lack of rain and winds" throughout the country, prompted the ban. Other major Italian cities are doing their part to reduce their vehicle emissions, with Rome allowing limited drivers on the road based on license plate numbers and Florence placing restrictions on the traffic to its historic sights until the new year.

Smog levels have reached critical levels in other parts of the world, and companies are capitalizing on it. Recently a Canadian company called Vitality Air sold China a record amount of their bottled fresh air. Their cofounder reported that a sample shipment of 500 bottles sold out in less than two weeks.

For now, Milan's citizens are getting a breath of fresh — or at least fresher — air the old-fashioned way. And though a six-hour car ban in one of the world's busiest cities may seem like a pesky inconvenience, studies show it's well worth it. In the European Environment Agency's 2012 report, Italy ranked first among 40 European countries for most deaths due to air pollution.

When Milan Mayor Giuliano Pisapia announced the ban last week, he said in a statement translated by the BBC, "In these days of major emergency, we cannot remain indifferent."