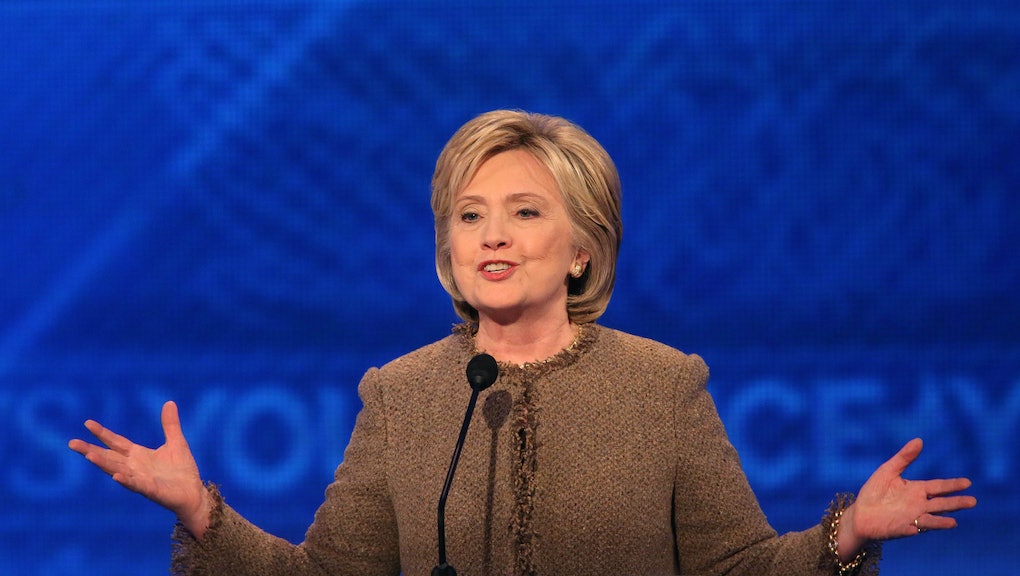 Former Secretary of State Hillary Clinton is pro-choice, a supporter of criminal justice reform, a defender of the Affordable Care Act and committed to protecting LGBT rights, according to her campaign site. What else is there to know about Clinton and her platform? Well, for one, she probably isn't much like your abuela, according to some Latino voters. She's been labeled hawkish in her stance on Syria.

She's also, as everyone knows, the Democratic frontrunner for the 2016 presidential election. Here's where Clinton stands on a few of the biggest issues in the upcoming presidential race: immigration, gun control and climate change.

If elected, Clinton would support "comprehensive immigration reform that provides a full and equal path to citizenship," her website says. She would protect children who immigrated to the U.S. as children and their parents from deportation, supporting President Barack Obama's DACA and DAPA acts, and she would institute what her campaign calls "humane, targeted immigration enforcement" by preventing the detention of people who come to America in "desperate situations" and by shutting down private detention centers. Her website also states that she would work to make affordable healthcare available to everyone, including immigrants, and that she would make it easier and less costly for eligible citizens to gain naturalization.

The frontrunner has had a few awkward moments centering on the subject of immigration. In November, she owned that her use of the phrase "illegal immigrants" was "a poor choice of words." Clinton classified Donald Trump's insinuation that Mexican immigrants were rapists as a disappointment, but she isn't immune to the occasional foot-in-mouth moment when it comes to minority voters. She recently compared herself to a universal abuela in a bid for the Latino vote, sparking a #NotMyAbuela response on Twitter. But she's chastized Jeb Bush for his use of the term "anchor babies," and following Donald Trump's Dec. 7 remarks on his desire to keep Muslims from coming into the country, Clinton tweeted that "demonizing Muslim Americans" runs contrary to the values upon which the nation was founded, and has come out as a supporter of refugees' and Muslim immigrants' rights.

On gun control: "I refuse to accept this as normal," Clinton tweeted in response to the Dec. 2 shooting in San Bernardino. "We must take action to stop gun violence now."

Clinton has long been a proponent of gun control: Her website says that, in her time as FLOTUS, she worked to institute background checks in the wake of the Columbine shooting; as a senator, she supported a bill that would close the gun show loophole and voted to hold gun manufacturers and dealers responsible for their negligence in cases of gun violence. She also promoted "legislation to extend and reinstate the assault weapons ban."

As president, Clinton would continue with many of these initiatives: her plan for putting an end to gun violence includes expanding background checks, repealing immunity from prosecution enjoyed by gun makers, cracking down on straw purchasers, preventing people with a history of mental illness and perpetrating domestic abuse from buying guns and bringing back the ban on assault-style weapons. In November, Democrats pushed Obama to put Hillary's plan in motion. In December, the White House was finalizing an executive action that would close up the gun show loophole and mandate background checks on gun purchases. She would not allow people on the no-fly list to buy guns, either.

She has established two objectives as part of her energy plan: to install upwards of half a billion solar panels nationwide by 2020, and to "generate enough renewable energy to power every home in America within ten years," according to her website. As the New York Times reported, Hillary's campaign has estimated "the cost of her clean electricity initiatives at about $60 billion over 10 years, which it said would be offset by ending tax breaks for oil and gas producers."

Following the conclusion of December's climate conference in Paris, Clinton praised both the deal and Obama for his role in negotiating it. Clinton's stance on climate change mirrors that of the president, whose programs she would largely protect; indeed, her campaign chair — John Podesta — was previously one of Obama's advisers, "with a focus on climate policy," according to Grist.

The candidate has taken some flack for what her opponents have called a changing position on environmental policy. For example, she backed the Keystone XL pipeline in 2010, and while she was cagey when questioned about her opinion of the project earlier this year, she ultimately came out against it in September, calling the pipeline "a distraction from important work we have to do on climate change." Obama ultimately rejected the proposal, too.