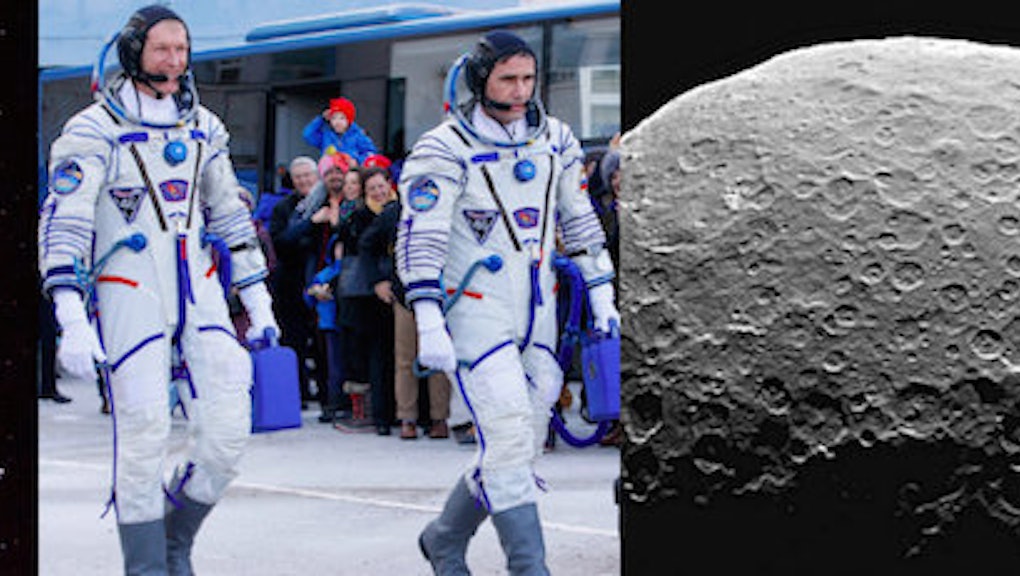 NASA News: Here Are Some of the Biggest Space Discoveries of 2015

2015 was quite a year for space exploration. NASA has several missions underway well above Earth's atmosphere, where the space agency is documenting the great unknown in ways previously considered impossible — thanks in large part to advances in technology, specifically in computational imaging and unmanned spacecraft.

All in all, it was a year of discovery and awe, as new insights and visuals into space provided unique glimpses into the less traveled corners of the galaxy — not to mention a few close encounters. Luckily for Earth, several asteroids just missed our planet, including the notorious "Great Pumpkin" responsible for the near-Earth Halloween 2015 freak out.

Below are some of the biggest discoveries of the year to sum up just how brilliant space exploration has been throughout 2015.

Between the Curiosity rover, the Phoenix lander and other projects, NASA's been making some truly exciting discoveries about Mars. Perhaps one of the most surprising discoveries this year came in the form of evidence of liquid water on the planet's surface.

"Using an imaging spectrometer on MRO, researchers detected signatures of hydrated minerals on slopes where mysterious streaks are seen on the Red Planet," NASA stated in a September press release. "These darkish streaks appear to ebb and flow over time. They darken and appear to flow down steep slopes during warm seasons, and then fade in cooler seasons. They appear in several locations on Mars when temperatures are above minus 10 degrees Fahrenheit (minus 23 Celsius), and disappear at colder times."

"Who would have expected a blue sky in the Kuiper Belt?" NASA's New Horizons lead investigator Alan Stern said in a statement after the spacecraft flew past Pluto in early October, documenting a glowing blue haze within its atmosphere. "It's gorgeous."

NASA's New Horizons is on a unique mission to document Pluto. "That striking blue tint tells us about the size and composition of the haze particles," researcher Carly Howett added in the space agency's statement. "A blue sky often results from scattering of sunlight by very small particles. On Earth, those particles are very tiny nitrogen molecules. On Pluto they appear to be larger — but still relatively small — soot-like particles we call tholins."

3. Saturn's Enceladus moon has an ocean.

It was initially assumed Enceladus, one of Saturn's 62 moons, was partly covered in ice, but researchers believed a small body of water likely existed on the planet rather than something as large as an entire ocean. However, after NASA's Cassini spacecraft picked up imagery of water geysers erupting across the moon's terrain, NASA concluded in September that there is, in fact, a gigantic ocean flowing somewhere on Enceladus' surface, Live Science reported.

Perhaps one of NASA's most controversial discoveries of 2015 came in the form of ice — lots and lots of ice, smack in the middle of Antarctica. The space organization concluded the total gains of mass ice growth in the region is actually steadily increasing, despite leading studies and organizations claiming the region has been losing more ice than growing, including the Intergovernmental Panel on Climate Change's 2013 analysis.

However, that isn't to say NASA is discrediting the agency or claiming global warming isn't happening. In fact, the organization questioned where sea level rises might be coming from considering its analysis concluded Antarctica is not yet responsible for increased levels, and stated the difficulty of measuring such observations in an October press release.

5. Earth is beautiful from a million miles away.

Humanity's first planet turns out to be one of the most beautiful visuals recorded in history from the NASA DSCOVR satellite, when it captured an image of Earth from 1 million miles away. The image not only speaks to the advancements and incredible depth in space humans have managed to explore in 2015, but also what is likely to come from another years of exploration in 2016.