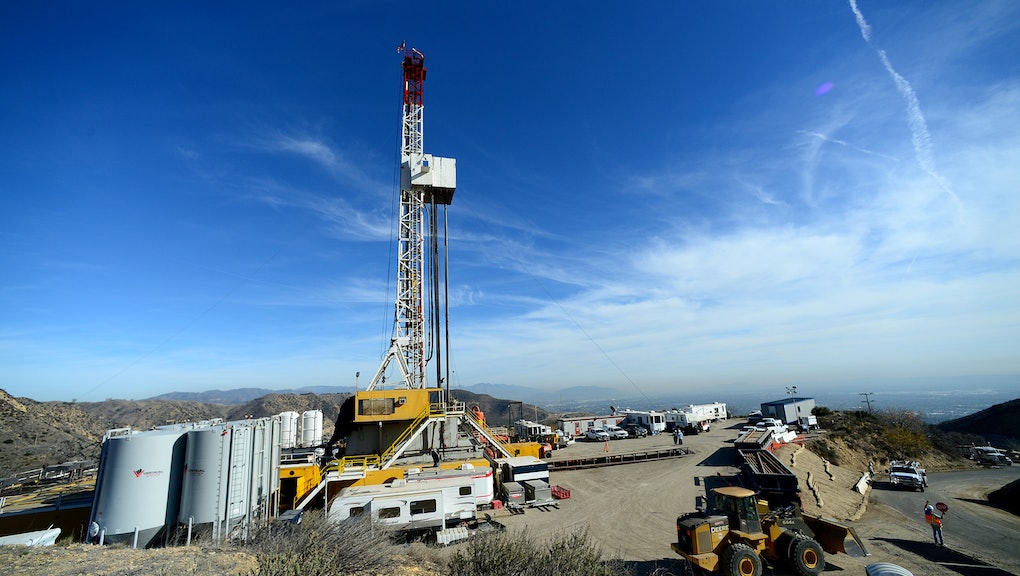 A blown SoCal Gas well 25 miles north of Los Angeles in Aliso Canyon has been spewing tens of millions of cubic feet of methane, a potent greenhouse gas, for weeks in what many are calling the biggest environmental disaster in the United States since the BP Deepwater Horizon oil spill.

Motherboard reports the gas is leaking into the air at a rate of 110,000 pounds per hour. The Environmental Defense Fund, an environmental advocacy group, notes "methane – the main component of natural gas – is a powerful short-term climate forcer, with over 80 times the warming power of carbon dioxide in the first 20 years after it is released. ... [The current rate of leakage is] the same short-term greenhouse gas impact as the emissions from 7 million cars."

The gas has been leaking since Oct. 23, and the company is still working on the problem.

According to Agence France-Presse, as of late December some 2,147 families have been relocated from the region while "hundreds more have left the area on their own." Residents reported symptoms including nausea, nose bleeds and illness, as well reported their quality of life was being ruined by the constant stench of the gas leak.

SoCal Gas spokesman Michael Mizrahi told AFP the leak will take several more months to repair, as the relief wells being drilled will need to bore to the bottom of the original well shaft that plunges 8,000 feet.

"SoCal Gas did not maintain their facility properly, leading to issues involving the health and safety of residents and the community at large," Matthew McNicholas, a lawyer who represents families displaced by the gas leak, told AFP. "They created the conditions allowing the well to fail, causing children and families to suffer."

The company believes it has located the source of the leak, according to the Los Angeles Times, but the only solution that remains is drilling the relief tunnel.

A recent report in L.A. Weekly seems to back that claim. The well in question had not been inspected by the state since 1976, three years before SoCal Gas removed a malfunctioning subsurface safety valve that could have prevented the methane from leaking into the atmosphere.