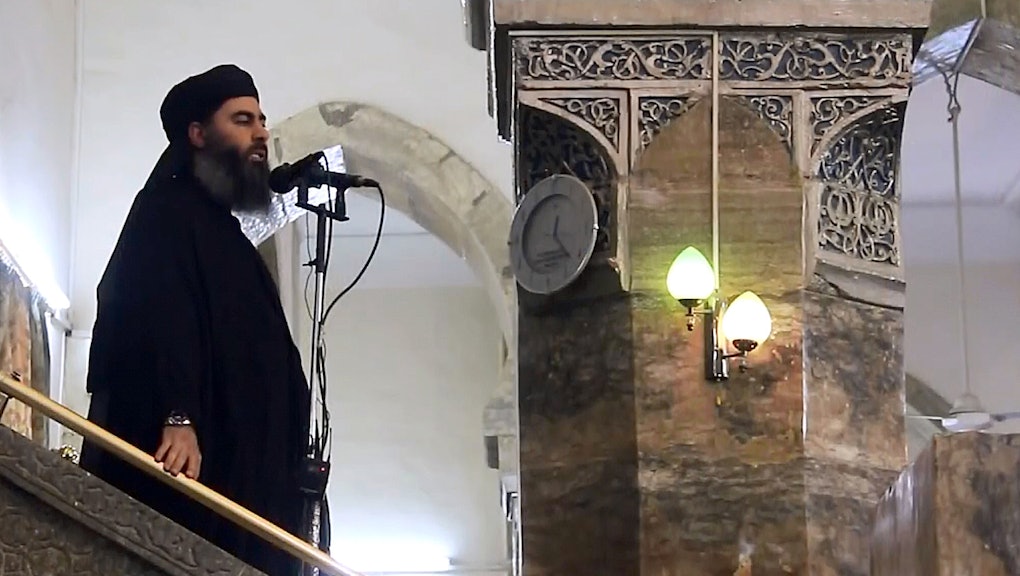 After ISIS Leader Called Muslims Everywhere to Terrorism, They Responded With Humor

Over the weekend, news emerged that the leader of the Islamic State group, Abu Bakr al-Baghdadi, had released a message to his followers. Delivered through ISIS-aligned social media accounts, the 24-minute audio address served as a rallying cry to Muslims around the world to join the cause and taunted the group's growing number of adversaries heading into 2016.

"Crusaders and Jews don't dare to come on the ground because they were defeated in Iraq and Afghanistan," he said, according to the Telegraph. "Be confident that God will grant victory to those who worship him, and hear the good news that our state is doing well. The more intense the war against it, the purer it becomes and the tougher it gets."

The call to the faithful, however, fell on deaf ears for most Muslims — if the response of Iyad El-Baghdadi's Twitter trolls are to be believed. El-Baghdadi, a prominent human rights activist, was originally mistaken by many online as an ISIS follower or al-Baghdadi himself, after he tweeted a number of the ISIS chief's messages, like this:

Only later did El-Baghdadi have to provide context to inform some members of the media he was not a terrorist leader.

"Perhaps the funniest/weirdest response was when ISIS supporters (I mean real ISIS supporters) were actually offended that I was mistaken for their great leader," he told Mic in an email. "I think that tweet is down coz the account must have been suspended after I brought attention to it."

The response to his tweets of the messages from ISIS was revealing. Rather than take up arms, rather than kill infidels, rather than enslave women, Muslims of Twitter said they had better things to do, like see Star Wars.

It wasn't simply about waging jihad against Kylo Ren or surrendering to Disney's slick marketing. Muslims and other happy trolls of Twitter in general responded with mockery to the Islamic State's call — proving the tweet can be mightier than the sword.

While the Twitter confusion offered an amusing venue for ISIS troll to go to town, the actual terrorist organization is said to be at a critical crossroads even as it had widened its scope of operations to a global level. On the ground, battlefield setbacks like the loss of Ramadi in Iraq and the free Kurdish stronghold of Rojava in northeastern Syria have brought increased pressure to bear. On both sides, the U.S.-backed Syrian Democratic Forces, one of the many regional groups contending for power, is reportedly inching closer to the ISIS capital of Raqqa.

Airstrikes from the United States and Russia have continued to pummel the group, denting oil revenues and even reportedly wounding al-Baghdadi in October.

The year 2016 will likely see the battle continue. With ISIS social media engagement a critical component of the group's operation, effective trolling has never been relevant.

In the meantime, El-Baghdadi is still pointing out that he is not, in fact, the terrorist leader you're looking for: