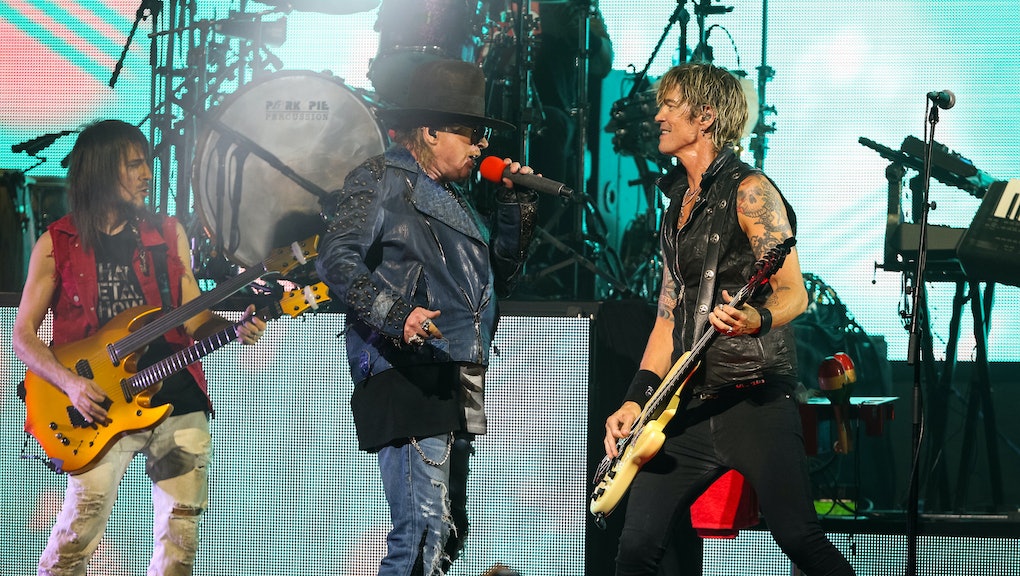 People are speculating that '90s rock band Guns N' Roses will announce a reunion tour after various signs surfaced online, including a new cover photo on its Facebook page and an update on its website. Fans also reported an ambiguous teaser has been playing at Star Wars: The Force Awakens showings.

"So, is this reunion a thing? Cuz I need to know if I need to sell everything for a ticket," one apparent committed fan commented on the band's recently updated Facebook page cover photo, uploaded on Christmas Day. "All I want for Christmas is Axl and the boys get back together," another Facebook user commented.

All signs point to a Guns N' Roses reunion: Their recent cover photo update is one of several signs pointing to a reunion. The official website homepage was updated with the Guns N' Roses original logo featuring, well, guns and roses.

An apparent fan and YouTube user uploaded a vague 15-second teaser of fans jamming to "Welcome to the Jungle" from past concerts:

Rumors of a reunion tour have been circulating since November when a "music insider" told Dish Nation that lead guitarist Slash and lead singer Axl Rose have been talking again after years of publicized feuding.

"Slash and Axl have verbally agreed to get things together again and reform the original band," the source told Dish in November. "The live shows is where they can show the world what they had and also make the greatest earnings." Slash left the band in 1996 after he and Rose failed to reconcile a publicized falling out.

At the time, the source told Dish official information would be leaked in the "next few days." Almost two months later, nothing but subtle hints have dropped. "Promoters are quietly working away to land opportunities," the source said in November. "Details of the reunion are expected to leak out in the next few days. Everyone is expecting huge demand for tickets, but the boys are very humble and are not sure what to expect."