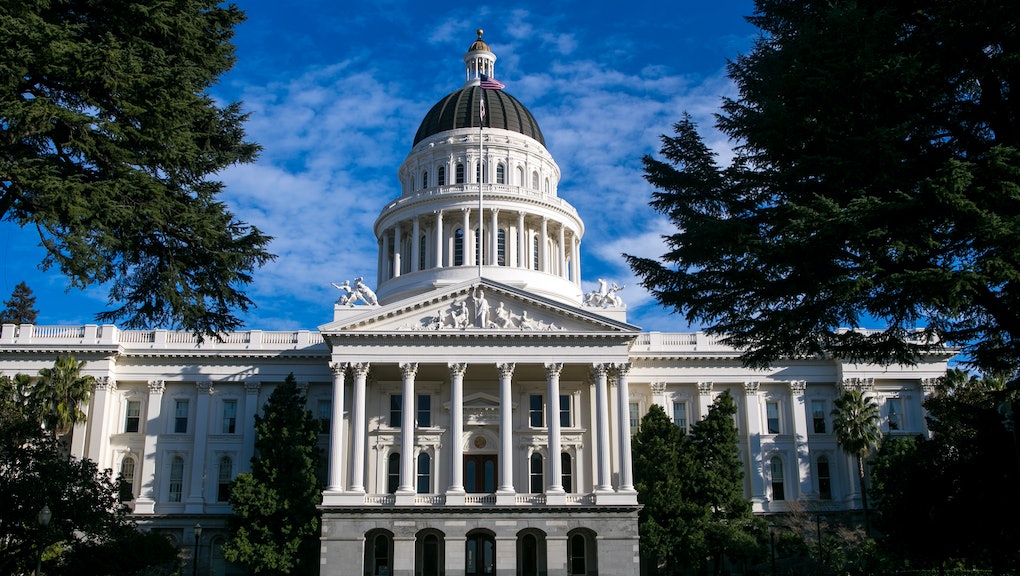 If you want to know who's given money to California legislators, you can easily search an online database and discover which corporations, unions and trade associations are bankrolling lawmakers' campaigns.

John H. Cox wants to make such information far more visible. Starting next month, the San Diego-area businessman and investor will begin gathering signatures for a statewide ballot initiative that would require legislators to wear the logos of their top 10 "sponsors" during public legislative sessions. The measure would also require candidates for office to list their 10 largest contributors in all campaign advertisements.

"If you came down from Mars and never had any knowledge of the American political system, you'd take a look at it, you'd sit there and shake your head in disbelief, because we have a system where people who want something from government fund the campaigns of the people who give them that stuff," Cox told Mic.

The campaign: Cox kicked off the "California Is Not For Sale" campaign in November, displaying cardboard cutouts of lawmakers affixed with their top donors' logos outside a county building in San Diego. The money-soaked political process, he said, has diminished voters' faith in the system.

"Wearing the logos of your sponsors is a little tongue in cheek, but it really is demonstrating that these people are bought and paid for by their sponsors," Cox said. "And everybody knows it. And frankly, the people who have really figured it out have done the only rational thing — that is, they've exited the electoral process. If you notice turnout, it's depressingly low. Why would you not turn out? Because you rightly believe that your vote doesn't really matter because frankly the people in Sacramento and most state capitals listen to the funders and don't really listen to what the people want."

In order for the measure to appear on the November 2016 ballot, Cox must collect 365,880 valid signatures from registered Golden State voters, according to the California Secretary of State's office.

But Cox wouldn't stop at making lawmakers wear donor logos. He said the initiative is the first phase in a "two-step process" to reform California government. In November 2018, he hopes to place on the ballot a "Neighborhood Legislature" initiative that would increase the number of legislators voters elect from 120 to 12,000.

Since its ratification in 1879, California's Constitution has provided for a legislature of 40 senators and 80 Assembly members, while the state's population has gone from more than 860,000 in 1880 to 38.8 million in 2014, according to figures from the U.S. Census Bureau. Cramming more and more people into Senate and Assembly districts, Cox said, means it's exceedingly expensive to run legislative campaigns, creating a system in which "the funders are really the ones in charge, not the people."

Cox has been pushing the Neighborhood Legislature plan for more than two years, encountering deep skepticism among experts on California politics. Corey Cook, then a professor of political science at the University of San Francisco, told the Wall Street Journal in 2013 that Cox's plan for 12,000 districts had all the makings of political gridlock: "That is a recipe for nothing ever getting passed ever."

But Cox told Mic his plan offered the only way to end the political stranglehold that concentrated interests hold in California; he identified energy companies, the financial industry, real estate and the state teachers' union as among the forces most responsible for "squash[ing]" voters.

To address concerns about the new legislature's size, Cox's website says the Neighborhood Legislature will have a "working committee of only 120," selected by the 12,000 representatives, responsible for "the brunt of the work." Cox sees his plan as a model for the rest of the country, he said.

A bigger problem: Advocates of campaign finance reform may share Cox's disgust with a megadonor-driven political process, but Stephen Spaulding, senior policy counsel and legal director at the pro-reform group Common Cause, said Cox is mistaken in seeing district populations as the crux of the problem.

"In my view, the size of legislative districts is not the primary culprit for the growing role of big donors in politics," Spaulding told Mic. He noted that one of 2014's most expensive U.S. Senate contests, the battle between then-Sen. Mark Begich (D) and challenger Dan Sullivan (R), took place in sparsely populated Alaska, where the candidates and allied groups spent nearly $61 million, according to the Brookings Institution.

"Rather, the primary culprit is the Supreme Court's 5-4 decision in Citizens United, combined with a lower court decision, SpeechNow," Spaulding said. "Those decisions sparked a fundraising arms race and empowered very wealthy Americans and corporations to play an outsized role in political campaigns. More and more money funding our elections is coming from a smaller, wealthier and highly unrepresentative segment of the electorate. That money comes with strings attached: access to lawmakers and, ultimately, influence over public policy."

The solution, Spaulding said, is a public financing and small donor matching system to "provide much-needed balance and lower the barrier to participation that all of this money represents." Cox, a self-described conservative Republican who has waged long-shot bids for the U.S. House of Representatives, the U.S. Senate and the presidency, rejects the public financing option on small-government grounds.

"The evil that creates this power in the funders is the size of the campaigns," Cox said. "If you just had the public finance the campaigns, these big funding groups of course will not be able to give money to the candidates themselves, they'll just spend huge amounts of money on independent expenditures and influence policy in that fashion. The public financing ruse is just that — it's a ruse that's meant to expand government even more while still not doing anything about the problem."

That view places Cox squarely at odds with many who might otherwise be natural allies in his fight against big money. But his primary focus, for now, is raising awareness of the issue through his logos initiative.

"The system is broken," Cox said. "This is a way to highlight it."