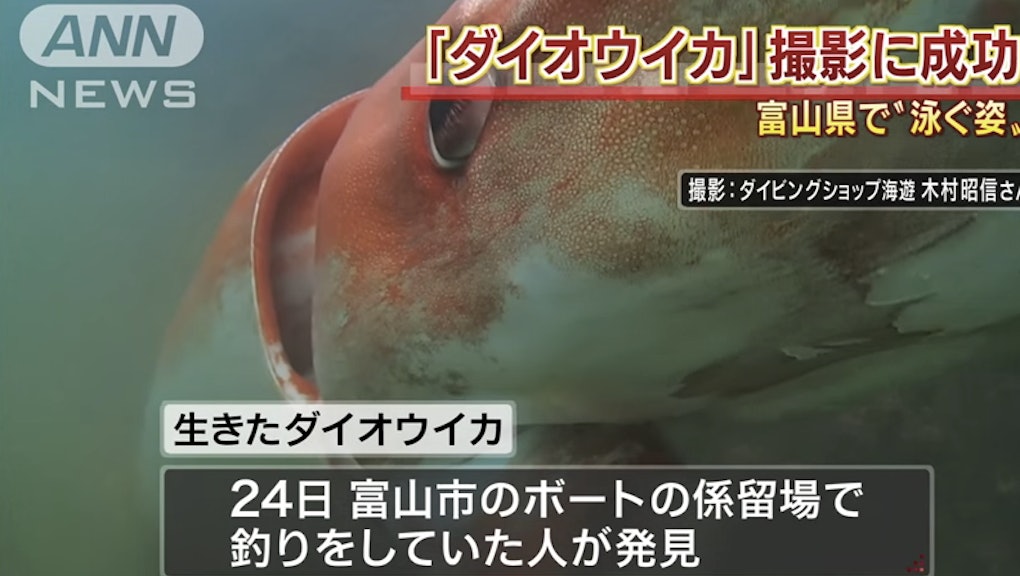 Last week, a giant squid gave the internet the gift of being caught on footage and shared on social media, providing a rare glimpse into the often mysterious depths of earth's oceans. The sighting took place off a pier in Toyama Bay, Japan, CNN reported. It was the first sighting of its kind for the fishing season, which started in November and ends in March, according to CNN.

The Toyama squid measured about 12.1 feet in length. Giant squid can reach up to 45 feet and are rarely such in such shallow waters.

The squid was eventually ushered back to more open waters, after being caught on camera by a submersible camera, CNN reported.

The first live sighting of a giant squid, which were once thought to be things of myths and legends, also took place in the Pacific in 2004, according to CNN. A giant squid measuring 23 feet long washed up in New Zealand back in May, the Huffington Post reported. It's eye alone measured 3.15 inches in diameter. The cause of death for the squid was unknown, but scientists estimated that because it didn't come from far away since its corpse was still fresh.

Giant squids weren't the only monstrous creatures to surface—sometimes literally, from the ocean— in 2015. Giant tortoises, stingrays and whatever oarfish are, decided to say hello this year.  Below are some images that can only make you wonder what's going to appear in 2016.

Earlier this month, a giant salamander estimated to be 200 years old was found in a Chinese cave, according to the Washington Post. Although the creature was 4.5 feet long and weighed 114 pounds, its species, which is the largest amphibian ever, can grow up to 6 feet. Salamanders are often called living fossils, are endangered, and are famous in Chinese myths, BBC reported.

In June, Annie MacAulay, CEO of Mountain and Sea Adventures, was taking some kids on a kayaking trip around Catalina Island in California when she stumbled upon an oarfish the size of three people, according to CNN. The fish, which is oar-like in shape, washed up dead. Usually, oarfish like to stay in the deep ocean, thousands of feet below the surface.

Maybe not as exciting as deep sea creatures, but scientists found a new species of giant tortoises in Ecuador's Galápagos Islands this year, according to National Geographic. There lives two, not just one population of giant tortoises on Santa Cruz island. They look similar on the outside but differentiate genetically. The new species is a hybrid, known as C. donfaustoi.

In August, a giant jellyfish was videotaped in the Gulf of Mexico, the Huffington Post reported. The video was recorded at a depth of 3,300 feet, but the cameraman remains anonymous. Scientists have confirmed the existence of the jellyfish for over a century, but it has only been seen about 115 times, according to the Huffington Post. For reference, the big bell-shaped head, known as the medusa, can grow up to 4.6 feet in width.

In March, ABC's Ocean Mysteries Jeff Corwin caught a stingray that measured 14 by 8 feet and weighed up to 800 pounds, USA Today reported. The stingray, which was caught in Thailand, was given a transmitter to be tracked.