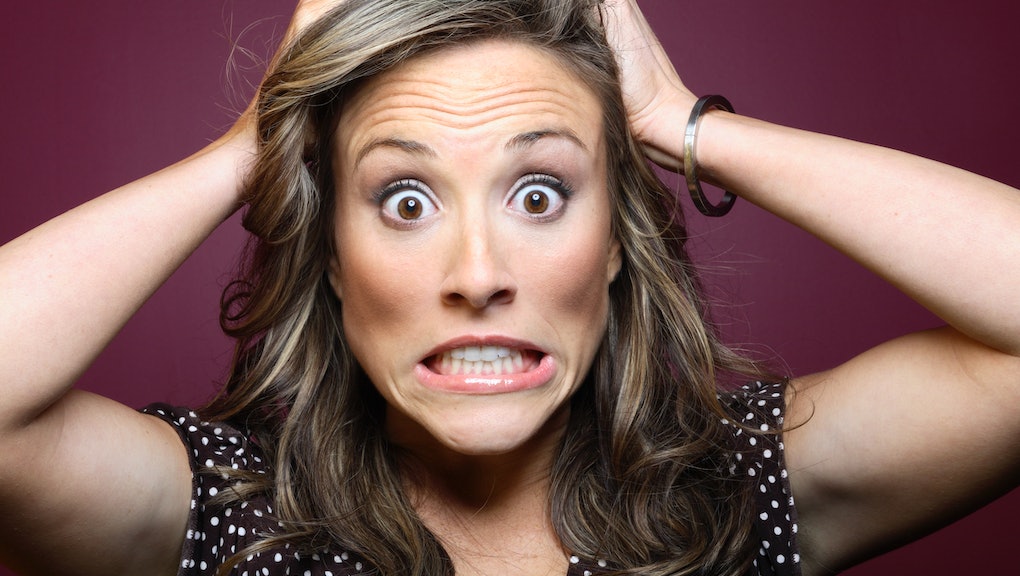 Your Anxiety Could Actually Save Your Life

Anxiety comes with a host of painful symptoms, from panic attacks to muscle tension to paranoia about what people think of you.

But anxiety might have some benefits too — and not just thanks to Jennifer Lawrence's encouragement. According to recent findings, having higher levels of anxiety could actually make you better equipped to recognize and respond to threats.

Humans use facial expressions to convey social signals. Looking at other people's faces is one way we detect potential threats to our wellbeing. An expression of fear on a friend's face, for instance, might signal the presence of danger.

In a study published in the journal eLife, researchers set out to discover how our brains process signals of threat from other people's facial expressions.

To collect their data, they monitored participants' brain activity while showing them images of angry- and scared-looking faces — negative emotions that typically signal danger. The faces exhibited a variety of gaze directions — some gazed to the side, while others confronted the viewer head-on.

The participants' brains responded more quickly when the images' gaze direction signaled a threat. When they were confronted with an angry-looking person gazing directly into their eyes, or a scared-looking person gazing to the size, their brains only took 200 milliseconds to respond — faster than when the respective images were gazing in different directions.

"In contrast to previous work, our findings demonstrate that the brain devotes more processing resources to negative emotions that signal threat, rather than to any display of negative emotion," said lead author Marwa El Zein, according to Medical Xpress.

Here's where anxiety comes in. Past research has indicated that anxious people have a so-called "hyper-vigilance" when it comes to registering threats: They have a hard time discerning between varying degrees of negative emotions and tend to "interpret ambiguous stimuli as threatening," as the researchers put it. (Overreacting to a friend's slight frown, or a period in a text message? We've all been there.)

Turns out, that might not be the case. The researchers found that anxious people do selectively respond to threats — just in a different, and perhaps more useful, part of the brain.

While low-anxiety people process threats in the temporal cortex, which handles facial recognition, high-anxiety people process threats in the motor cortex, which controls action. "This pattern of findings suggests that anxiety increases the relative contribution of the motor pathway during the processing of negative social signals," the researchers wrote.

That could mean anxious people are better equipped to respond quickly and efficiently to nearby threats.

The researchers don't yet know if the same findings apply to folks being clinically treated for anxiety. The trial participants' anxiety levels fell within the range of the healthy adult population, "leaving open the question as to whether clinically anxious individuals would similarly recruit their motor cortex in response to threatening social stimuli," the researchers wrote. Further research could help them find out.