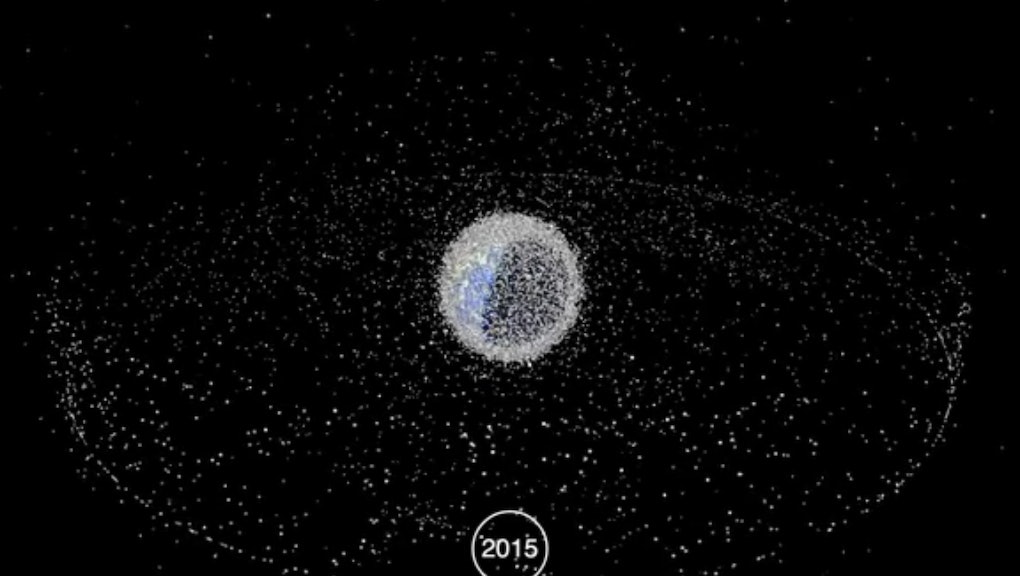 Space is big. Like, really big. But even with all that room, humans have managed to fill it with trash.

Thanks to Stuart Grey, a lecturer and astronomer at University College London, it's now possible to visualize how much trash is floating around in the great unknown. Perhaps unsurprisingly, since humans tend not to clean up after ourselves, there's a lot of it — bits of rocket, things coming loose from satellites and rubbish from accidental collisions.

Grey packs almost 60 years of space garbage into a minute-long clip, starting with the launch of the USSR's Sputnik in 1957.

By the time it gets to 2015, the animation depicts the world surrounded by floating space crap — nearly 20,000 pieces, according to Grey, who came up with his estimate based on location data from Space-Track.org, a site that provides information on what's floating around in Earth's orbit.

As Science notes, the number used to be much lower — around 9,000 objects — before 2007, when a Chinese ballistic missile test blew up and launched an additional 2,000 objects into space. And in 2009, a satellite collision chucked another 2,000 pieces of garbage out there. There are, according to Science, "entire rocket engines are lurking around up there."

That's one small piece of crap for man, one giant garbage pile for mankind, right, Neil?