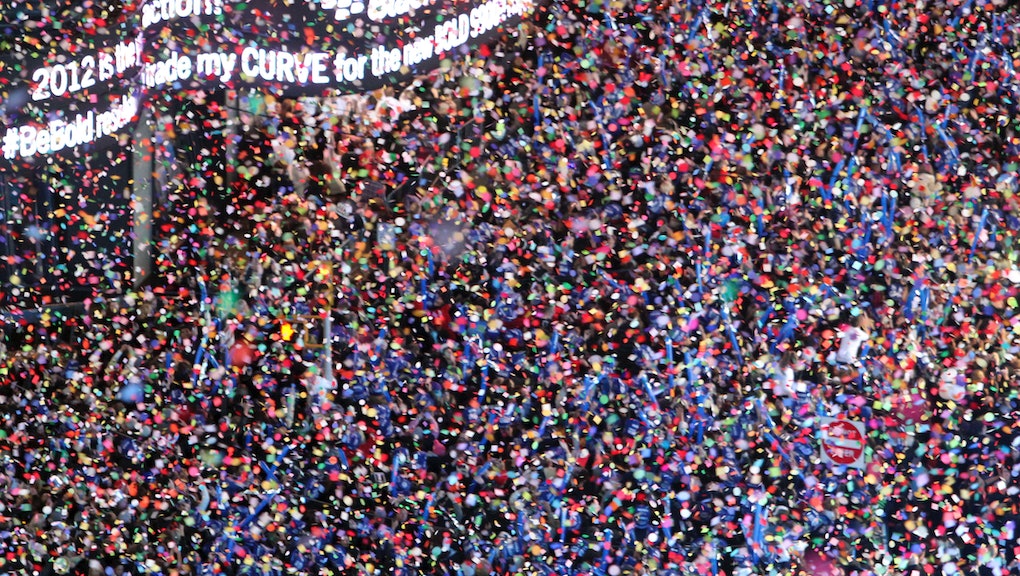 New Year's Eve Traditions and Superstitions From Around the World

The new year is upon us and as Americans prepare to toast 2016 with glasses of champagne and shout a collective countdown as the ball drops in New York City's Times Square, the rest of the world is preparing to fill the last ten-seconds of 2015 and very first moments of 2016 with a variety of traditions that may be familiar to some and foreign to others.

Here's how revelers around the world will be celebrating on Thursday.

In Spain, grapes are traditionally a staple feature at a proper New Year's Eve celebration. With the grapes, Spaniards play something akin to the classic marshmallow game "chubby bunny," however the grapes number 12 — one for every month of the year. In time to the clock's 12 strokes at midnight, Spaniards try to completely chew and swallow all twelve grapes.

The practice is as much about party sport as it is based in superstition, as it's believed that those who complete the challenge will enjoy twelve months of good luck in the new year.

In Scotland, something called "first footing" happens on New Year's Eve, and it's kind of a big deal. According to Historic UK, the tradition refers to the first person to set foot in the house after the clock strikes midnight, and it's still a tradition across Scotland to this day.

"To ensure good luck for the house the first foot should be a dark male, and he should bring with him symbolic pieces of coal, shortbread, salt, black bun and a wee dram of whisky," Historic UK explains. "The dark male bit is believed to be a throwback to the Viking days, when a big blonde stranger arriving on your door step with a big axe meant big trouble, and probably not a very happy New Year!"

In Romania, the end of the year is accompanied by a processional of bears. Each year, it's tradition for citizens parade through the streets in bear furs, singing and dancing as they do. The event is also based in superstition, as it's thought to keep evil at bay.

New Year's Eve in Denmark is more boisterous than most, as it's tradition to save up old dishes and plates all year in order to hurl them at the doors of friends and loved ones. The shattered shards of glassware left littering a person's front door are believed to representative of how beloved he or she is, depending on how many well-wishers turned out to destroy plates in the name of friendship.

New Year's Eve invites a number of traditions in the Philippines, both food-related and non-edible. All of the traditions are meant to invite good luck and prosperity. Traditionally, among a number of other rituals, Filipinos wear polka-dots and buy round fruits (anything round is believed to be a sign of prosperity), illuminate all the lights to invite a bright new year, clean everything and jump in the air 12 times in the hopes of growing taller.

New Year's Eve in Ecuador is literally on fire. Each year, Ecuadorians make life-sized or miniature models of public figures, celebrities or fictional characters that are believed to be "sinners" and at midnight, the objects are set on fire. This is meant to banish the evil of the previous year and clear the air for the new year.

Despite the variance in traditions, cultures and behaviors around the world, there seems to be one thing that's universal: fireworks and a kiss at the stroke of midnight.