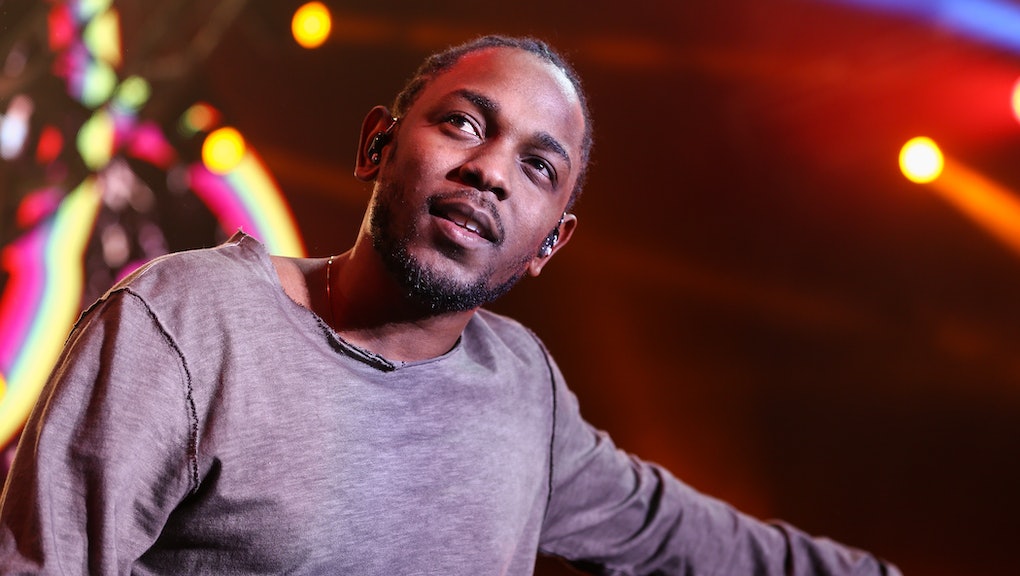 Kendrick Lamar became a leader in 2015. He won Grammys, earned accolades from his city and his standout album To Pimp a Butterfly topped nearly every end-of-year list. However, at the year's outset, it didn't appear things were going to pan out so smoothly. His first song of the year, "The Blacker the Berry," raised a storm of controversy, much of it centered around a single line: "So why did I weep when Trayvon Martin was in the street, when gang-banging make me kill a nigga blacker than me? Hypocrite!"

Fans called him out for seemingly justifying police-motivated brutality by positioning it as an understandable reaction to the supposed epidemic of black-on-black crime. It followed comments from a January Billboard interview that rang with the same glimmers of respectability politics. Just as the year is coming to an end, Lamar has finally spoken to those lines in an NPR interview published Tuesday. He claimed those lines were not intended to pass judgment on the black community, but were instead intended as a commentary on his own life.

"It's not me pointing at my community; it's me pointing at myself," Lamar says. "I don't talk about these things if I haven't lived them, and I've hurt people in my life. It's something I still have to think about when I sleep at night. The message I'm sending to myself — I can't change the world until I change myself first."

Lamar shared a story about Chad Keaton, a younger kid from his community he had promised to help steer onto the right path, who got shot while in the wrong place at the wrong time.

"For instance, when Chad was killed, I can't disregard the emotion of me relapsing and feeling the same anger that I felt when I was 16, 17 — when I wanted the next family to hurt, because you made my family hurt," he told NPR. "Them emotions were still running in me, thinking about him being slain like that. Whether I'm a rap star or not, if I still feel like that, then I'm part of the problem rather than the solution."

The comments put "The Blacker the Berry" and the quotes Billboard published in January into a new context. They're a glimpse at Lamar's process of becoming a leader, pushing forward hip-hop's potential to be a political force.

Few other albums stimulated as much political debate as Kendrick Lamar's To Pimp a Butterfly. His song "Alright" became an unofficial protest anthem for the Black Lives Matter movement, heard during protests in Chicago, Cleveland and Minneapolis. His performances of the song provoked conversations on Fox News over the impact hip-hop has been having on the black community, during which Geraldo Rivera claimed that "hip-hop has done more damage to young African-Americans than racism in recent years."

These challenges Lamar has put to himself in finding new ways to approach the violence taking place in America's streets have helped him create music that moves beyond conversations about beats and bars into art with real political consequence. It's worked against him in some ways. A November Complex piece suggested that the "importance" of Lamar's political rhetoric has clouded critics' ability to realize that his music is just not all that enjoyable. This is the music Lamar feels he needs to be making, because few others are.

"I think that the depth is needed," he told NPR. "And there's a lot of other artists doing things outside of that depth that I enjoy — that music that I can actually have fun to, and not be in depth and think about, then I appreciate that. But as long as I'm doing it right now, I'ma continue to say just a little bit more that pertains to what's going on."