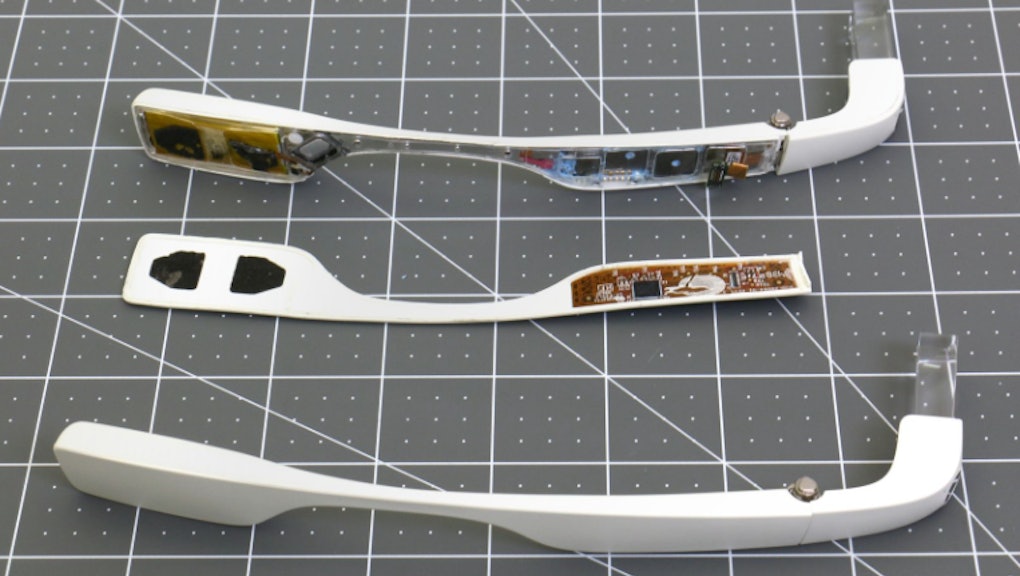 New Google Glass 2.0 Design Features and Photos Are Here — This Is What We Know

On Monday, blueprints and a user manual for Google Glass' reincarnation, called model GG1, filed with the Federal Communications Commission were made public, CNET reported.

For those who may have forgot, Google Glass is the less-than-successful wearable device that went live in 2013 and was developed by Google X lab, which is the secretive lab behind driverless cars, the Los Angeles Times reported in January. Google suspended the sale of the $1,500 smart eyewear on Jan. 19 with a promise to keep on innovating on the product with its own team, according to a Jan. 15 statement.

"Glass was in its infancy, and you took those very first steps and taught us how to walk," the statement said. "Well, we still have some work to do, but now we're ready to put on our big kid shoes and learn how to run."

The upgraded version is as futuristic as expected, with a larger screen, foldable arms and a small light, according to the filing images. Rumor has it that it'll be waterproof (like the iPhone 7, perhaps) and have faster processing, the Guardian reported.

Nest founder Tony Fadell, who also played a part in the creation of the iPod and iPhone, took the reigns for the new Google Glass program, USA Today reported.

The newly designed device is at first an enterprise product not for consumers but for businesses such as healthcare and manufacturing, the Guardian reported. Google has already allegedly — and secretly — sent out the new version to be tested by certain businesses, the Wall Street Journal reported in July.

Google is also on the lookout for top-notch developers to write Glass for Work software apps, according to Business Insider.

The first Google Glass, which Google claims was an early prototype, earned some serious tough love by consumers and reviewers, Business Insider reported in February. Many people were afraid of online security breaches with the glasses, such as having personal information stolen or being recorded without permission, Business Insider reported in 2014.