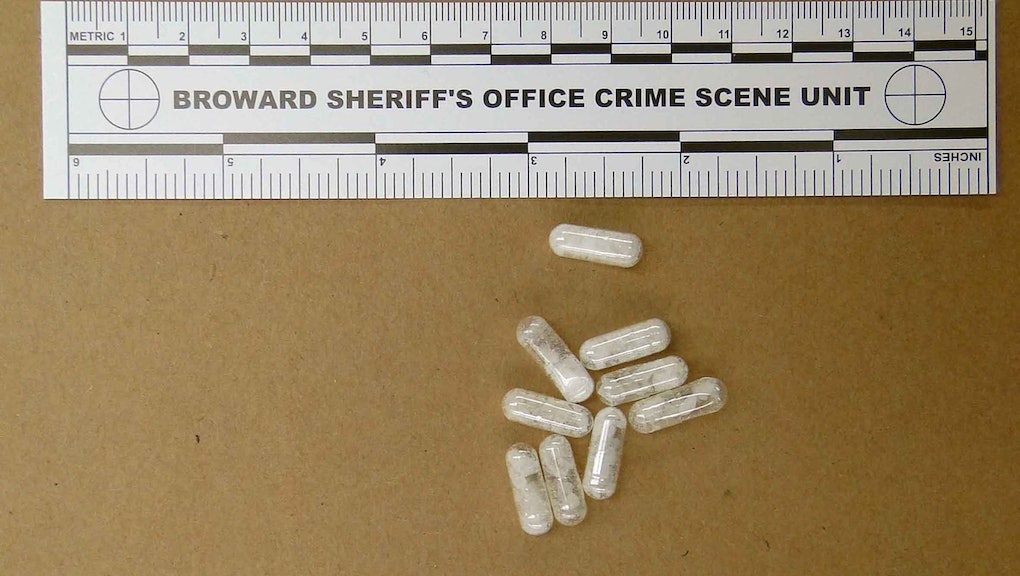 What Is Flakka? Here's What the Designer Drug Is Made of and Its Effects

On Monday, a man named Travis Gordon was arrested for allegedly stabbing two men in Gifford, Florida, WPBF reported. The stabbing occurred last week, and Gordon is suspected to have been high on flakka, also called gravel — a dangerous designer drug that's cropped up in parts of the United States. This case is the latest in an epidemic of crimes, incidents and even deaths seemingly related to flakka.

"I would say of all the drugs I've seen — cocaine, amphetamines, heroin, Oxycontin — this is the absolute worst," ER doctor Dr. Nail El Sanadi told NBC earlier this month. Flakka usage is on the steady rise, especially with the poor, NBC reported. There were no reported flakka cases in 2010, but 670 in 2014, according to the U.S. Drug Enforcement Administration, Forbes reported. It's illegal, dirt cheap—as low as $5 a dose—and easy to find and do.

Flakka is increasingly sending users to rehab and the emergency room, the Miami Herald reported.

What is it? Dubbed the "Devil's Drug," flakka's full name is alpha-pyrrolidinopentiophenone, and is a cathinone, which is similar to bath salts, the National Institute on Drug Abuse reported in April. It can be eaten, snorted, injected and vaped, and incites what the NIDA called "excited delirium," which makes users feel off-the-charts paranoia or stimulation and lead to erratic violence and obsessive addiction. In other words, users might suffer from a loss of reality and scary-high body temperatures and pressure, Forbes reported.

Scientifically, it clings onto neurons and floods the brain with dopamine and sorting, like meth does, CNN reported. But flakka lingers in the brain longer than cocaine does, and a slight difference in dosing can make a huge difference in the high.

"I remember having seizures and having just continued paranoia and feeling like people were chasing me and following me and talking about me," one former user told NBC about her experience.

In 2014, the U.S. DEA labeled flakka a Schedule 1 drug, which means there's no currently accepted use of it in the U.S., Forbes reported.

Florida, along with Texas and Ohio, are its hotspots, Forbes reported. It's also making its way to New York's Bronx and East Harlem neighborhoods, PIX11 reported.

China, Pakistan and India are the main suppliers of flakka, Forbes reported. Almost anyone can purchase a kilogram of the drug online for about $2000, and bring in up to $50,000 in profit, NBC reported.

In the media: Flakka's popularity has been validated and accumulating in the media. In August, MTV's reality show True Life opened casting calls for flakka addicts, Forbes reported. The ad said, "Have you tried flakka and now can't stop? Is your addiction getting in the way of your every day life?"

The first flakka-related fatality occurred in January, when Rhonda Sanchez overdosed with flakka and other drugs in her system in Deerfield Beach, Florida, according to the Sun-Sentinel. In March, a man high on flakka tried to scale a fence and impaled himself in Fort Lauderdale, Florida, CBS reported. The belief of having superhuman strength is a side effect of flakka, NBC reported. This month, a man who also took flakka attempted to break into the police department at Vero Beach, Florida, and spit on the deputy according to NBC. The cases go on.

Flakka and other synthetic drugs were banned in China, after a visit by South Florida law officials in November, the Miami Herald reported.