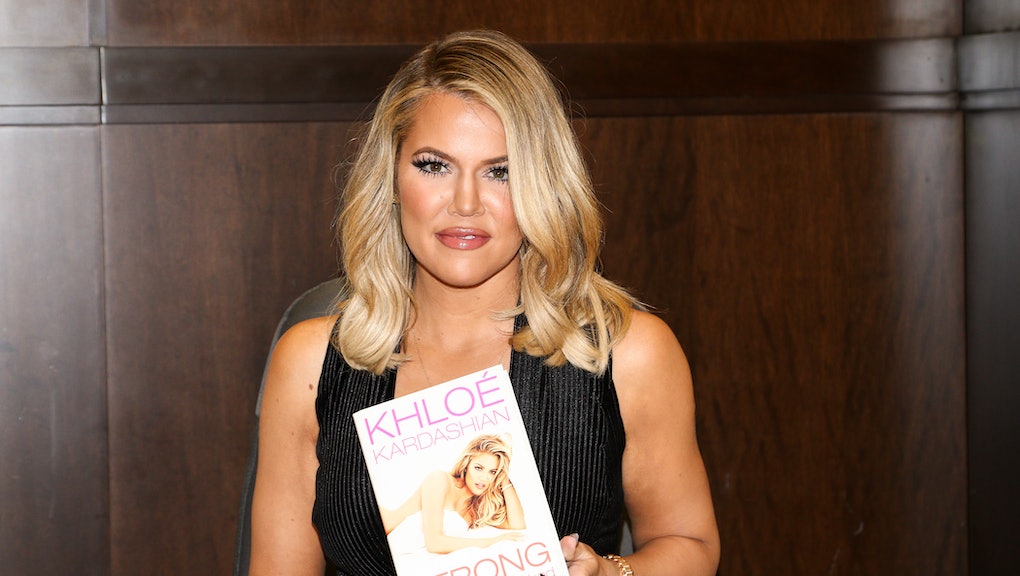 No, Khloe Kardashian, the Best Revenge Body Is One That Doesn't Give a Fuck

On Dec. 17, E! announced in a press release that Khloe Kardashian would be starring in an upcoming weight loss reality TV show. The show, Revenge Body With Khloe Kardashian, follows people who've recently been through a significant life crisis, such as splitting up with a significant other or losing a job, as they undergo rigorous diet, exercise and makeover regimens encouraged by none other than Kardashian herself.

"Looking great is always the best revenge," Kardashian said in a statement, shared by Deadline. "It's so exciting to be able to mentor these people through their full-body makeovers, and I can't wait to see the incredible results at their final reveals!"

Kardashian's role as host of the show is appropriate, considering she's been pushing the concept of the "revenge body" this year since displaying her newly taut physique on the cover of Women's Health. In an interview with the magazine, Khloe said she started getting in shape around 2012, when she was nearing the end of her marriage to NBA star Lamar Odom.

"The first 45 days you're like, [forget] this [expletive]," Kardashian told Women's Health. "You're exhausted, you're sore, and I actually felt fatter because I was swollen. If you keep going, you're eventually like, 'Wow, is that an indentation on my arm?' Yeah, it's a revenge body. But it's just as much for all my critics who called me 'the fat one' for my entire existence."

In the interview, and on various fitness blogs and websites like My Revenge Body, the concept of getting into shape after breaking up with a boyfriend (because it's always a woman breaking up with a man, not the other way around) is framed as a positive, empowering process. In Kardashian's case, her revenge body process was more than a retaliation against Odom; it was a self-induced metamorphosis, a way to forcibly mold herself like Play-Doh from the funny, "fat" sister into the mesh bralette-wearing, Vaseline-thighed sister.

While Kardashian might have found the transformation empowering, more often than not, "revenge body" is a term used by the media to describe famous women who have emerged from very public, very humiliating breakups.

The term (or variations thereof, such as celebrity trainer Valerie Orsoni's "vendetta technique") has been used to assess pretty much every famous woman who's gone through a publicized split, including Kaley Cuoco, after her breakup from musician ex Ryan Sweeting; Perrie Edwards, after she ended her relationship with One Direction's Zayn Malik and posted a saucy bikini photo on Instagram; and Katie Holmes, after she split up with Tom Cruise in 2012.

According to this media narrative, the revenge body is the ultimate course of action a woman can take to reclaim her identity after a breakup or hit back at a man who done her wrong — a large-scale military offensive on the battlefield of love. To borrow 18th-century military historical terms, if Khloe Kardashian were Napoleon and Lamar Odom were Russia, then the revenge body would be a giant cannon at the Battle of Austerlitz.

The "revenge body" term is largely intended as a form of praise, a way for the media to reassure female celebrities that even though they've just endured humiliation and heartbreak, they still have something going for them: They still look totally fuckable. And for what it's worth, there's something to be said for taking control of your eating and fitness habits, and using extreme personal turmoil as motivation to make major lifestyle changes.

But using the "revenge body" as a plaudit — i.e., patting women on the back for losing weight after a breakup — assumes that all those CrossFit sessions and kale smoothies and personal trainer bills were aimed toward one single, all-consuming goal: proving something to a man.

No matter that women like Edwards and Cuoco and Holmes look pretty much exactly as svelte and toned as they did prior to the breakups, or that those Amaro-filtered bikini selfies on Instagram don't indicate they're so traumatized by their breakups in the first place. No matter that the "breakup diet," a term used to describe the lack of appetite and subsequent weight loss some experience after a breakup, is anything but healthy, according to doctors.

None of that matters, because what really matters is this: The revenge body is a product of a culture that assumes that there are only two things that can make a woman happy: 1. being thin, and 2. having a man. And when she loses one of these things, she has to fight like hell to retain the other, because on any battlefield, a woman's body is her only weapon.

That said, if you've just gone through a breakup and you really, really want to take revenge against an ex, the best form of retaliation isn't to start going to barre class or subsisting on popcorn and hot water so you can lose a few pounds before you have to see him at your college roommate's wedding. The best form of revenge against an ex is simply to stop giving a fuck entirely.

Eat what you want, when you want to, and do the exercises you want, when you want to — because as Allison P. Davis of the Cut put it, "Honestly, wouldn't the best revenge bod be the one that demonstrates 'I don't give a fuck if you're actively looking at my life'?" If you can show your ex that you're doing just fine without them, no matter what size you are, there is no wound that cuts deeper, no weapon that slashes harder and no revenge that's sweeter than that.