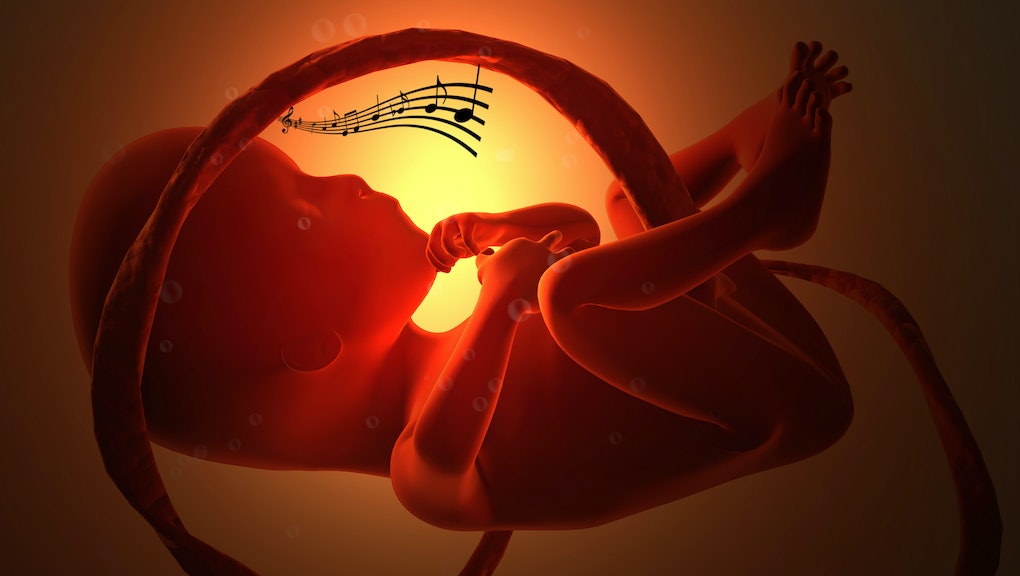 Serenade Your Baby From Within the Womb via This Musical Tampon

Pregnant women who want to expose their unborn babies to the beauty of music can now do so with tampon-shaped portable speakers made to be inserted in vaginas.

The item is called a Babypod, and a number of the devices were recently provided to expecting moms who attended a show in Spain, during which singer Soraya performed a variety of Christmas carols for all of their li'l babies who followed along from the comfort of the womb.

It was the first-ever "concert for fetuses."

According to a video from gynecology clinic Institut Marquès in Barcelona, the concert was inspired by a recent Spanish study which suggested that babies in the womb are capable of responding to music at as early as 16 weeks.

"In line with studies that suggest that music might have beneficial effects [such as better learning skils and memory] on the fetus, such stimulation could be used as a method for fostering fetal well-being, with the guarantee that the fetus hears it," the lead authors wrote in the British journal Ultrasound back in September. "It could also be used to evoke arousal responses of the fetus, and stimulate movements to facilitate and shorten obstetric ultrasound examinations."

But why does the music have to be transmitted via a Babypod, rather than, say, singing directly at the woman's baby bump, a la Ross in season one of Friends?

Babypod claims that, much like an expensive pair of headphones, the vagina offers superior sound quality.

"The vagina is a closed space, so sound is not dispersed in the environment," the company's website says. "In addition, there are less soft tissue layers separating the baby from the sound target, only the vaginal and uterine walls. By placing a speaker inside the vagina, we overcome the barrier formed by the abdominal wall and the baby can hear sounds with almost as much intensity and clarity as when emitted."

Vagina iPod aside, the question still remains: is playing music for your babies really beneficial to their development? The answer seems to be subject to different medical opinions. While some studies have claimed that listening to music during pregnancy can result in some benefits for the baby, such as the ability to get a head-start on learning and memory skills, some experts have warned that moms shouldn't read too much into such claims.

"Just because fetuses can learn doesn't mean you need to teach them things," Johns Hopkins developmental psychologist Janet DiPietro told the Washington Post in 2013. "The intrauterine environment has plenty of stimulation."

Meanwhile, a representative from the American College of Obstetricians and Gynecologists told Mic in an email that to truly know whether or not exposing fetuses to music via Babypods or any other method was beneficial, there would have to be more long-term research done after the babies are born.

"The best I can do is say that there is no specific ob-gyn perspective regarding music during the prenatal period," they said, "and certainly not regarding whether any specific technology is better than any other."

Either way, though, the moms in attendance at the fetus concert seem to have enjoyed themselves. Soraya herself described it as a "very special" show.

"One day I would like to have a baby too," she said. "So it's a great opportunity just to see what is happening with the therapy of music."