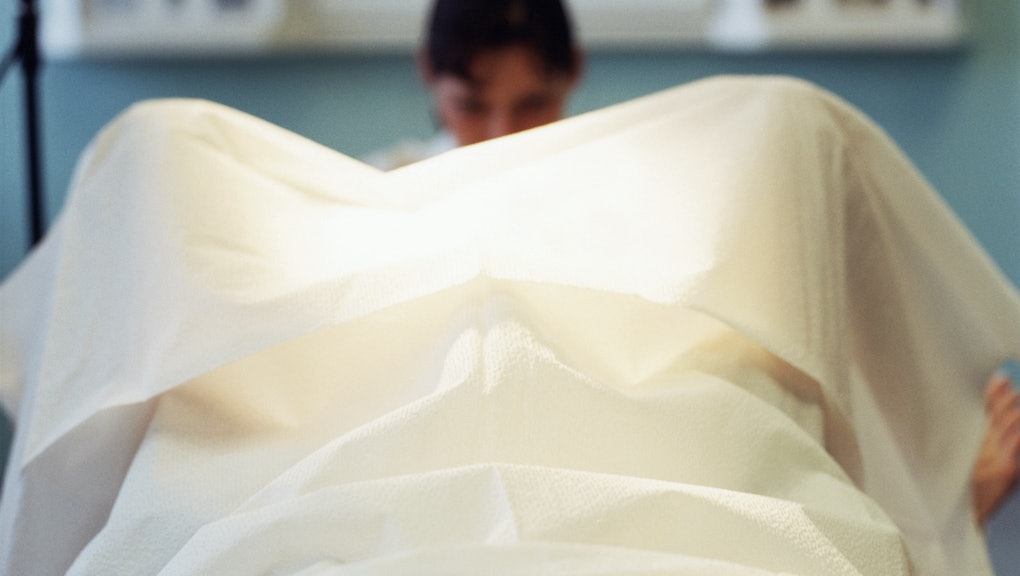 This Is What It's Liked To Be Shamed For Having Vaginismus

Kari*, 24, was 20 when she tried having vaginal intercourse for the first time. Almost immediately, she said, she realized something was wrong. When she and  her boyfriend attempted to have sex, it was not just painful, but impossible. "It felt like he was hitting a wall," she told Mic. So she went to the gynecologist.

"After I was done explaining my problem and symptoms in detail, she told me that I was probably just not ready for sex and that my body was sort of shutting down the ability to be penetrated," Kari told Mic. "She also asked if my religion was against premarital sex and suggested that I was feeling guilty about wanting to have premarital sex and so my body was preventing it from happening."

After the doctor painfully forced a finger inside Kari for the exam, she handed her a printout and suggested this may be the cause of her discomfort. Kari left the doctor's office in tears.

Kari was ultimately diagnosed with vaginismus, a condition that causes severe pain during intercourse. For both women with the condition and their romantic partners, living with vaginismus can be both physically and emotionally painful: in extreme cases, penetrative sex can be out of the question; as a result, relationships can become strained.

Yet what is perhaps even more difficult for women with vaginismus to deal with is the fact that many doctors simply don't believe they have the condition at all. When interviewing women with vaginismus and their partners, this was a recurring, unexpected pattern: Many of the women Mic interviewed said they had received insensitive, even offensive responses from medical professionals.

Patrick*, 35, said that when his girlfriend of 10 years first sought treatment for her vaginismus, the experience was less than heartening.

"Although he was a medical doctor that had been a practicing OB/GYN for years, he acted as if he had never heard of vaginismus, dismissed her concerns and said 'It won't be so tight after you have kids,' Patrick told Mic. "Everything you read online indicates that this has absolutely nothing to do with it, and it is instead involuntary muscle contractions of the PC muscle. It can happen to a mother of three as easily as to a virgin."

The doctor's unfortunate response to Patrick's girlfriend was likely because there's just not that much known about the condition. While some have speculated that the condition might be caused by emotional trauma, such as a past history of sexual assault, others have identified physical causes, such as yeast infections or complications from childbirth.

"The thing with vaginismus is that...there's still a lot about it that we really don't know. And [the causes] can be pretty complex," sex therapist Vanessa Marin told Mic.  "It's not researched nearly enough."

Unfortunately, such dismissive comments aren't the only unhelpful responses vaginismus sufferers have recieved from medical providers. Marla*, 29, for instance, first experienced vaginismus symptoms when she was about 14 and had just started her period.

"I suppose it was when I first tried to use a tampon. All I remember is that I couldn't find a hole; I just thought it was because I didn't know what I was doing, and I remember thinking it will probably be easier when I start having sex," Marla told Mic.

She was wrong. "When I tried having sex with my first boyfriend, when I was 16, it was like he hit a wall and had nowhere to go. We were both inexperienced, but I knew it shouldn't be so hard to figure it out," said Marla.

Eventually, a few years later, she asked her general practitioner about it. "She was no help at all. I told her that sex was very painful and I didn't think I would be able to have a pap smear. She told me that sex was supposed to feel nice, and that I should try to relax. That was it. That was all there was to it. That really put me off," Marla said. She never spoke to a medical professional about her condition again.

Beyond feeling dismissed, other women reported receiving a healthy dose of slut-shaming when they try to seek medical help for the vaginismus. When Kari's doctor suggested that she simply wasn't ready to have sex, she was in a healthy and secure relationship at the time."I'd been with my boyfriend for a year at that point and was really, really sure I wanted to have sex with him," she told Mic. She was furious that her doctor had suggested that the reason she was in pain was because she shouldn't have been having sex with him in the first place.

Marin explained that deficiencies in sex education, even medical sex education, can lead doctors to react uncomfortably to conditions like vaginismus. Because doctors only get a few hours of training in human sexuality, they often aren't able to adequately address many patients' sexual health concerns. In fact, according to a 2013 study, both medical students and practicing physicians reported "being underprepared to adequately address their patients' sexual health needs."

"Doctors are humans too, so they have their own hang-ups about sex," Marin told Mic. "I've had so many clients tell me their doctor seemed uncomfortable talking about sex, or gave them unhelpful advice like 'Just have a glass of wine.'"

The "just have a glass of wine" advice is frequently reported on web forums and in support groups for women with vaginismus. But according to sex therapist Dr. Madeleine Castellanos, author of Wanting to Want: What Kills Your Sex Life and How to Keep It Alive, alcohol in general is a poor choice to help with sex.

"[Alcohol] doesn't address the underlying anxiety. Instead, it just tries to ignore the anxiety or squash it, which doesn't help.  Next, that person starts to rely on alcohol like a crutch to get 'into the mood' which will decrease their ability to get into the mood without it," Castellanos said.

Drinking alcohol as a way of self-medicating during sex can also cause what Castellanos calls "rebound anxiety."  "That means that after the effects wear off, you are more anxious than before. This starts a cycle of depending on it for social interactions and for sex," Castellanos told Mic.

In the subreddit /r/vaginismus, multiple women reported hurting themselves by taking the alcohol advice and pushing through the pain. "We saw a dozen different doctors, some who had no idea vaginismus was a thing, and others who offered suggestions that just didn't help ('Just have a glass of wine/smoke some weed before sex' or 'Here, take this antidepressant that might help your vagina'), and two who actually suggested that I have a baby to 'stretch everything out down there,' wrote one member on a throwaway account.

Online support groups have proven to be a major part of some women's healing process with vaginismus, especially after these women have been made by their doctors to feel like their illnesses are invalid.

"I've never received helpful advice from a doctor. However, I did wind up Googling 'vaginismus' and found vaginismus.com and /r/vaginismus. Both sites are amazing and full of really supportive people," Kari told Mic.

Kari has had success treating her vaginismus with a dilator set, a series of vaginal inserts that gradually increase in size to help vaginal muscles stretch out and adjust to penetration.

"I read [the book] Completely Overcome Vaginismus, and I basically followed it word for word. I started with practicing inserting a Q-Tip and then moved on to the graduated dilator set. There were a lot of 'one step forward, two steps back' situations, but I gradually gained the ability to insert the dilators inside my vagina without any muscle spasms. Happy to report that I can successfully have pain-free PIV sex now," Kari told Mic.

"You become so used to [sex] ending in disappointment."

Not all doctors are in the dark about vaginismus. There are many sensitive and well-educated specialists that have helped improve many women's lives.

"I now have a really great team of a [general practitioner], sexologist and pelvic floor physical therapist working with me," said Marla. "My sexologist frequently tells me that sex isn't just PIV sex, and that while I'm working through my treatment, my fiancé and I should take penetration off the table and focus on pleasure as an aim rather than orgasm. It's so easy with vaginismus to neglect your sex life because you become so used to it ending in disappointment, so this advice is always a great reminder for my fiancé and I to remain intimate while we can't have penetrative sex."

This sentiment — that removing penetrative sex from the equation can actually lead to a greater appreciation of physical intimacy —was echoed by many of the partners who shared advice on dating with vaginismus. From romantic partners, to women themselves, to medical professions in the know – there was one resounding takeaway: We need to talk about it.

"It's extremely important that we start talking about sexual pain more openly, and give medical professionals more training," said Marin.