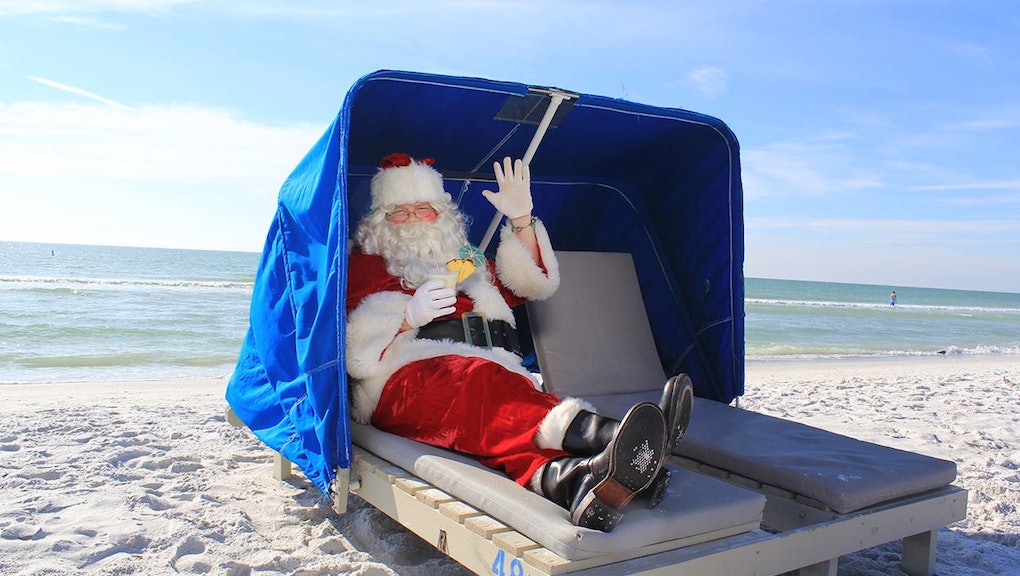 The North Pole, a region that has not seen sunlight since mid-September, will likely see temperatures rise Wednesday to 35 degrees Fahrenheit.

If Earth's northernmost point does rise above freezing, it would be roughly 50 degrees higher than the average, marking the second time in recorded history that the world's most northerly region has done so, the Atlantic reported.

The sudden heat wave is the result of a peculiar storm system that has produced a bizarre assortment of tornadoes and flooding across the southeast United States. The storm has now moved beyond the United States and is currently over Iceland. In addition to already beginning to bludgeon the United Kingdom, "Storm Frank," as the weather system is known, is sucking air from warmer regions closer to the equator and essentially spitting them out over the Arctic.

The unseasonably warm weather comes as many in the United States witnessed record-breaking holiday temperatures. In New York City, residents enjoyed a 72-degree Christmas Eve. The historical average for the day is 40.

Much of the weird weather in the United States and elsewhere is attributable to a phenomenon known as El Niño, which causes Pacific Equatorial water and air temperatures to rise dramatically, bringing warmer weather to much of the continental United States as a result.

El Niño is not, however, enough to explain a number of other disconcerting weather patterns that have taken place over the 21st century. Not only was 2015, the hottest year ever recorded, but the next 13 out of 14 runners up have all come in the last 15 years.

"We're living through history, and not of a good kind," climate activist Bill McKibben told the New York Times. "2015 didn't just break the global temperature record — it crushed it. Think of the energy needed to raise the temperature of something as large as our planet by this much this fast."

Leaders from around the world struck a historic accord in Paris earlier this month in an attempt to curb the effects of global climate change. If left unaddressed, says a broad spectrum of scientists including NASA, the consequences could be dire.

While it is impossible to attribute any specific event to climate change, historic drought in California and bigger, nastier hurricanes around the country are both thought to be effects.