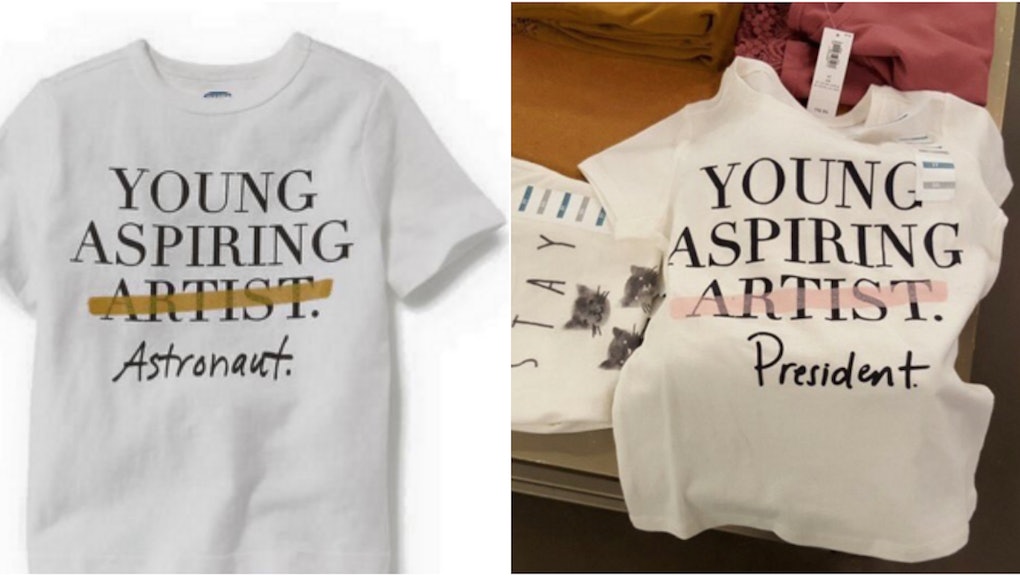 Clothing companies, beware: If you're thinking of putting any text on a kid's T-shirt, you're likely going to screw up. Or at the very least, face the ire of the internet.

That's the situation Old Navy finds itself in after Twitter users discovered a children's T-shirt displaying the slogan "Young Aspiring Artist" with the word "Artist" is crossed out — and replaced with the words "Astronaut" or "President."

"No need to bash artists and young creatives" was the general sentiment among the Twitter users who took issue with the shirts, that appear to have that signature navy Old Navy label.

In the meantime, Twitter users weren't too happy with the shirts, which ironically were likely meant to convey an empowering message to girls, and help them envision themselves in fields typically thought of as only for men.

Of course, that message got lost by dissing another professional field that people feel strongly about (and that Old Navy, you know, works with).

This obviously isn't the first time a company's faced backlash over the messaging on its T-shirts for kids — and the backlash is often caused by shirts for girls that appear to perpetuate sexist ideas. In 2013, the Children's Place came under scrutiny for selling shirts with slogans like "Born to Wear Diamonds," and another that checked off "My Best Subjects" as "shopping, music, dancing," but not math since "nobody's perfect."

Earlier this year, Target came under similar scrutiny for a woman's shirt with the word "Trophy," on the chest, which critics said played directly into sexist stereotypes.

The "Young Aspiring Artist," shirt from Old Navy was likely trying to avoid the sexist hot water that other companies have faced, but it forgot one thing: Don't piss off the artist inside each of us.

Dec. 30, 2015, 2:25 p.m.: A company representative confirmed via email to Mic that the shirts are, indeed, Old Navy shirts. In response to the criticism, the shirt design will be discontinued and removed from stores.

"We would never intentionally offend anyone, and we are sorry if that has been the case," Debbie Felix, an Old Navy spokesperson told Mic via email. "Our toddler tees come in a variety of designs including tees that feature ballerinas, unicorns, trucks and dinosaurs and include phrases like, "Free Spirit." They are meant to appeal to a wide range of aspirations."