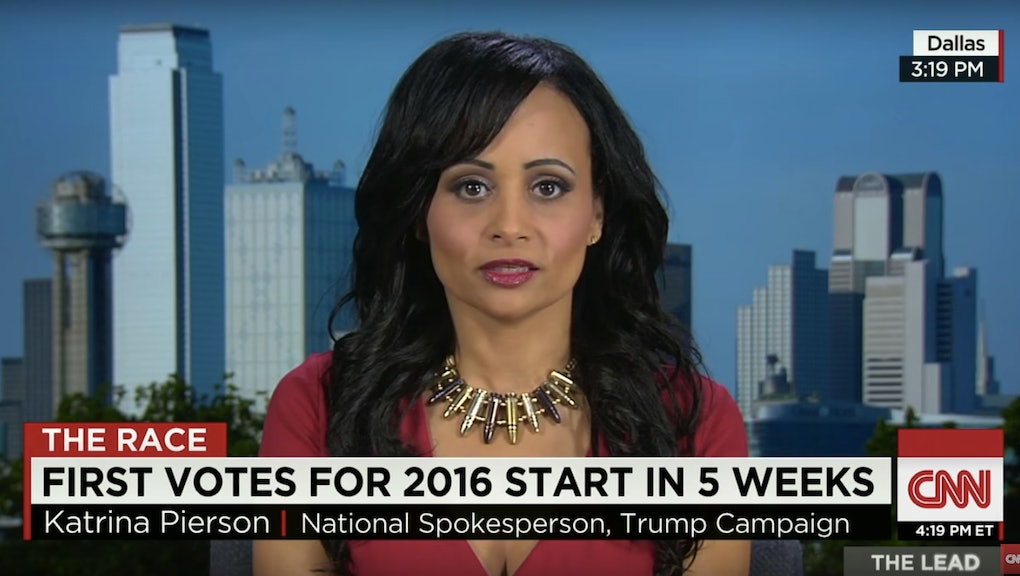 On Tuesday afternoon, Donald Trump spokesperson Katrina Pierson appeared on CNN's The Lead to talk about her candidate's history with women and his recent criticism of former president Bill Clinton.

But while Pierson talked politics, viewers set their eyes on her necklace, which some viewers found troubling.

Although the necklace was a pretty clear political statement, the host of the Lead that day, Jim Sciutto, failed to ask Pierson about the necklace during the segment. But as social media caught wind of the disturbing accessory, he decided to ask her a follow-up question on Twitter.

"We noticed your bullet necklace on our air," Sciutto tweeted. "Is there a message behind it?"

Her response was exactly what you thought it would be.

"Made in #Texas!" she tweeted. "Real ammo. #2A Support your local small business owners!"

"Maybe I'll wear a fetus next time & bring awareness to 50 million aborted people that will never ger [sic] to be on Twitter," she rebutted.

She made sure to add that she wasn't being literal, but she was trying to make a point:

This isn't the first time Pierson has found herself in a buzzed-about fashion moment on a political show. In November, Pierson happened to be on a Fox News segment with Republican Muslim Coalition founder Saba Ahmed, who appeared on TV wearing an American flag hijab that angered viewers across the country.

While that sartorial moment was done in the name of defending religion (as Ahmed told Mic, "The reason I did it is that I wanted to portray that there are patriotic American Muslims and we just want to live in peace"), Pierson's most recent fashion statement seemed to send a few other messages, about the Second Amendment.

But she probably also just liked the style, given her interest in fashion: Politico reported that Pierson has "plans in the works to launch her own shoe and clothing lines." Perhaps the designs will include bullet accents?