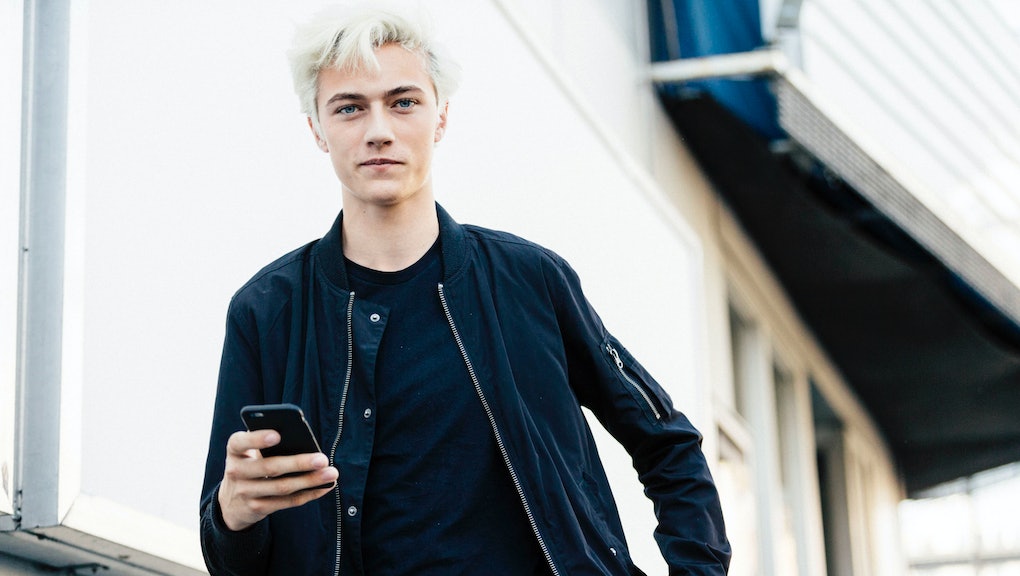 Lucky Blue Smith sounds like a denim brand, or maybe a kind of old-school whiskey.

But make no mistake: Lucky Blue Smith is a real person, and you're about to hear more about him.

The 17-year-old model's latest achievement is a costarring role in a cover shoot with none other than Kylie Jenner. The pair are the stars of Elle U.K.'s February 2016 issue, with a cover line that reads, "Internet Superpowers Kylie Jenner and model Lucky Blue Smith want to conquer your world."

But to be fair, they already are — including Smith. This week, he came in second only after Kanye West in GQ's Most Stylish Man Showdown 2015. Yes, a 17-year-old Mormon kid from Utah almost beat Yeezy, along with 62 other guys including Jared Leto, Drake, Daniel Craig and Eddie Redmayne.

Smith has been on the modeling scene for at least five years, having come from a long line of models — New York magazine reported that his mother and both grandmothers were professional models, making his family "third-generation professional pretty people."

But it's not just his genes that propelled Lucky Blue Smith (it would be a shame not to use his full name, no?) from Utah to fashion stardom this year. It was the internet — specifically Instagram. Here's how it happened:

"The exact moment Smith's career turned from model to Insta-star was during the menswear shows last January in Milan," Derek Blasberg wrote in Vanity Fair. That month, Smith walked the runways for the likes of Philipp Plein, Bottega Veneta, Salvatore Ferragamo, Roberto Cavalli, Etro and Fendi. He also made time in Milan to meet with some fans, who ended up coming out in droves. According to Blasberg:

He posted a message that he'd be outside Via Solari, 35, Fendi's show venue in Milan, at a certain time. Sixty girls arrived demanding selfies. He pulled the stunt three more times. Again, more girls, more selfies. His followers were multiplying.

Smith did the same in Paris.

February: Teens decide he's basically their hunk of the moment.

After his whirlwind trips to Fashion Week in Europe, Smith was declared the "male model of the moment" by Teen Vogue, a magazine with readership that matches Smith's biggest fans: plugged-in teen girls. He had over half a million Instagram followers at that point, an important point on his resume. "I think models' social followings are starting to matter more — a lot more than I think they should," he told the magazine.

March: Smith lands a fashion cover (even if it is with elastic pants and a bolo tie).

Smith scores the cover of Jalouse, a French fashion magazine, alongside Hailey Baldwin, daughter of Stephen Baldwin, and part of the cool kid crew that includes Justin Bieber and Kylie Jenner. Smith is moving up in the world.

In April, Smith finds himself on Ellen DeGeneres' couch, making his first-ever talk show appearance. DeGeneres asks him about his two signature "looks," which he calls the "Are you looking at me" and the "Why are you looking at me?" But basically, they're both just dressed-up versions of Blue Steel (and that's not a bad thing).

May: Apparently, Smith's going to be in a movie?

Teaser photos and eventually a trailer start popping up for Love Everlasting, meaning Smith is already ahead of the curve in his model evolution: He's already making his first jump to the big screen, where he will either find his real calling à la Channing Tatum, or find that he's really better in magazines after all, à la Kate Upton.

Smith walked the runway for Versace back in Milan, so it's only appropriate that eventually he'd cross actual paths with Donatella Versace herself. Smith Instagrammed a photo with the designer in June, thanking her for "putting me in your show."

July: Smith gets the call from Tom Ford.

Smith is called up to the majors and is asked to star in an ad for Tom Ford with model Ondria Hardin. He looks shiny and impressive against the desert backdrop, but really, his biggest selling point by summer is his following — as Fashionista noted, it's up to 1.2 million Instagram followers.

August: Smith gets the nod from national magazines.

Smith lands a big ol' feature in New York magazine's biannual fashion issue, in an article titled "Little Fresh Meat." It's apparently his nickname in China, where he has about 350,000 followers on Weibo, notes the magazine.

September: As the "chillest teen," he apparently hasn't let Insta-fame go to his head.

Smith takes a spin on the red carpet in September at a Moncler event in New York (he co-starred in the outerwear company's ads this year) and impresses the Cut with his total chillness.

"Yeah, I message people all the time," he said, speaking of his rabid social media following. "Like, usually they just say, 'You're really cute,' and I'll just be like, 'Oh, thanks. You too.'" Like, sweet.

October: Smith and his sisters are officially partying with Hollywood elite.

Smith hits the red carpet at the amfAR's Inspiration Gala in Los Angeles, as well as popping up with his sisters — Daisy Clementine, Pyper America and Starlie Cheyenne, who together form the band the Atomics — at a party in Beverly Hills for Teen Vogue's Young Hollywood issue. Smith has finally ascended to Hollywood levels, hanging with L.A. stars and walking on the red carpets.

November: Smith is finally noticed by the old-school behemoths.

After all, when a model has more than 1 million followers, getting him to wear a certain brand in a Insta photo is far more powerful than him wearing it on a runway — that's why Kendall Jenner can earn up $300,000 for a single post on social media.

December: Smith lands a major cover with a Jenner — he's not just an "internet favorite" anymore.

With 1.8 million Instagram followers and counting, Smith is coming for 2016.