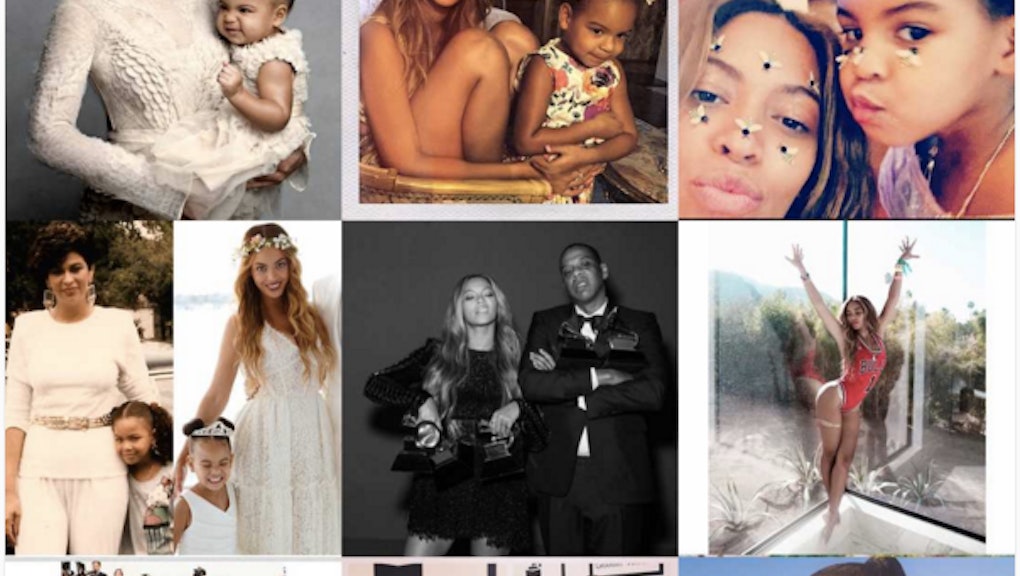 The best nine Instagram collage grabbed the internet's attention this week, so we thought a roundup of Beyoncé's 2015's snaps was more than appropriate and definitely in line with the current end-of-year mood. Who better to give us a look back at the year's photographic highlights than Queen Bey? She is, after all, an Instagram master: As of Wednesday, 55.2 million people follow Beyoncé on the social media app, while she follows no one. Because of her being pop royalty and all.

According to 2015BestNine, Beyoncé's best 'grams of the year are those collaged below (the website simply pulls the photos with the most likes on them):

They're all solid, yes, but "best" is in the eye of the beholder. We thought the following nine shots were Beyoncé's greatest, sometimes unsung Instagram hits of 2015. Every effort was made to exclude videos, which — because she can dance and sing in them — seem unfairly advantaged.

Herewith, Beyoncé's nine best Instagrams of 2015 (by no particular algorithm but our own):

As a rule, Beyoncé's vacation photos are better than all of ours. Spectacular vistas abound on her Instagram feed, as do crumbling ruins and luxurious yacht rides and adventuresome antics. Snoozefest. They're still typical vacation photos at heart, which is why this one — of Beyoncé buried in the sand — stands out as an Instaclassic. More interesting, right?

Look at Beyoncé and Jay-Z with all their Grammy Awards, goofing around, being winners. Look how much fun they're having as they gloat! Good stuff.

This one also features in her best nine grid, but it's pretty cute, so we'll give it a nod. Daughter Blue Ivy and Queen Bey covered in queen bees? Too much.

Yeah, well, OK, it's a video. But it's a really good one. Of Beyoncé and Blue Ivy flossing. Because they're just like us. Wow.

Suspended in midair, as if by magic. How does she do it?

Here is Beyoncé with a chicken, which looks calmer than most any other chicken has looked when caged by human hands. Bey = mesmerizing.

Great teamwork on this family Halloween costume, Carters. They're doing Coming to America, and they're on point.