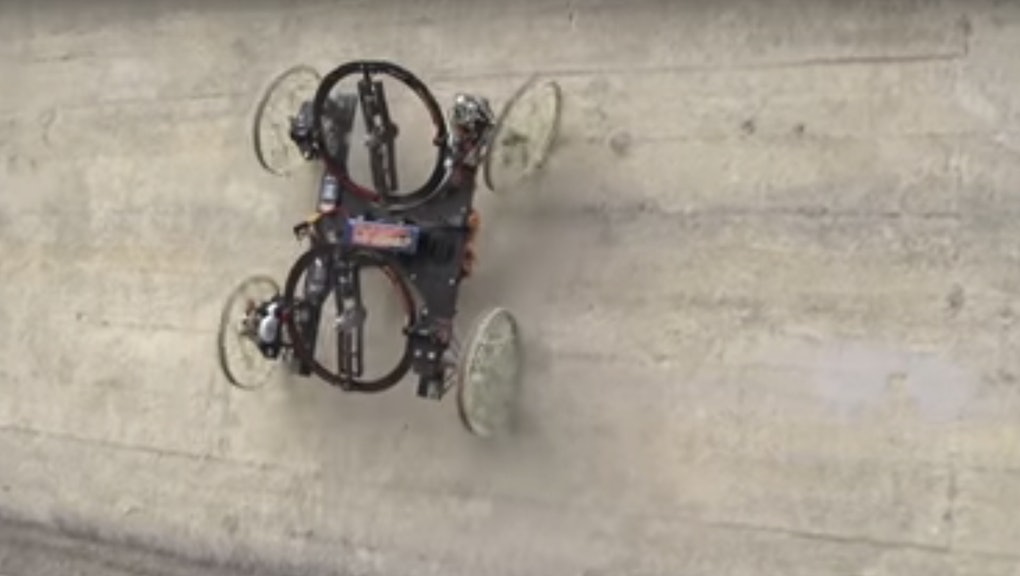 Disney Built a Robot That Can Climb a Damn Wall

The cockroach-like machine is called VertiGo, and it's the spawn of Disney Research Zurich and the technology- and science-focused university ETH Zurich. According to researchers, the gadget's ability to switch seamlessly between the ground and the wall means it can live in both "urban and indoor environments."

It uses adjustable propellers in order to gain enough momentum to travel up a wall, while four wheels — two of which are steerable — provide the horizontal movement. It also contains two infrared sensors that estimate the robot's position in space, which allows the aforementioned components to position themselves properly.

Given the seemingly physics-destroying capabilities of the machine, it's perhaps unsurprising that even the researchers didn't really know what they were doing. The floor-to-wall trick was "somewhat of a step in the dark," researchers Paul Beardsley told IEEE Spectrum. "But it worked."

The VertiGo's wheels aren't physically sticky. Because it relies on propulsion rather than adhesion, VertiGo could theoretically work on any surface, smooth or rough.

The device is apparently as easy to control as the remote-controlled cars of our childhood, though the ability to climb walls like Spider-Man gives Disney's model a tiny bit of an edge. The boundaries don't stop at the walls, either: According to the press release, the robot could theoretically travel along ceilings, too.

There's no word on what Disney and ETH Zurich plan to do with VertiGo — military toy? Kids' plaything? Beer transporter? — but if it ever does become commercially available, we can only hope it will function better than the world's latest motorized obsession.