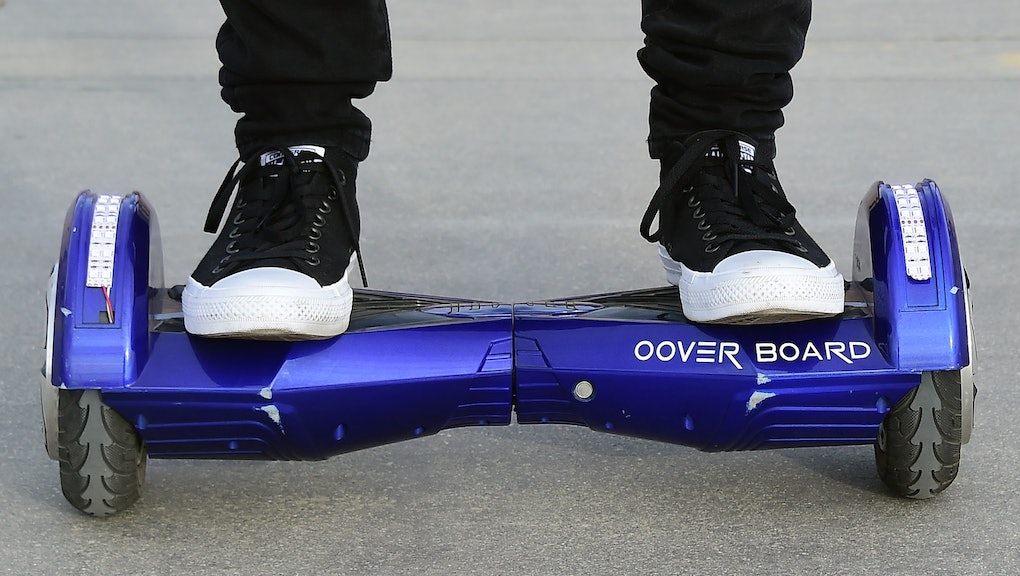 Would You Date Someone Who Has a Hoverboard?

Much to the dismay of reasonable humans everywhere, hoverboards are having a major moment right now. A priest recently used one during a Christmas mass and the Catholic Church flipped a shit. Russell Crowe is freaking out at airport workers who have tried to separate him and his family from their precious fleet ("Goodbye Virgin... Never again"!). Even grandmothers in suburban offices are engaging in wacky #HoverboardHijinks.

Given how popular these unnecessary gadgets have become (reported estimates for hoverboard sales in 2015 vary, but range from hundreds of thousands to possibly 1 million), none of us are safe from encountering hoverboard owners in the coming year.

For single people, this could mean being faced with an ethical quandary. Say you match with someone on Tinder, have decent text chemistry, meet up for drinks and then all of a sudden, it happens: They casually reveal that they own a hoverboard.

Do you fake a family emergency and immediately GTFO? Do you shrug it off and give them a chance, doing everything in your power to cancel out the unsexy mental image you now have of your date hoverboarding around their apartment? Or are you actually someone who might be turned on by the thought of having secondhand access to this trendy item?

In an effort to reach some kind of consensus as to whether the trait of hoverboard ownership is bleak or chic in a potential partner, Mic conducted a survey using Google Consumer Surveys of 500 people ages 18-34. The results are in. And they will be revealed right after this GIF of Mike Tyson falling down in his shiny-floored foyer.

And the survey said...

Since 70% of respondents said hell to the naw, they would not date someone who owned a hoverboard, it seems popular opinion is that hoverboard ownership does not a fuckable (or at least date-able) human make.

Meanwhile, the fact that not even 2% of people expressed indifference suggests it's a debate with nary an inch of middle ground. Either you're in the majority who is turned off by hoverboardfolk, or you're in the 28.6% of the population who likely already owns a hoverboard and therefore can't pass judgment without coming off as a self-loathing hypocrite.

So why do people feel so strongly about hoverboards as a dating dealbreaker? We asked our Tumblr audience if they would hook up with a hoverboard owner, and the results revealed a myriad of solid reasons.

"I can't stand these things," wrote Tumblr user chesieful. "They are so insanely pretentious, and I have yet to talk to a person riding one who was not rude."

Others believed that hoverboard owners were likely to be "wayyy too childish," and that "if a man my age were riding a hover board, I'd laugh at him." Even some actual youths seem to see it as a turn-off, seeing the hoverboard as an indicator that someone might be a lil' too spoiled to be worth a date.

"The whole idea is stupid, and the only people I know who have them are the spoiled kids in the rich part of the city," wrote user jaegersbutt. "Having a hoverboard shows that someone doesn't think twice about wasting their parents' money."

Tumblr user contangere agreed, pointing out it's not the hoverboard itself but what the decision to purchase one represents.

"I don't think it would be wise to judge a person based on what they use," they wrote. "However, because of how unnecessary they are, the amount of money to buy one and lack of practical use, leads to a definite sense of 'manchild-esque' that is [a] definite turn-off for me."

That doesn't even include the weird robot-like vibe they give off, which some people feel weird about. "The auto-balancing skateboard of the future is replacing our men's feet with those of a robot, and we aren't quite sure how we feel about it all," said the staff at the Cut. "Is a man who uses automated technology as a means for transportation capable of being sexy?"

While the majority of our respondents may disagree, the answer for some is a resounding yes. There were even a few Tumblr users who viewed hoverboard ownership not as a dealbreaker but rather a zippy lil' bonus. "I wouldn't say no... ;)" wrote one of our Tumblr respondents, the winky face saying everything words cannot.

So, um, BRB, developing the next successful niche dating app. It's gonna be called Hovr.