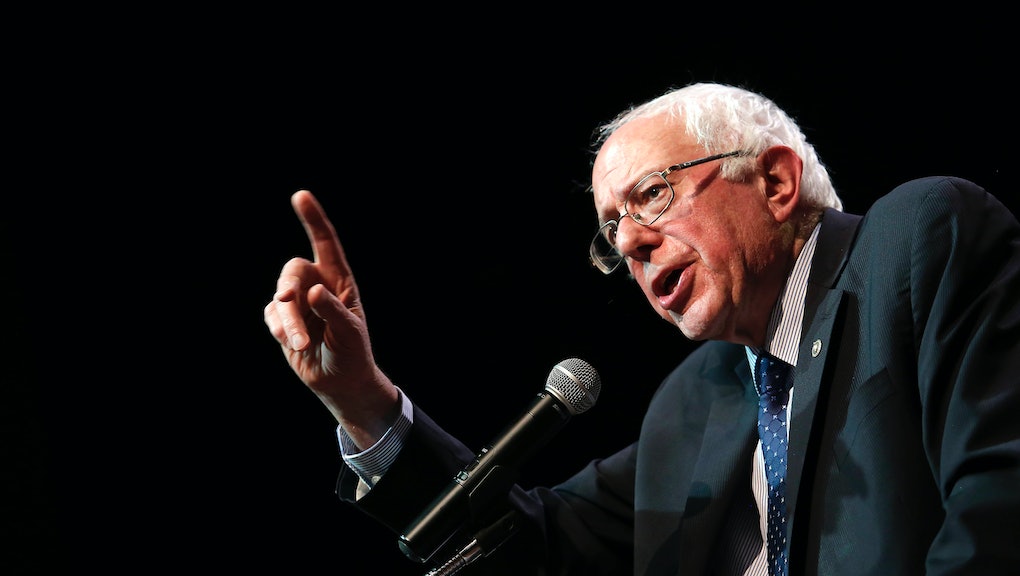 5 Times Bernie Sanders Hit Back at His Critics

Vermont Sen. and presidential hopeful Bernie Sanders is no stranger to critique. For issues like his gun control voting record, Black Lives Matter and democratic socialism, he has practically had to beat his attackers back with a stick during the course of his campaign. Yet time and again, Sanders has addressed his critics head on. As we head into a new year — an election one at that — here are five times Sanders confronted the issues at hand and had "the guts" to stand his ground.

1. Defending his positions on ISIS, climate change and more

More than once, Sanders has been criticized as "out of touch." On a televised appearance on Dec. 8, Sanders responded to a wide swath of his critics' arguments, including defending his views on ISIS and climate change, which he called a "planetary crisis."

2. On his gun control voting record

Appearing on Meet the Press with reporter Chuck Todd, Sanders responded to criticism he's received for his voting history regarding gun control. One particular vote he's been pressed on one to protect gun manufacturers from liability, an issue that permeated the first democratic debate.

"That was a complicated vote and I'm willing to see changes in that position," Sanders said on Meet the Press. "Here's the reason I voted the way I voted: If you are a gun shop owner in Vermont and you sell someone a gun and that person flips out and then kills somebody, I don't think it's really fair to hold that person responsible, the gun shop owner.

"On the other hand, where there is a problem is there is evidence that gun manufacturers do know that they're selling a whole lot of guns in an area that really should not be buying that many guns, that many of those guns are going to other areas, probably for criminal purposes. So can we take another look at that liability issue? Yes, sure."

3. Hitting back after Trump labeled him a "wacko"

During a rally Monday in Nashua, New Hampshire, Trump labeled Sanders a "wacko" for his proposed tax policy, a comment Sanders wasn't about to let fly by unaddressed. "Being called wacko by a pathological liar like Mr. Trump makes me think he is getting nervous that the American people are catching on to his pathetic policies, which include giving hundreds of billions of dollars in tax breaks to billionaires like himself while refusing to raise the $7.25 an hour minimum wage," Sanders said, according to the Washington Post.

On a separate Meet the Press appearance July 26, Todd brought up criticisms Sanders has received for his response to the Black Lives Matter movement, and suggested some think he's been dismissive of protesters. "No I'm not dismissive," Sanders said, "I've been involved in the civil rights all of my life and I believe we have to deal with this issue of institutional racism.

"But we have to deal with the reality that 50% of young black kids are unemployed. That we have massive poverty in the America, in our country, and we have an unsustainable level of income and wealth inequality."

When Todd pressed Sanders that his critics say economic injustice and racism are separate issues, Sanders evoked a quote from Martin Luther King Jr. and argued that economic injustice and institutional racism are parallel problems and he argued for a need to address both. And in August, a Sanders reaffirmed his commitment to the Black Lives Matter movement after a rally for the cause kicked off the event saying, "There is no president, none, one year after the death of Michael Brown, no president who will fight harder to end institutional racism than I will."

Following the Democratic debate in October, Sanders weathered criticism for legislation that passed while he was the chairman of the Veteran Affairs committee in 2014. One of those critics was Paul Rieckhoff, chief of Iraq and Afghanistan Veterans of America. "For far too long [Sanders] was apologizing for the VA," Rieckhoff told CNN. "He was refusing to acknowledge the severity. He was positioning it as a smaller issue than it was while veterans were dying waiting for care."

In late October, Sanders responds to those criticisms on CNN.

"I'm very proud that when I was chairman of the Senate veterans committee received the highest awards from the American legion and the highest award for the veterans of foreign wars," Sanders told CNN. "I received those awards because they knew that I was doing everything that I could to protect veterans' rights and do everything I could to make sure that every veteran in this country got the health care and the benefits they needed in a timely way.