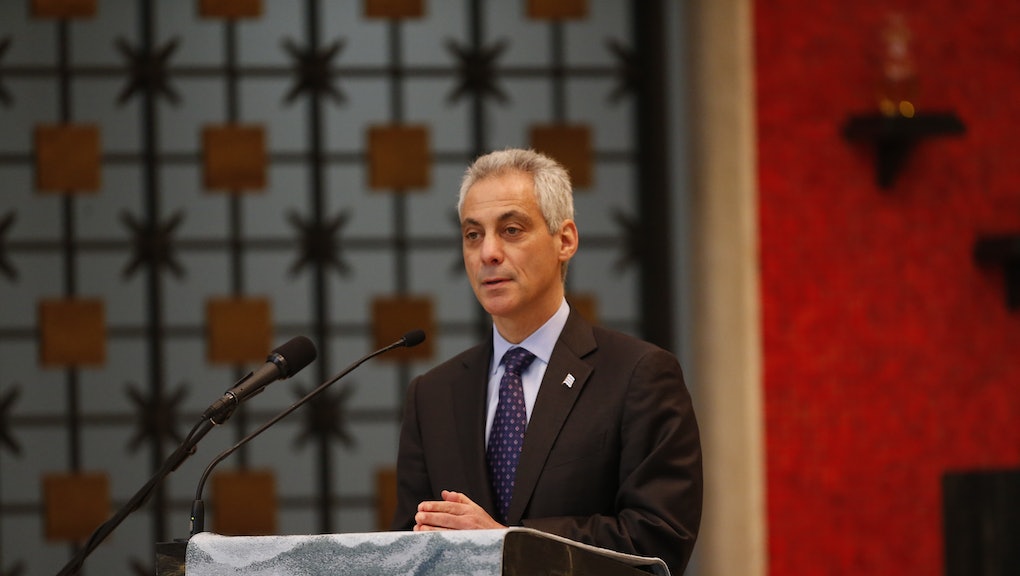 In the wake of searing criticism alleging Chicago Mayor Rahm Emanuel turned a blind eye to — and in some cases allegedly covered up — a series of bloody police shootings under his tenure, the mayor has announced the Chicago Police Department will begin requiring all officers to be trained in the use of and equipped with Taser technology.

"The policy changes center around de-escalation tactics to reduce the intensity of a conflict or a potentially violent situation at the earliest possible moment, emphasizing that the foremost goal is to protect the safety of all involved," Emanuel said in a press conference on Tuesday, according to USA Today.

According to ABC 7, other changes include encouraging officers to call backup before heading into dangerous situations and extending the minimum amount of time an officer has to spend on desk duty following a shooting from 72 hours to 30 days.

The change of policy is motivated by more than a desire to protect Chicago citizens from unnecessary police violence. Chicago officers shot a man named Ronald Johnson in the back on Oct. 12, 2014. Days later, on Oct. 20, city Officer Jason Van Dyke shot a black teenager, Laquan McDonald, 16 times in the back — and Emanuel's office fought to keep the dashboard camera video, which would later prove crucial in bringing murder charges against the officer, under wraps for 13 months.

Earlier this month, the mayor publicly apologized and called McDonald's death "totally avoidable" around the same time his job approval ratings plummeted to 18 percent. Emanuel was up for re-election during the timing of the investigation into McDonald's death, leading critics to argue he covered it up for political gain and call for his resignation.

This weekend, Chicago officers shot and killed 19-year-old Quintonio Legrier and 55-year-old Bettie Jones, a mother of five and a bystander. Both victims were black.

Though Tasers and other less-lethal weapons offer an alternative to firearms when dealing with suspects, they have also been linked to hundreds of deaths between the years of 2001 and 2013 in the United States.

"I think the biggest problem with stun guns is because they are perceived as not-so-deadly force, the constraints on using them are less," Donna Lieberman, executive director of the American Civil Liberties Union's New York City chapter, told the Los Angeles Times. "The reluctance to use them is far less."

"These should be restricted to only those situations where an officer is protecting himself from violence," Justin Mazzola, Amnesty International deputy director of research, told Mic. But instead, they're "being used as a compliance tool" against suspects who are not necessarily dangerous but are disobeying officers' commands.

Simply introducing a new type of weaponry to the police force is also far less than many members of the Chicago community are asking for, especially considering Chicago police have been linked to lethal Taser abuse before.

"This community is under siege, and the police department has two sets of rules, one for blacks and one for whites," Greater St. John Bible Church pastor and local activist the Rev. Ira Acree told USA Today. "It's not just as simple as 'Let's put Tasers on police officers.' But because of the erosion of trust in the community, [Rahm]'s always in a reactionary mode."