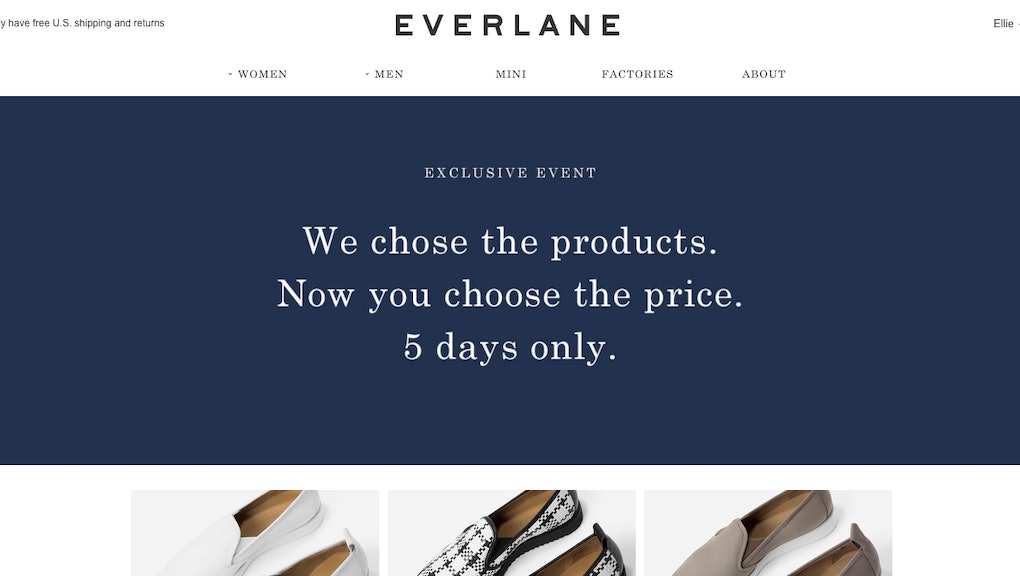 Everlane, the online fashion emporium for solid-colored basics fit for Angelina Jolie, has always made "radical transparency" the most important part of its brand. So for the week after Christmas, for its first-ever sale, it did something radical: Let shoppers pick their own prices.

Here's the setup: For every item on sale, Everlane has slashed the original price and is offering three alternatives. Hover over the lowest price, and you're informed it "only covers our cost of production and shipping."

The "choose your price" promotion, which a representative from Everlane told Mic is its first sale, launched on Saturday after Christmas and continues through Thursday. And it's gotten its fair share of organic promotion, by countless news sites intrigued by the novelty of it.

"We started 'choose your price' as a way to move overstock while still being transparent with our customers about our inventory process and how we mark up our products," the rep told Mic. "We felt that by showing exactly where the money is going for each price choice, we would give our customers a sense of value on each item all while helping us clear inventory."

That is certainly true. But how are shoppers deciding what to pay?

There are people are ponying up. One item, the Italian Ankle-Wrap Sandal, is sold out. The other most popular items, an Everlane rep told Mic, are the Street Shoes, Women's Slim Trousers and Women's Wool Trench.

A rep told Mic they haven't pulled specific sales numbers yet, since the initiative is so new. But Everlane CEO Michael Preysman told BuzzFeed that when the company did a test run of the sale to a small group of customers about two weeks ago, about 10% of shoppers chose the middle or highest prices.

"If I had to guess, because we haven't selected it this way, they might have bought two things at the lowest price and one thing at a mid-price," Preysman told BuzzFeed.

That finding is likely based on the fact that the group included pre-existing Everlane fans who have a good feeling about the company — as a lot of people out there do.

"It's the affinity," Preysman said. "If you're honest and transparent with people, then they'll sort of treat you with decency in return."

But if you aren't already a fan of Everlane ... The "choose your own price" strategy can also backfire. As Melissa Dahl of the Science of Us reported, having to decide what to pay yourself can often be a paralyzing choice, ridden by guilting and morality — and lead us to choose nothing at all.

"People feel bad paying less than what they feel the item is 'worth,'" Dahl writes, "but at the same time they feel conflicted about choosing to pay more than they have to. There's an element of self-worth and guilt involved when morality comes into play, e.g. paying more will help the company, while paying the lowest won't help them at all. You don't want to look stingy and crappy for paying too little, but you also don't want to pay the high price.

"And so the promotion, according to the research, often ends up backfiring, and people end up buying nothing at all."

How many people end up choosing nothing remains to be seen (and Everlane likely won't tell us outright). Dahl, for what it's worth, went that route: "After some deliberating, I closed my browser without making the purchase, which in retrospect feels like an odd reaction."

But judging by the fanbase around Everlane — "we have seen an overwhelmingly positive response on social media, specifically on Twitter," a rep told Mic — there are likely people who will pay the higher price to keep the company going... or want the product so much they go the low-priced route and get in, get out.