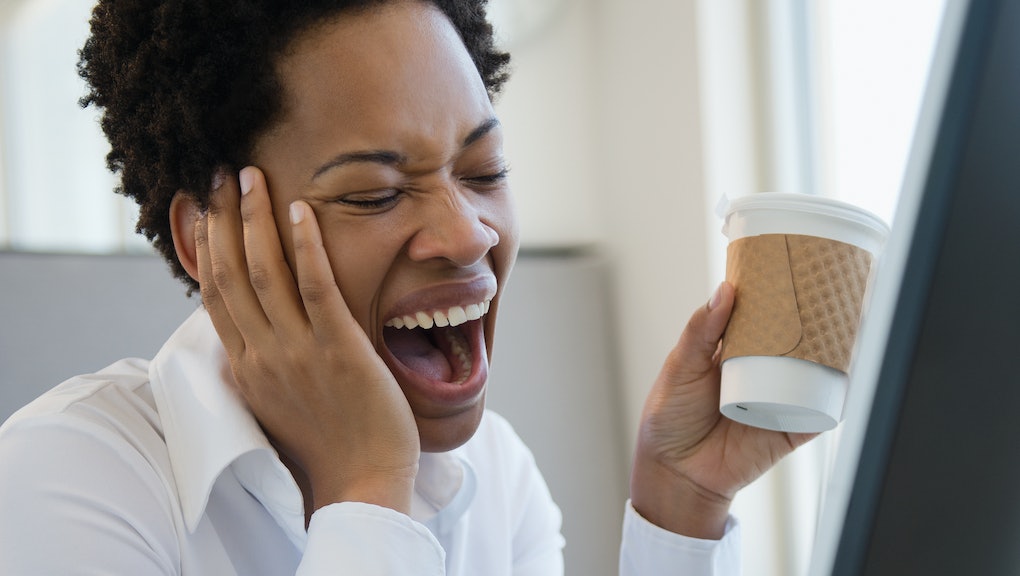 The iced coffee you just slammed should be turning you into the Incredible Hulk, or at least a hell of a living room cleaner. But instead, you sprawl out, listless, robbed of energy. Even though you feel like garbage, you've got a hummingbird's heart rate, like you've been busting out combos in Dance Dance Revolution. What the hell happened?

It's true, you can build up a tolerance to caffeine, but your tolerance probably has little to do with that weird, revved-up fatigue you're feeling. What matters more is what you consume in addition to caffeinating. Even more important is what you aren't doing — sleeping, or drinking plenty of water. Your body can't actually run on fumes, despite what you convinced yourself of during finals week in college.

The science: In your brain, there's a neurotransmitter called adenosine that makes you sleepy. All day long, your body's adenosine gets transmitted to adenosine receptors, piling up in your brain until you need to crash.

Caffeine, however, gets in adenosine's way, so it can't get picked up by adenosine receptors. So it's less that caffeine makes you energized, and more that it doesn't let you feel groggy. If you were totally beat before you drank a cup of coffee, you'll feel exhausted when it wears off after a few hours. (Even then, caffeine's effects may linger: Its half life, or the time it stays in your system, is around six hours.)

That's also why a "coffee nap," drinking a coffee and then taking a quick power nap, is such a righteous combination of sleepiness-spurning efforts. It helps clear your adenosine just in time for that caffeine to kick in.

All day long, your body's adenosine piles up in your brain until you need to crash.

What explains that jittery feeling? When you ingest caffeine, it increases neural activity in your pituitary gland, which tells your mind and body that you're under attack, boosting adrenaline in your system. If you just drank a cup of coffee to help you manage a stressful situation, that plan might backfire.

"If you're feeling stressed, your body releases cortisol, which is really powerful," Susan Albers, author of Eating Mindfully, told Mic. "It puts you into fight-or-flight mode, changing the hormone balance in your body. If your stress is taking off greater than the caffeine, it's going to override it.

"If you have an underlying anxiety disorder," she added, "caffeine is really not good for you."

That's how your sympathetic nervous system gets hit. But caffeine is also a diuretic, which is why you need to hop up and pee more often than usual. Here's where the exhaustion elements start coming into play.

Drinking water is important. "Caffeine dehydrates you," Dr. Victoria Dooley, a physician at Northville Novi Family Medicine, told Mic. "Dehydration causes fatigue. So if you chronically drink caffeine, you're going to get fatigued and not be able to release the same neurotransmitters that make you alert."

When you're dehydrated, your blood itself even changes, becoming thicker. Which might also be why, according to a study published in Human Brain Mapping, caffeine caused a 27% reduction in blood flow in the brain. When blood can't move sufficiently in your brain, you get what's called brain fog. In more severe cases, it results in dizziness, lightheadedness and occasional loss of consciousness.

If you've ever worked out hard after drinking a big cup of coffee, you've probably experienced these effects: Blood flows to your extremities, but its return trip to your brain has delays like Spirit Airlines the day after Thanksgiving, hence some starry eyes and near-blackouts.

The blackouts are probably the most severe effect of caffeine on your body, unless you also suffer from hypertension or high blood pressure, in which case it can be as serious as a heart attack (literally). But your own consciousness is going to make problems for you, too.

"Just knowing we're getting caffeine makes us feel better," Albers told Mic. "But when your body is ready for caffeine and doesn't get it, [people report] withdrawal effects that aren't really there."

By the way, if the part about caffeine and anxiety disorders made you feel lost for what to do for extra energy, Albers has some advice. "You need to get your heart pumping in a natural way," she told Mic. "Trying yoga moves will get your oxygen flowing more but won't impact your norepinephrine or dopamine. When you start changing those levels, you get the negative effects."