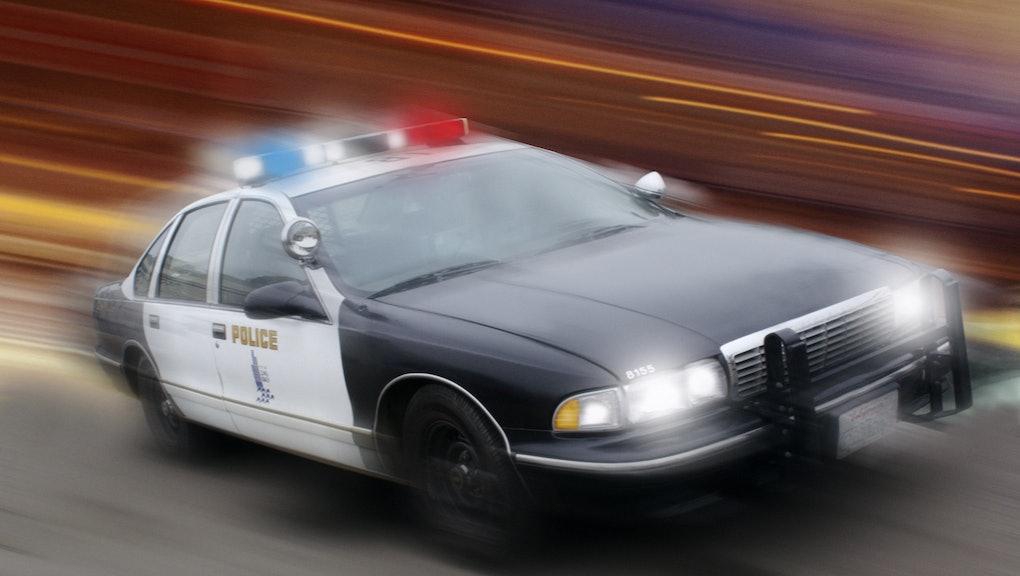 It's the No. 1 cause of injury, death and litigation to police officers — the most dangerous part of police work.

Can you guess what it is? Firearms? Executing search warrants? Arrests gone badly?

Traffic-related incidents were the leading cop killer during 15 of the past 20 years. Every week, officers spend dozens of hours behind the wheel, often at high speeds. These police chases aren't just dangerous to officers and the people they're after, but to anyone along the roads, in their homes or on the street.

A pricey gadget called StarChase could put an end to police chases entirely. It's a launcher that fires a GPS-tracking device from the front of a police car and onto another vehicle. As long as an officer can get close enough to fire the launcher once, the tracker eliminates the need for a high-speed chase.

Seeing it in action looks more like a James Bond or Batman movie than the televised highway pursuits we're used to viewing on local news. The police chase of the future is virtual, and this tech could save thousands of lives.

The way StarChase works is fairly simple. If an officer is tailing a stolen car, for example, she can fire the launcher and send a small tracker several dozen feet ahead. It thwacks loudly against the back of the target vehicle, attaching itself.

The officer can then drop back and watch the tracker from the car. She can pursue the vehicle at a safe distance, waiting for the fleeing driver to stop or reach a safe space. Then the officer can attempt an arrest. In drastic situations, a helicopter can be called in to follow the signal.

Austin has one of the most robust early trials of StarChase in the country. The city averages 130 pursuits a year. In February 2013, the Austin Police Department outfitted 10 of its cars in its East Substation, the area that sees the highest volume of pursuits, with StarChase launchers. Since then, the department has deployed trackers 47 times, resulting in 44 suspect apprehensions — and only one vehicle crash.

The video below was provided to Mic by the Austin Police Department. Watch as an officer deploys a tracker and then pursues the car from a safe distance.

The big problem: "Pursuits are inherently dangerous, so we want to take advantage of new and upcoming technologies to mitigate that risk," Cmdr. Ely Reyes of Austin's police technology unit told Mic. "An officer drives a car 10 hours a day. It's a high-frequency, sometimes risky situation to be in. We have a high number of officer-involved crashes, even where they're not involved in pursuit."

Reyes has been in the police force for 20 years. He can recall three officers off the top of his head who died in car crashes during Reyes' career, and only two who died from firearms. Texas had the highest number of officer deaths in 2015.

Even then, the dangers to police officers are a minuscule part of the problem. USA Today estimated that since 1979, there have been 11,506 civilian deaths in police chases, 6,301 of which were the fleeing driver, and 5,066 who were either passengers or innocent bystanders. The number of potential injuries dwarfs fatalities, which are easier to measure but only a tiny fraction of the harm caused. From USA Today:

Chases aren't just a police problem. And in the meantime, the No. 1 solution is for police not to chase at all.

Handcuffed by the law: The major U.S. crackdown on police pursuit began in 1990 after the Justice Department called pursuits "the most dangerous of all ordinary police activities." Aside from the dangers, what really inspired police to roll back their car chases was that people were starting to sue.

"There were a lot of wrecks and lawsuits, and the general trend became to make policies more restrictive. If you had a restrictive policy, you made it more so," Dennis Kenney, professor at John Jay College of Criminal Justice in New York City, told Mic.

Police departments across the country started tightening up rules on when a police officer could begin a chase, banning pursuits in the case of minor offenses like running a red light or when there was no evidence a violent crime has occurred. In 1991, Omaha, Nebraska, tried banning police pursuits entirely on the heel of a series of multimillion-dollar lawsuits.

"That was a very short-lived policy," Kenney said. "The next day, there was a smash-and-grab in [a] trendy shopping area. As the police pulled up, the guys threw what they had in the back of the car, and the police didn't give pursuit. Citizens were just standing here asking, 'Why didn't you chase?'"

"As the police pulled up, the guys threw what they had in the back of the car, and the police didn't give pursuit. Citizens were just standing here asking, 'Why didn't you chase?'"

This becomes a regular problem with restrictive pursuit laws: Police set up clear guidelines about when they're not allowed to begin a chase, and criminals adjust.

"There are offenders who would deal drugs out of stolen cars when they know law enforcement won't chase stolen cars," Fischbach said. "Bad actors in society are realizing pursuit policies are very strict and they can get away with more they could just a few years ago."

A solution like hitting a car with a GPS dart from afar allows police to get the job done without putting their lives at risk. But if StarChase is so effective, why can't police leaders like Reyes in Austin just put them on every car as fast as they can, instead of just applying it to a meager 10% or so of all pursuits? Why doesn't every police force with regular chases?

Reyes is trying to make it happen. Since seeing the success of StarChase, he's filed an unmet-needs request for money to double the trial. And there lies the problem: getting the money in the first place.

Departments are cash-strapped. The two primary options of ending a pursuit that are used today are tire-deflation spike strips that officers can throw ahead of a speeding car, and simple bumper-to-bumper action. They're obviously more dangerous, but so much cheaper than a system like StarChase. Free, in the case of using a police car to spin out someone on the run.

To outfit a single car with a launcher costs around $5,000 for the first year, with up to $1,000 annually for each car. Most police departments are way smaller than Dallas — 73% of all agencies in the country employ fewer than 25 uniformed officers, and the lion's share of any police budget goes simply into paying police salaries.

When even big cities can face budget cuts that put basic officer training programs on the fiscal chopping block, small-town departments can't prioritize tens of thousands of dollars on high-tech GPS launchers instead of, say, basic personnel costs or more popularly asked-for technology like police body cameras. Even in Austin, they started their trial with StarChase using a grant.

What's more, StarChase-style launchers are a young technology with almost no competition. Silicon Valley-style startups may be interested in cloud services and big data solutions, but they haven't put as many resources into developing an affordable piece of hardware to compete with StarChase.

But perhaps the top barrier for police getting the tools or money they need to fight the dangers of driving is that few people are paying attention.

Police pursuit deaths have a serious visibility problem: Incidences of police brutality and prejudicial practices have set off a new reform movement against police use of force over the past few years. That fire has been fueled by organized activism and the Black Lives Matter movement, driven largely by the sheer visibility of these incidents. Cellphone and body-camera footage of these incidents regularly tear through social media and catalyze entire cities and communities to demand change.

But when a bystander dies during a police chase, there's seldom outrage, footage or cries for reform. Maj. Travis Yates of the Tulsa, Oklahoma, Police Department is a police driving instructor and the director of SAFETAC, a police training company. Yates said the lack of public outcry means little attention is given to solving the problem of driving-related deaths.

"The stark truth is that if citizens are worried about use of force, they're much more likely to be killed in a pursuit than a shootout." — Major Travis Yates

"How many videos of police do you see where the only thing someone did to get them killed was drive to work?" Yates told Mic. "That's why we're not taking pursuit serious[ly] enough. If this was any other police action — if a third of the time there was a shooting, it targeted an innocent civilian or someone innocent was shot during a search warrant — we'd be crying from the rooftops."

Even last week, when the National Law Enforcement Officers Memorial Fund released its year-end report on police deaths for 2015, many headlines focused on the number of officers killed by gunfire, even as traffic-related deaths rose to 52, up from 49 in 2014.

Yates thinks it'll come down to whether people want to start mitigating the deaths and demand a technological alternative, the same way that Tasers have become a surrogate, in the public mind's eye, for the use of police firearms. Pursuit is, in essence, a use of force. It's a potentially deadly use of force like any other, even if it doesn't captivate our collective imaginations.

"The stark truth is that if citizens are worried about use of force, they're much more likely to be killed in a pursuit than a shootout," Yates said. "But nobody's talking about that, and departments aren't taking it seriously because that's not where public interest is."

Until a reform movement against potentially deadly force includes a way to make police driving safer for both police and society, officers can only rely on what they already have — the instinct to chase, spikes on the road, their dexterity behind the wheel and the adrenaline-fueled application of their front bumpers.

"We've had a lot of innocent people who have been injured and killed," Yates said. "Law enforcement doesn't want that, but they're throwing their hands in the air. What else can we do?"