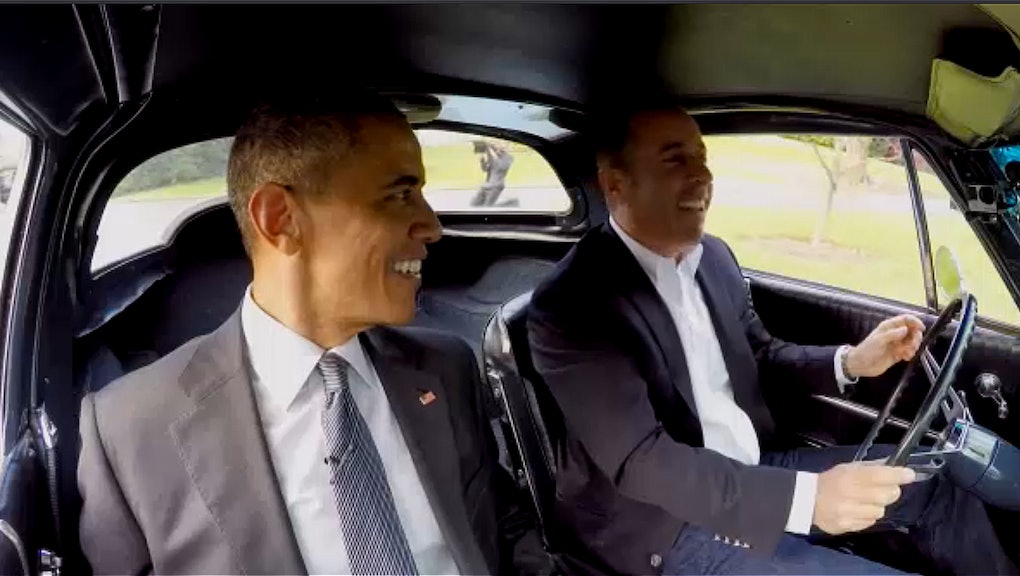 One brand, one color, but multiple pairs. This was perhaps the biggest revelation in President Barack Obama's State of the Underwear address, during Wednesday's season seven premiere of Jerry Seinfeld's Web series Comedians in Cars Getting Coffee.

Appropriately, the episode begins with Seinfeld getting Obama's attention by tapping on the window of the Oval Office. However, the show couldn't to live up to its title as the pair weren't able to get very far in the car before being stopped by the Secret Service. After briefly driving around the White House grounds, the two give up and resigned themselves to the cafeteria.

Obama revealed myriad nuggets about the presidential experience. For example, the demographic with which he performs most well is generally 0 to 8 years old. Because he has 1. big ears and 2. a funny name.

"Yeah, they love me," Obama said. "Partly because I think my ears are big and so I look a little like a cartoon character. And then little kids love saying my name. But it's all one, big name: Barackobama."

Obama also attempted to pull rank by claiming his car was cooler than Seinfeld's 1963 Corvette, because he could call a nuclear submarine from his Cadillac ("I bet you don't have that.")... and it has seat warmers.

"Well, everybody's got that, you know?" Seinfeld retorted.

"This, I like," he said, pointing at the presidential crest. "I'm going to get that."

"You can't have that," Obama said, laughing.

Then came the matter of sartorial decisions: What does Obama's wardrobe look like, who dresses him and — in an instant that calls to mind Bill Clinton's MTV "Boxers or Briefs" moment — what's his underwear philosophy? All of which Obama divulged. His underwear drawer, apparently, is not unlike Batman's closet: rows of identical items of clothing.

Seinfeld also asked how many world leaders Obama reckoned were insane, to which Obama said, "a pretty sizable percentage."

"Some of these people, you must meet them, you must be chatting and you look in the eyes and you go, 'Oh, this guy's gone,'" Seinfeld said.

"And part of what happens is these guys... I think the longer they stay in office, the more likely that is to happen."

"At a certain point your feet hurt, you're having trouble peeing and you have absolute power," Obama said.

That's when you know you should throw in the towel.

The appearance is Obama's latest in a series of non-traditional media appearances he's made in the lead-up to his lame-duck status. In June, he appeared on comedian Marc Maron's WTF podcast. And in March he took his own turn at the stand-up mic, killing it at Washington, D.C.'s Gridiron Dinner, all the while noting, "This lame-duck stuff is fun."

We're enjoying it too, Mr. President.

Watch the full episode below: