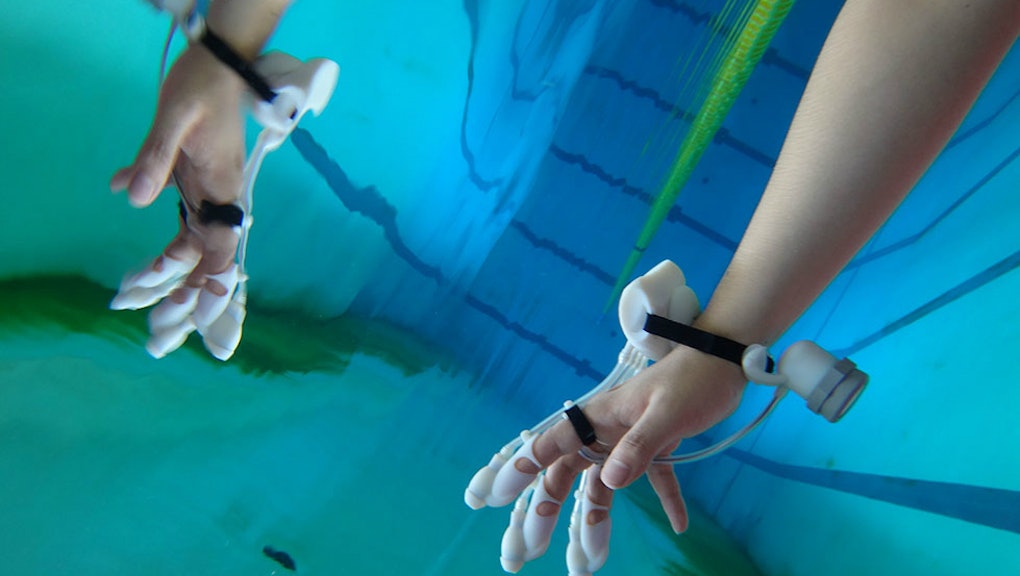 People can go on about the magic of technology, but it's not often a device gives you a literal sixth sense.

Students at Tsukuba University in Japan have created a special glove that uses a long-range sonar sensor to help you feel objects from afar when underwater. The glove was designed by two Ph.D. candidates who wanted to create a device that could be used in a flooding situation to detect objects, debris and hidden surfaces during floods — though they also see the potential for virtual reality situations.

The sensor on the wrist scans the area below, creating a topographical map of the surface below. Then it communicates those elevation changes to your fingers using water jets, giving haptic feedback so you can feel objects in front of you as pressure on your fingertips.

"It extends the sense of touch to feel the topography of a sunken floor in parallel to the wearer's hand in order to perceive objects under cloudy waters where sight is no longer useful," Aisen Caro Chacin, one of the students who developed the project, wrote on his website.

The glove is 3-D printed, so you can make one for yourself with the plans available online, as well as a copy of the demo code. You'll also need a functional knowledge of prototyping, an Arduino Pro Mini, some little water jets and a MaxBotix MB7066 sonar sensor, a waterproof casing and some hot glue.

Check out the full video of the sonar glove in action here: