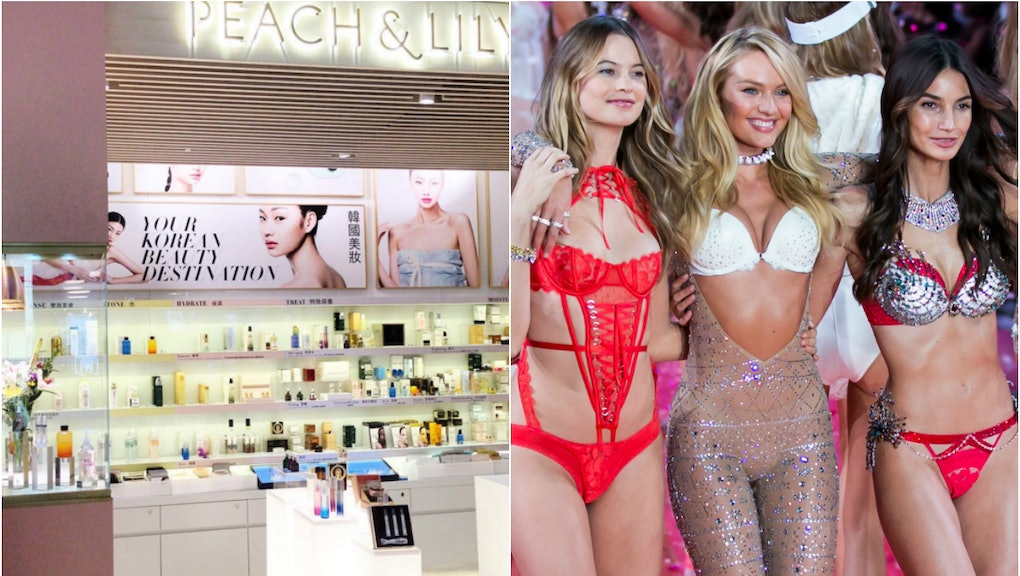 There's Something Missing From the Korean Makeup Beauty Craze

In case you hadn't noticed, Korean beauty products are having a moment.

Ever since the rise of BB creams in 2011, beauty products hailing from South Korea have been all the rage among makeup lovers. Americans' desire for beautiful, luminous skin has come in tandem with scores of techniques, products and hot new brands beloved by Korean women, who achieve seemingly flawless skin with complicated, multi-step regimens and high-tech skincare innovations.

Stores like Sephora, Urban Outfitters and Target are now selling Korean products with major success. Bloomberg Business reported that cosmetics and beauty exports from South Korea to the United States reached $154.1 million in 2014, a near fivefold increase from 2005. That's why it was no surprise when, in November, Macy's announced it was partnering with the online retailer Peach & Lily, which specializes in Korean beauty products, to launch a pop-up shop in New York City.

What was a little surprising: The banner displays above the products feature Asian models.

Seeing Asian models in a product photos and ads about Asian products shouldn't be a rarity. But even as Korean products explode in the U.S., with countless American women of various ethnicities using the products, Asian models remain scarce in fashion and beauty — reflecting the persistent norm of Western beauty ideals across popular culture. We may want the products from Asian countries, but have yet to embrace Asian beauty.

Asian models are breaking through, but are still a small minority. This year's Victoria's Secret Fashion Show, for example, was a slightly more diverse cast than usual, including Sui He, a model from Wenzhou, China, who has been a regular for the brand since 2010, and Ming Xi from Shanghai. Still, only four East Asian models have reportedly ever walked the Victoria's Secret runway.

The high fashion runways have also been embracing more Asian models, like Soo Joo Park, who was born in Korea but grew up in California, and Liu Wen who hails from Yongzhou, China. But their resumes include plenty of "firsts" for Asian models, a testament to how recent those accomplishments are. In 2009, Wen was the first east Asian model to walk for the Victoria's Secret show, and in 2010, she became the first Chinese spokesmodel for Estee Lauder. Park became the first Asian spokesperson for L'Oreal this March.

Overall, Asian models remain a minority: Less than 9% of all models on the runways for the Spring 2016 shows during New York Fashion Week, according to a report by the Fashion Spot. The same pretty much goes for magazine covers, which remain largely un-diverse.

Change has been slow: In November,Teen Vogue cast Fernanda Ly, its first Asian cover star in the magazine's history. Vogue Italia featured its first Asian model on a cover in 2013, while Vogue has reportedly never featured a Chinese model on its cover.

Of 686 magazine covers of major women's magazines counted by the Fashion Spot in 2014, only 53 Asian models made appearances.

Asian beauty still isn't the cultural norm. That lack of representation in fashion and cosmetics — the industries that essentially establish and codify our beauty norms — is reflected across pop culture.

Hollywood continues having a problem with producing films that feature mostly white actors. Asian actors account for little more than 5% of all roles in films in 2014, according to a study from the University of Southern California. When Asian actors are included, they're often cast into grossly stereotypical roles.

For women, that rarely includes being the femme fatale or the sweetheart next door. As Lucy Liu told xoJane in a 2013 interview, "I wish people wouldn't just see me as the Asian girl who beats everyone up, or the Asian girl with no emotion. People see Julia Roberts or Sandra Bullock in a romantic comedy, but not me."

Seeing Asian women as romantic heroines, like seeing Asian models as our utmost paragons of beauty, is a goal that still seems a ways away while Western beauty ideals reign supreme. Those norms travel worldwide, with South Korean women seeking "Westernized" looks from plastic surgeons in a cosmetic surgery boom in their own country.

There's little sign that the Korean beauty trend is waning anytime soon, as the makeup and skincare industries explode with more and more innovations brought from overseas. The real progress will be when Korean beauty itself is recognized with the same excitement, respect and inclusion.