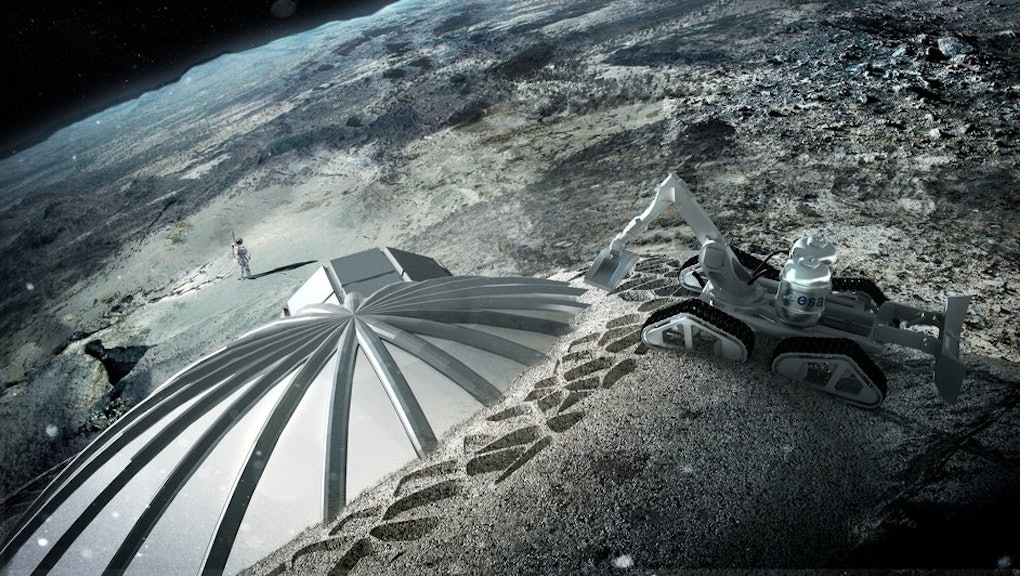 The European Space Agency just reminded the world that it wants to build a base on the moon by 2030, using 3-D printed parts made from materials found on the lunar surface.

The ESA has some competition. Earlier this month, Congress passed a spending bill that would give NASA $55 million to build a space habitat for deep-space exploration, including both the space within the moon's orbit and, eventually, Mars. The only catch: NASA has 180 days to show what it's going to be.

It's a global space race to live on the moon. Around 26 nations want to figure out what that's going to look like.

In the past, NASA has been a big fan of expandable, inflatable modules, like the ones made by Bigelow Aerospace. The ESA's concept art shows buildings made out of the natural elements found on the lunar surface. This idea isn't far-fetched; product designers have used sand to print in the past.

NASA already uses a 3-D printer that's able to print in a vacuum. It can build tools and little bits and pieces for the International Space Station that would otherwise be tremendously expensive to send. If the walls, or even the entire structure, could be built on the moon instead of being shipped, we could have pretty large structures. Earlier this year, an architect revealed his own plans to 3-D print a 2,400-square-foot house using just dust, sand and gravel. And that one had a swimming pool, jacuzzi and garage.

Obviously, a moon base wouldn't need that — at least, not right away. An Italian coffee company sent a zero-gravity espresso machine to astronaut Samantha Cristoforetti, so obviously there's room for a little luxury in the cold darkness of space. But this base would need places to grow plants, which was proven viable earlier this year when ISS astronauts ate red romaine they'd grown in the space station.

While the ESA (and China) are looking at lunar bases in the next couple decades, and NASA is looking at the space in the moon's orbit, SpaceX CEO Elon Musk, who recently proved he could build a reusable rocket and screw with Russia's aerospace-based income, is focused on settling Mars around 2040.

As we count down to the end of 2015 and reflect on all of the major leaps in science this year, it should give space geeks a warm feeling to know that 2016 will include multiple space races — both between Musk and Blue Origin CEO Jeff Bezos, and between all the nations chomping at the bit to rocket humanity deeper into the galaxy.