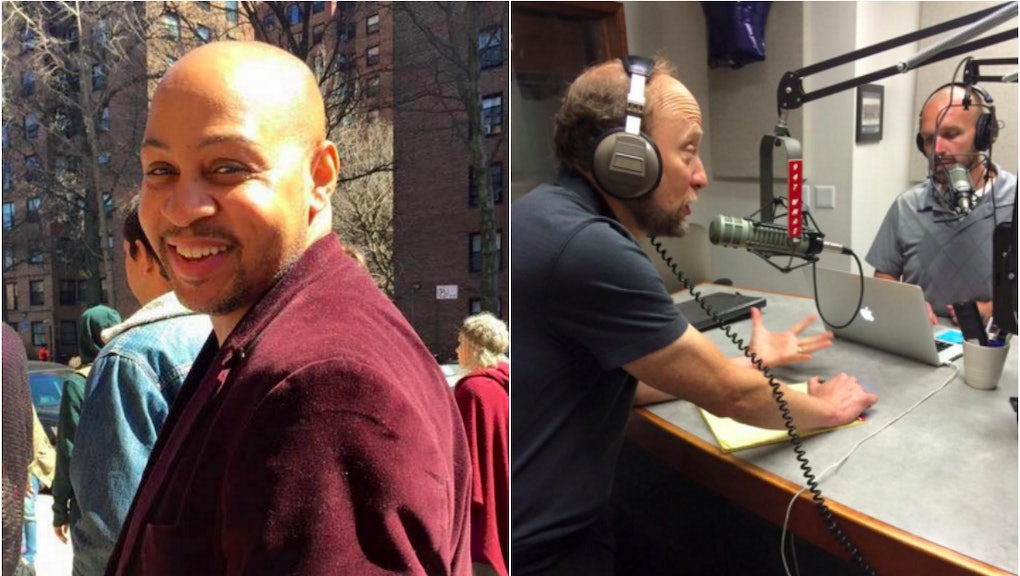 We already knew that some abstinence-only sex education programs slut-shame sexually active teens by comparing them to chewed up candy and gum. That, of course, is when they're being taught anything at all.

What can be done about making sure children learn about sex in an age appropriate way? While the CDC makes recommendations for schools, it's a new breed of fathers who are taking a more active role in what their kids learn — in an effort to combat what they may or may not be learning, as the case may be, outside the home.

Dads learning how to talk about sex aloud: New York-based performance artist, author and educator Mo Beasley is one such father, who traces his outspokenness and advocacy around sex education back to what he was taught — and what was left out.

"'Make sure you wear your safes' was the only sex talk I got from my mom at 13," Beasley told Mic. "She called me into the living room, where she was sitting in the dark, backlit by the kitchen light, smoking a cigarette. I had no idea what safes were and why Ma was acting so grim. My dad, career military, gave me the most in-depth conversation about sex and relationships when I graduated high school. It was a great education about the dynamics between men and women.

"Unfortunately, I was already a father of a 2-year-old baby girl."

That reality motivated him to get honest. "My parents' lack of conversation made me more determined to be forthcoming and candid with my children," he said. That includes using accurate words and not cutesy euphemisms that often skirt accuracy.

"When my 6-year-old, Reina, was in daycare about three years ago, we got called to the director's office because Reina referred to her vagina as 'vagina,'" Beasley said. "The director of the daycare was disturbed by Reina's bad language. The director and I had a rather tense conversation about the use of clinical terms for anatomy verses childish nicknames. When I refused to accept names such has 'Pee-Pee' or 'Kitty,' the director and I settled on the term 'Privates' when Reina refers to her genitalia."

Word choice is crucial, as authors Cory Silverberg and Fiona Smyth make clear in their illustrated children's book Sex Is a Funny Word. The book, which came out in July, is aimed at children ages 7 to 10 and gives both parents and kids language they need.

"There are a few places in the book where I want to challenge parents to think about how their actions may conflict with their words, and how this can be confusing for kids," Silverberg said in an interview with Lambda Literary. "I don't know if 'sexy' is a good or bad word, but I know it can be confusing for a kid to be told that 'sexy' is a bad word and then see it everywhere without any critical comment."

"We got called to the director's office because Reina referred to her vagina as 'vagina' ... I refused to accept names such has 'Pee-Pee' or 'Kitty.'"

Other good books, recommended Dave Robens, a men's group facilitator in Vancouver and father, are It's NOT The Stork and It's So Amazing, written by Robie H. Harris for kids ages 7 and up.

Consent is an especially tough one, especially since some of us may not consider that in the typical "sex ed" conversation. Kyle Belanger, a journalist, professor and father, used porn star Stoya's accusations of sexual assault by James Deen as a launching pad to broach the topic of consent said on his Ask Your Father podcast. In an accompanying blog post, he wrote, "I'm calling for dads everywhere to begin to model a Culture of Consent and Human Respect in their everyday lives. ... Give your children the tools and words to name kindness and cruelty. Allow them the right to express ownership of their bodies. Do so yourself."

That said, kids are likely more fixated on the simpler topics.

"Give the most basic and succinct answer to a child's question about sex and if their curiosity isn't satisfied, turn it up in careful increments," Beasley said. "For example, 'Where do babies come from?' is a classic question." He suggests responding with, "From their mommy and daddy." If the child has further questions, "keep it clinical and truthful," Beasley said. "If the children get more graphic with their questions, I meet them there."

Fathers eager to learn: Of course, it's not always so easy for dads. That's why groups like one in the Bronx, New York, called Fathers Raising Responsible Men, which, according the New York Times, aims to reach about 800 black and Latino families. There are also workshops like the Children's Aid Society's Family Life and Sexuality Education (FLSE) programs, developed by Michael A. Carrera, which received federal funding in 2010.

According to Beasley, who has also taught FLSE workshops, "I would point a dad in that direction first. Sitting in on one of their workshops or presentations would be most helpful."

But really, the dads who seem to ace it best are the ones who are totally honest — including talking about pleasure, as Ferrett Steinmetz did in his 2013 viral Good Men Project post titled "Dear Daughter: I Hope You Have Awesome Sex."

"I won't tell you sex is bad, or that you're bad for wanting it, or that other people are bad for wanting it from you if you're willing to give it," Steinmetz wrote. "I refuse to perpetuate, even through the plausible deniability of humor, the idea that the people my daughter is attracted to are my enemy."

Or like the Reddit user known as t-away-man, who won the internet's heart when he laid out four pieces of advice for his kids for knowing whether they were "ready." You're ready for sex, he wrote, if you are...

The fourth piece of advice was a more practical matter for where to have sex. Because, after all, a father might know best from his own screw-ups.

"I discovered the hard way that my oldest [child] learned the most from me when I was frank about my fuck-ups as a teen," Beasley said. "I became more human to her and less judgmental."