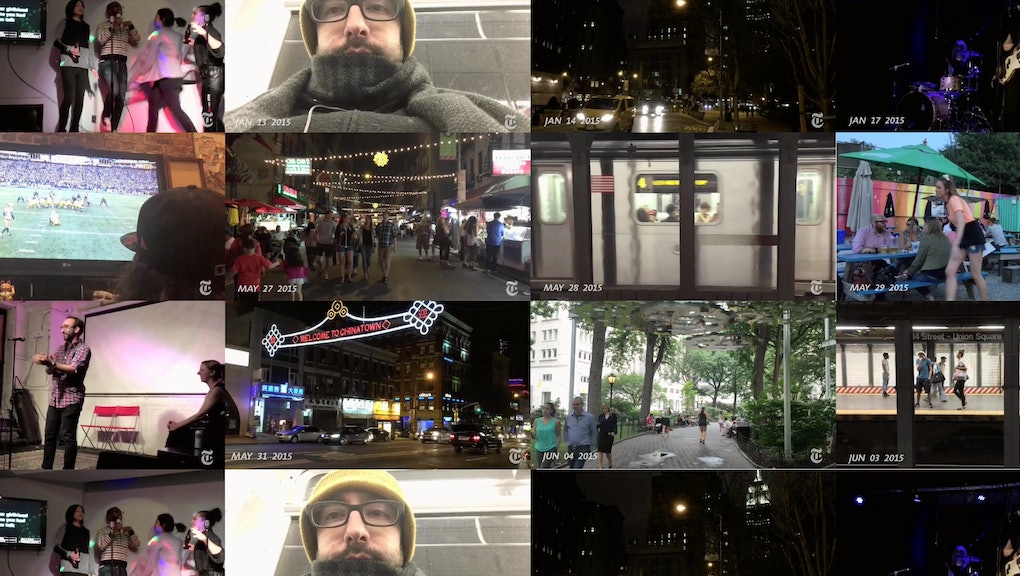 If, as writer Annie Dillard once said, "How we spend our days is, of course, how we spend our lives," how many of our lives would consist solely of watching Gilmore Girls on Netflix? If Dillard is right, you could carry out this logic right down to the second. Somehow, all of these moments accumulate and create a fully realized portrait of our lives. Or, in the case of New York Times reporter Daniel Victor, a video.

One year ago, Victor began recording a one-second video every day for the rest of the year using the aptly-named 1 Second Every Day app. He missed a few days but made up for them on others, resulting in 365 snippets.

Victor thought the project would inspire him to seek adventure on a daily basis. That, of course, turned out not to be the case. "The couch maintained its allure, and it turns out a lot of days consist completely of going to work, going home and falling asleep," Victor wrote in his Times piece.

But with each new "shoot" Victor started to discover what the co-creator of the app, Cesar Kuriyama, set out to accomplish. "The videos [Kuriyama] selected weren't necessarily of the most memorable second in each day," wrote Victor. "If he missed that second, or if he was too busy living it to get his phone out to record it, he might take a video that would remind him of that moment, like the wall just outside the spot where he had a meaningful conversation with a loved one. To others, it would be just a wall, but to him there is a memory attached."

Victor did something similar: When he was at a loss for what to use his one second — barely more than a snapshot — to capture, he recorded the movements of New York City. Sometimes he failed altogether, but more often it was a good sign. And even if the final result wasn't what Victor expected, he noted that it was authentic in a way our social media presence often fails to be.

"I often made it through a memorable night and realized I had neglected to take a video," he wrote. "But being too present in an experience never felt like that bad a fate."