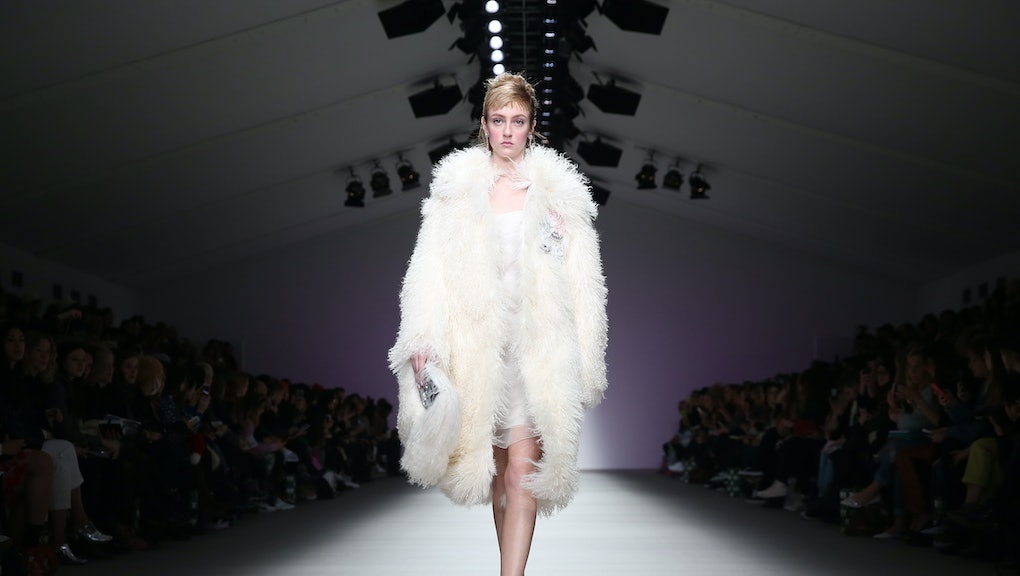 It was a big year for fur in fashion.

We may be living in an "ethical consumer" age, but some of the year's most coveted fashion items were made of the material, from Gucci's fur-lined loafers to Fendi's furry sneakers. The number of fur items in stores reached a 15-month high in fall 2014, according to data tracker Edited, with 92% more products online than in 2013. The runways were awash with fur at the most recent Fall Fashion Week, thanks to designers like Jason Wu, who told the New York Times he was happy to "reimagine it through my lens, for my generation."

Meanwhile, more and more of us are vegetarians, not to mention want to buy from brands with a "positive social and environmental impact." Designer Stella McCartney, a longtime vegetarian, told the Guardian, "I've been speaking to younger women about it recently and they don't even want real fur."

So what's going on?

The current attitudes toward fur in the fashion industry are full of contradictions — especially because the younger generation of shoppers aren't enthusiastic about wearing it, but don't seem to mind it in stores.

And yet fur seems to be booming. It seems that while many of us aren't comfortable wearing fur ourselves, we don't feel strongly about the ethics of it, nor do we judge so much when other people wear it.

Goodbye PETA protests, hello fur-covered celebrities. In an era of Twitter backlash for just about anything a celebrity does, there's been markedly little criticism of the countless stars who sport fur clothing around Hollywood.

Celebrities like Beyoncé and Lady Gaga have been seen wearing fur, while the Kardashian-West family is practically covered in it from head to toe (including, apparently, North West) — all with little public criticism, save for a recent Rihanna incident. The last major anti-fur flour-bombing — of Kim Kardashian, of course — was way back in 2012. Meanwhile, "fur stoles have become the must-have item of the season," wrote People StyleWatch of recent red carpet appearances, and Beyoncé special-requested the furs in her and Nicki Minaj's "Feeling Myself" video.

The celebrities, of course, are often outfitted by high-end fashion designers, the kind who cater to a deep-pocketed — and likely older — shopper. And yet designer stores with younger clientele are stocking fur too, furrier Nick Pologeorgis told the New York Times.

"We sell in specialty boutiques like Otte and Scoop, where young people shop," Pologeorgis said.

Karen Groner, adjunct professor of fashion design at the Fashion Institute of Technology, told Marketing Daily in 2014 that her students are more interested than ever in learning about fur. "They're in love with it. I have never seen such overwhelming interest," she said.

The boom in faux is a sign of the times. Thanks to the classic trickle-down effect of fashion trends, faux fur has also become more popular than ever — which is one reason fur as a trend may persist even as some younger people seem to recoil at the thought of wearing animal pelts.

The quality of fake fur has gotten better than ever. "Today, it's sometimes hard for even me to tell up-close what is real and what isn't," Pierre Grzybowski, manager for the Fur-Free Campaign of the Humane Society of the United States, told the Los Angeles Times in 2013. "That's how amazingly good some of the newer fabrics for faux fur are now."

Wearing faux fur is also totally socially acceptable and shame-free — thanks, ironically, to the designers who have jumped the tracks from the real fur to the luxury faux fur train. Designers like Kate Spade and McCartney are eschewing the real stuff for high-quality imitations. Hugo Boss adopted a policy of not using fur this year, and Ralph Lauren, which has long had such a policy, showed runway looks this season that looked like fur but were actually byproduct shearling.

A lengthy list of retailers and designers — including fast-fashion giants catering to younger shoppers like H&M, Forever 21 and Zara — are also fur-free.

The verdict on fur: "Meh." The popularity of faux over the real thing may be less about ethics and more about cost.

"If it's furry, I am for it," said Gabriella, 24, who donned a faux fur coat for a recent night out in New York City. While Gabriella said faux or vintage fur is ethically preferable to new, she liked the look enough that it wasn't that much of a concern. She told Mic she bought her coat half-off on Black Friday, and that she couldn't afford real fur nor full-price faux (which, while less expensive than the real thing, can still be pricey).

Of course, our increasingly green lifestyles may dictate we keep our real fur choices quiet, or at least have some solid explanations ready. Gabriella was quick to say her coat "definitely isn't anything real"; when Miranda Lambert was recently criticized by fans on Instagram for a fur coat she received from her grandmother, she quickly posted a photo that made it clear the jacket was a pre-existing "heirloom."

As for faux, McCartney is making sure to put "Fur Free Fur" labels on her new faux coats, the Guardian reported. The Humane Society and other organizations offer anti-fur buttons so faux fur wearers can "avoid inadvertently sending the wrong message," a Humane Society representative told Mic in an email.

And yet we might not be judging others so harshly. In Mic's survey of 18- to 34-year-olds, nearly 62% said that a "green" mindset is not necessarily inconsistent with the use of fur. Only 37% said wearing fur and other "green" ideals like eating vegetarian should go hand-in-hand.

Tellingly, a few news outlets raised an eyebrow when Beyoncé, newly declared vegan, showed up to lunch in a fox fur-topped jacket. But no one pelted her with red paint or flour. If we had to guess, more than a few Beyoncé fans probably went out and bought themselves their own faux versions at Forever 21.