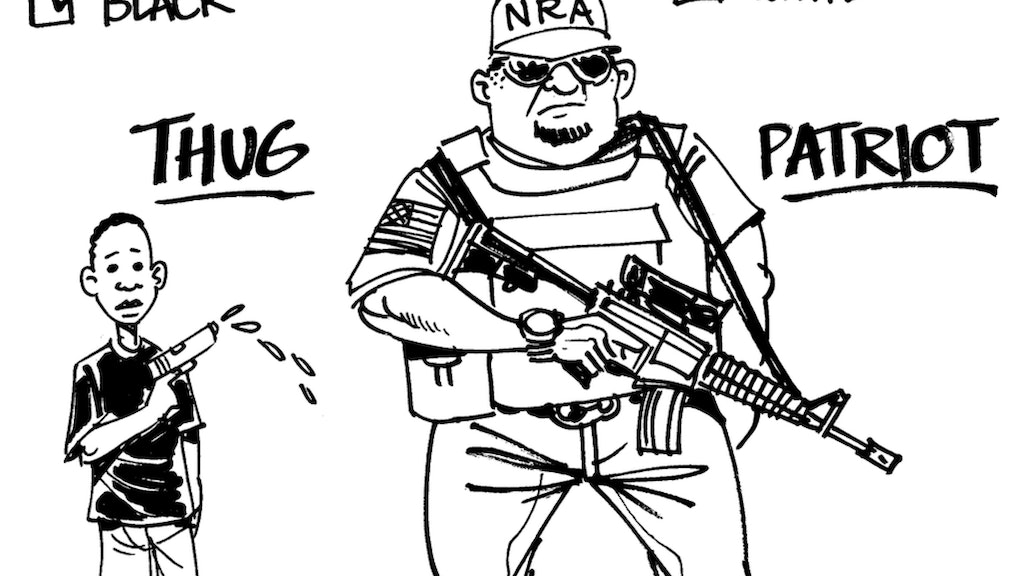 On Saturday night, a group of armed militia members seized control of the remote headquarters building for the federally owned Malheur National Wildlife Refuge outside of Burns, Oregon. Their ranks include Ammon Bundy, son of Nevada rancher Cliven Bundy, who successfully held off Bureau of Land Management agents attempting to collect his cattle over unpaid taxes last year in a similar standoff.

They've earned only a tepid response from authorities so far, and the Bundys' previous armed rallies earned widespread support, leading some to conclude the mostly-white militants are benefiting a racial and political double standard. Just last week, a Cleveland police officer who shot and killed 12-year-old Tamir Rice, a young black boy holding a toy gun, was let off without an indictment despite opening fire within seconds of arriving at Rice's location.

Cartoonist Carlos Latuff explored why heavily armed white men committing crimes might get treated with kid gloves while police can shoot black kids like Rice with few consequences in a clever cartoon that's an apt description of the current situation. Hint — it does have something to do with political power and race:

On his Twitter account, the often-controversial cartoonist said many Americans had responded to him by justifying Rice's death and saying they supported the militia members.

Unlike Rice, who was ultimately proven to have posed little threat to anyone, the men who have taken over the federal refuge in Oregon claim to be deadly serious about their willingness to use force.

In a Facebook video, a spokesman for the men who took over the refuge said, "this will become a base place for patriots from all over the country to come and be housed here and live here. And we're planning on staying here for several years ... we're the point of the spear that's going to bring confidence and strength to the rest of the people and we're calling people to come out here and stand ... we need you to bring your arms and we need you to come to the Malheur National Wildlife Refuge."