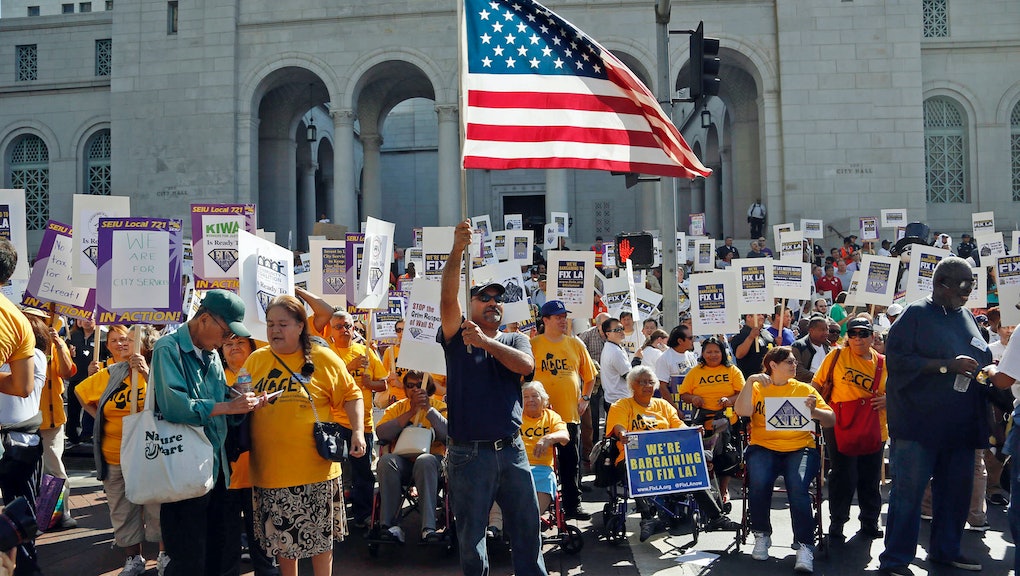 A drastic increase to the minimum wage was a contentious issue in 2015, with Walmart, the infamous Gravity Payments and a handful of states and cities pledging to increase their base hourly rates. 2016 isn't off to a bad start, either: On Jan. 1, 14 states across the U.S. increased their minimum wages, according to Reuters. In California and Massachusetts, the minimum wage jumped from $9 to $10 per hour, the biggest of the New Year's increases. As USA Today reported Monday, California will be among the states to "consider statewide $15 pay floors through legislation or ballot initiatives" in 2016, an issue that continues to gain momentum across the country.

"I expect there will be even more energy around the issue of stagnant wages and economic inequality in 2016," said Christine Owens, the executive director of the National Employment Law Project (NELP), "and an intense focus on what our elected officials, employers, working people and voters can and should be doing about it."

Following demonstrations by the city's fast food workers — organized by the Service Employees International Union — back in November, NBC Los Angeles reported that the Los Angeles city and county had committed to raising the minimum wage to $15 per hour by 2020. According to NBC, another proposal would bring a $15 minimum wage to the entire state by 2021. The measure — called the California $15 Minimum Wage Initiative — could find its way to California's Nov. 8 ballot. 2016 won't be the year California's workers receive a base pay of $15 an hour, but the state will begin taking steps in that direction if the initiative passes.

Seattle was the first city in the country to approve a $15 minimum wage, its city council passing a gradual hike unanimously in June 2014, according to CNN. San Francisco followed suit in Nov. 2014, voting to increase its minimum wage gradually until it hit $15 in 2018. In July, New York also approved a $15 minimum wage for fast food workers within New York City and a target of 2021 throughout the rest of the state, Time reported.

And according to NELP, Massachusetts has scheduled the raise for home health care workers by 2018, and will start "phasing in" its minimum wage measures by 2017. City and contract workers in Missoula, Montana; Pittsburgh, Pennsylvania; Greensboro, North Carolina; Portland, Maine and Milwaukie, Oregon have already received their pay bumps, NELP reported. And should Bernie Sanders win the 2016 election, a national increase to the living wage will be a priority for his term in office.