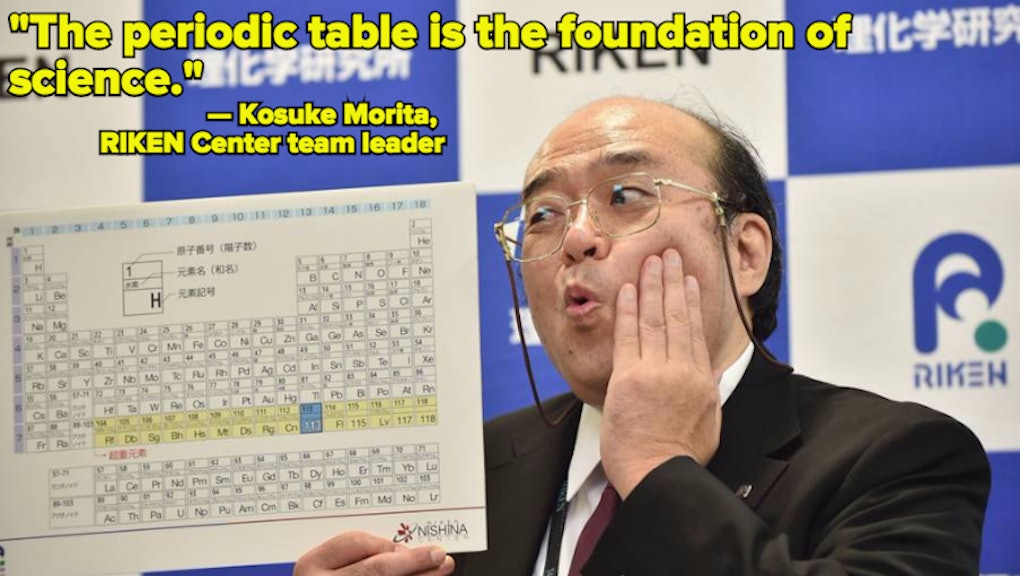 Scientists in Japan, the United States and Russia have officially discovered four new elements, at last completing that gap-toothed seventh row of the periodic table and, as the Guardian artfully describes, "rendering science textbooks around the world instantly out of date."

Thanks a lot, science.

The International Union of Pure and Applied Chemistry announced Wednesday the formal acceptance of these four elements, after the vanguard scientists made sufficient cases for the chemicals' existence.

IUPAC "has reviewed the relevant literature for elements 113, 115, 117 and 118 and has determined that the claims for discovery of these elements have been fulfilled," they announced on their website. "The seventh period of the periodic table of elements is complete."

For the discovery of elements 115, 117 and 118 — or ununpentium, ununseptium and ununoctium, respectively — the IUPAC credits the two-country collaboration between the Joint Institute for Nuclear Research in Russia and Lawrence Livermore National Laboratory in the United States.

The 113th element — ununtrium — caused somewhat a of a stir, however, when the Russian-American team and a Japanese team at the RIKEN Center both claimed to have discovered it. IUPAC could only choose one winner and ultimately credited the Japanese team.

The names of the elements are only temporary placeholders as the discoverers have been given the opportunity to come up with the official names.

"The proposed names and symbols will be checked by the Inorganic Chemistry Division of IUPAC for consistency, translatability into other languages, possible prior historic use for other cases, etc," the IUPAC said. "New elements can be named after a mythological concept, a mineral, a place or country, a property or a scientist."

The new elements will occupy a place on the periodic table reserved for unstable, "superheavy synthetic elements, which have no practical use because these elements decay too fast due to their short half-lives," the Science Times explains.

Scientists and geeks around the world rang in the new year with extra verve, as excitement rippled throughout the community.

"The chemistry community is eager to see its most cherished table finally being completed down to the seventh row," professor Jan Reedijk, IUPAC's Inorganic Chemistry Division president, said in the statement.